Perhaps three airports, extensive new rail, electricity, water and road infrastructure, along with a port expanded to be the largest coal terminal in the world, were in the offing

The report was completed before Campbell Newman’s government was unceremoniously dumped by a Queensland public, a significant portion of which was pretty angry the Liberals were prepared to pay out hundreds of millions of taxpayer dollars for the rail infrastructure the Galilee coal fields need to go ahead.

The nine mines proposed for the Galilee could create more carbon emissions than entire nations, like the United Kingdom, Australia, and South Africa, and hundreds of millions of tonnes of coal would be shipped through the Great Barrier Reef annually.

The environmental impost has always been justified by the supposed economic development the mines and associated infrastructure would bring.

Yesterday, Fairfax’s Lisa Cox added Queensland Treasury to the list of analysts who believe that, irrespective of the ecological damage they’ll wreak, the projects are unlikely to stack up economically either.

The Treasury communications, now published on government Right to Information disclosure logs, tell the story of public servants trying to mitigate the economic risks and potential damage of a political obsession with big coal.

Jeff Seeney, Newman’s Deputy Premier, was pushing against a roaring headwind of Treasury concern in late 2014 to seal the deal on a government hand-out of up to $300 million to finance rail infrastructure that would allow mining companies to export from the Galilee.

The biggest of them, Adani, was chosen as the “first mover” which would repay the soft loan to get the rail infrastructure up as its multi-billion dollar mine, rail and port projects came on board.

But the analysts at Queensland Treasury had doubts as to whether the loan would be repaid at all. In fact, people like Jason Wishart, the Principle Commercial Analyst at Projects Queensland, were worrying about exit strategies.

Days before the Newman government signed a memorandum of understanding to formalise the rail-subsidy offer in November last year, Wishart wrote that Adani’s projects were “unlikely to stack up on a conventional project finance assessment”.

The “DP” – presumably the Deputy Premier Jeff Sweeney – was “keen to be able to have direct discussions with Mr [Gautam] Adani himself in November,” the Minister for State Development, Infrastructure and Planning’s Chief Economist wrote a the month earlier.

But in the hundreds of pages of Treasury emails covered by the Right To Information disclosure, the project is variously described as “effectively an Indian energy market play not a coal project”, a “risk”, “heavily geared” and “highly susceptible to cost shocks”.

On November 30, the Executive Director of Projects Queensland, David Quinn, writes to the Under Treasurer that “any answers I provide are unfortunately 'best guess' based on the veneer of information we have to date”.

That was nearly two weeks after the MoU for the rail line was signed, a formal offer to Adani to lock in a provisional subsidy deal within 30 days, with a view to entering into a binding agreement within 90.

The political drive to sign Adani up, and unlock the Galilee Basin, was also jarring against escalating frustration from large segments of the public. 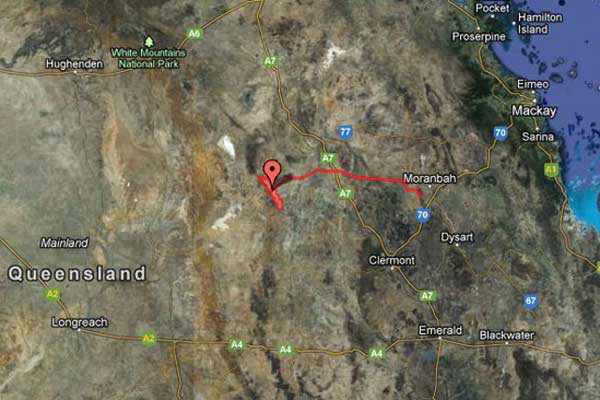 Adani has been plagued by court cases, one of which has revealed the tax, job creation, and royalty figures touted by the coal giant are likely to be wildly exaggerated, as well as protests, a divestment movement driven by citizens concerned about the ailing Great Barrier Reef, and an exodus of 11 major international banks which have ruled out financing the projects.

Last week, Guardian Australia revealed that Adani has asked four of its major engineering contractors to stop work, and the company later admitted it is “synchronising [its]budget” due to “changes to a range of approvals” which have stretched out over a five-year period.

In November 2014 when the federal government asked Infrastructure Australia to undertake its audit of the north it was reasonable to identify the Galilee Basin as a “key growth area”.

As time goes on though, the Galilee’s prospects are looking as remote as the mine sites planned for it, with the freshly elected Labor government has pulling the rail funding offer.

The “economic opportunity” for miners in the Galilee appears increasingly tenuous, with export coal losing 60 per cent of its value over the last five years, and the biggest of the projects has stalled its advance.

The “requirement for economic infrastructure” identified by Infrastructure Australia remains, but not the justification for it.

Importantly for the coal companies looking to bed down a massive export industry, an enabling government also endures: The Abbott government looks set to jump ship where Newman’s left off.

In the Senate Estimates of late May, it emerged that Infrastructure Australia had no idea just how much money would be available for developing the nation’s north when it completed its audit late last year.

The group didn’t even find out about the $5 billion Northern Australia Investment Facility until it was publicly announced in the budget, the organisation’s Director of Financing and Funding, Paul Roe, told Greens Senator Janet Rice.

Since then, Roe said, Infrastructure Australia has “been in contact with the Treasury and the area of the Treasury that is responsible for developing the evaluation criteria [for the facility]”.

That criteria, yet to be announced despite the fact the scheme opened to submissions yesterday, will likely take in the Galilee coal fields.

Finance Minister Mathias Cormann told parliament in May that the loan facility “will be available to help us leverage private sector investment in the important productivity enhancing, job creating infrastructure of tomorrow”.

Cormann refused to rule out the proposed Galilee Basin developments his government supports but, under questioning from Greens Senator Larissa Waters, he did reiterate that he “believes coal is good”.

“It’s an industry, he said, “I would like to see continue to see grow and prosper”.

More recently, Attorney-General George Brandis proclaimed coal to be “very good for humanity indeed”. At one point, Tony Abbott even praised Adani’s Galilee mine, which would be the largest in Australia’s history, as a poverty busting “miracle”.

The Newman government might have failed to deliver the “miracle” of a massive expansion to Queensland’s coal industry, but Joe Hockey now has a chance at another shot.

As Queensland’s Treasury boss wrote in one email, trying to dodge a meeting with his counterpart in Sweeney’s department as it pursued a political campaign to deliver the Galilee, “I would prefer to keep at arm’s length at present, and not get trapped into a set-up”.