A rising young Liberal star has tonight broken party ranks over plans to give ministers the power to strip Australians of their citizenship rights if they’re accused of terrorist activity.

And Hawke knows a bit about extreme. He’s the former president of the NSW Young Liberals and a card carrying member of the religious right faction of the party.

A few hours ago, he unleashed his Godly fury in an oblique but scathing tweet.

While Hawke’s tweet didn’t specify exactly which ‘extreme views’ aired on the Q&A episode upset him, it’s obvious he was referring to Ciobo’s support for the Abbott Government’s citizenship rights policy. 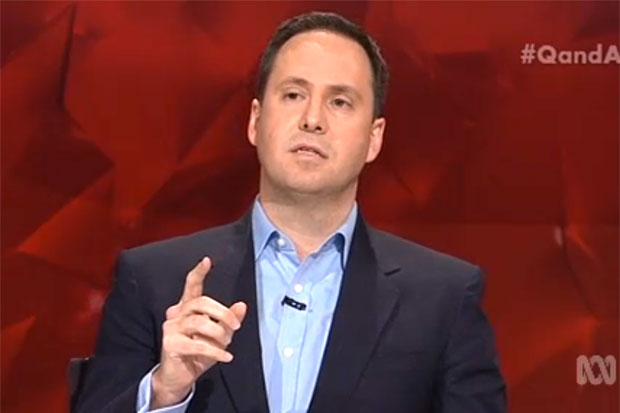 Ciobo made the statement after audience member Zaky Mallah asked him: “As the first man in Australia to be charged with terrorism under the harsh Liberal Howard government in 2003, I was subject to solitary confinement, a 22-hour lockdown, dressed in most times in an orange overall and treated like a convicted terrorist while under the presumption of innocence. I had done and said some stupid things, including threatening to kidnap and kill, but in 2005 I was acquitted of those terrorism charges. What would have happened if my case had been decided by the minister himself and not the courts?”

Ciobo replied: “My understanding of your case was that you were acquitted because at that point in time the laws weren’t retrospective. But I’m happy to look you straight in the eye and say that I’d be pleased to be part of the Government that would say that you were out of the country. I would sleep very soundly at night with that point of view.”

It’s likely Hawke is upset at the fact the proposed Abbott Government policy flies in the face of everything the Liberals purport to stand for, such as ‘small government’ and ‘support for democracy’.

Under Australian law, it has always been the role of courts to determine the criminality of individuals. Granting a political figure the power to strip away citizenship rights without evidence is unheard of under the Westminster system of government.

Hawke indicated in his tweet that he has already written to the head of ABC, Mark Scott, demanding action.

While he’ll likely be completely ignored – Hawke calls for the abolition of the ABC at least three times a day, usually before breakfast – the move is likely to revive debate about government MPs placing pressure on public broadcasters.

In April, Communications Minister Malcolm Turnbull demanded that the CEO of SBS television take action against journalist Scott McIntyre, for a series of provocative and truthful tweets about Anzac Day.

SBS, of course, refused to bow to government pressure, and Mr McIntyre was instead promoted.

New Matilda understands the ABC is now also considering a fightback, by doubling Tony Jones’ annual salary to almost $800,000, thus sending a clear message to the federal government that it will not bow to government pressure.

We didn’t bother seeking further comment from Alex Hawke… because he would probably have sought to clarify his tweet, and ruined an otherwise perfectly good beat-up.