The wealthiest 20 per cent of households in Australia hold around 70 times the wealth of the bottom 20 per cent, according to a new report by the Australian Council of Social Services (ACOSS).

In its overview of inequality in Australia, the peak body found that Australia had a higher level of income inequality than the OECD average, while wealth – which includes the money saved by a household as well as other assets and investments – was even more unequally distributed than income.

The report noted that strong employment growth over the past 17 years had helped limit income inequality, but had been countered by the fact wage growth occurred unevenly. The top 10 per cent of income earners saw wages increase by 72 per cent between 1985 and 2010, compared to a 14 per cent increase for the bottom 10 per cent.

“Consistent with trends in Australia, across the OECD incomes from paid work rose more at the top of the earnings ladder than at the bottom,” the report said.

“In three quarters of countries, household incomes of the top 10 per cent increased at a faster rate than the bottom 10 per cent, widening income inequality. Those with skills in highly remunerated demand areas – IT and finance – experienced significant wage increases (especially the top 1 per cent, with performance based pay and bonuses), while the wages of workers with skills in low paid industries did not keep up.”

In Australia, the doubling of investment income for the top 10 per cent between 2004 and 2010 was attributed as the major cause of this trend, which was also impacted by a move away from redistributive goverment tax policies.

The bottom 5 per cent of households now have an average income of just $116, while the top 5 per cent manage to rake in an average $5,047 per week.

The report also flagged concerns about the link between wealth inequality and declining rates of home ownership. 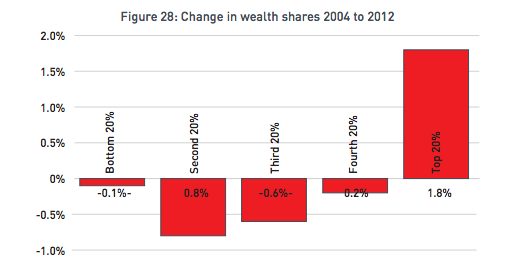 “High levels of home ownership have historically made the distribution of wealth more even and kept wealth inequality in check. However, many people, particularly amongst younger groups are finding it increasingly difficult to enter the housing market,” it said.

“Home ownership rates have declined since 1981, with the declines greatest amongst young people aged 25 to 34 years (from 60 per cent in 1981 to 48 per cent in 2011) and as such home ownership is likely to do less to reduce inequality in the future.”

While family home ownership has historically limited the growth of wealth inequality, the same cannot be said for investment properties.

The report noted that 80 per cent of investment housing is owned by those who fall within the top 20 per cent of the wealth distribution scale. With an increasing number of homes being snapped up by investors, this contributes to the concentration of wealth.

In a foreword to the report, ACOSS CEO Cassandra Goldie said wealth and income inequality was a threat to the global economy.

“While income inequality in Australia is above the OECD average, the good news is that Australia continues to do better than some of our overseas counterparts. This is in part because of the historical effectiveness of our institutions.

“Our tax system and our system of income support payments have been progressive and highly targeted, and our system of minimum wages had prevented the salaries of low income working households falling to the same extent as in the US.

"But as this report shows, despite more than two decades of unparalleled economic growth, our prosperity has not been evenly shared, with income and wealth becoming more concentrated in the hands of fewer people.”

Kasy Chambers, Executive Director at Anglicare, said the report was a wake-up call.

“The experience across the Anglicare network, working with almost 602,000 Australians, is that people, including children, do miss meals and go hungry.

"They lose contact with friends and relations. They become unwell. They become ashamed and embarrassed, and lose confidence and capacity. They live with stress and anxiety. And these have deleterious impacts on education, health and employment outcomes and people’s capacity to live full and engaged lives.”

All graphs via Inequality in Australia: A Nation Divided report.