The event raised hundreds of thousands of dollars for charity and allowed some hard-working politicians and staffers a rare chance to let their hair down and dance the night away. Jessica Mauboy provided the entertainment. New Matilda shared a glass of wine with Sarah Hanson-Young; Tanya Plibersek was tearing up the floor.

Bill Shorten was there too. The Opposition Leader looked relaxed as he talked to colleagues and staffers. If he feels any pressure, he gave no hint.

But make no mistake: Bill Shorten is indeed under pressure. Labor’s leader is facing serious allegations about his conduct as a union leader during his time at the Australian Workers Union. Perhaps more importantly, he is struggling to impress voters as their preferred prime minister.

The fact that Shorten is not preferred by voters to one of the most unpopular prime ministers in history is a testimony to the malaise that seems to have overtaken the public with respect to politics.

Labor is ahead in the polls and has been for most of the Abbott government’s first term. Tony Abbott leads a party room that still harbours deep reservations about his fitness for office. His time as Prime Minister has been marked by gaffes and bungles, some trivial, some so serious that his colleagues came within an ace of removing him.

The Abbott government’s problems are legion. This year’s budget has proved only a temporary elixir, with the government’s support dwindling back to its pre-May levels. It has an image problem: it is seen as nasty, punitive and out of touch.

Most of the cabinet is performing poorly. Those ministers who are pulling their weight, like Julie Bishop and Scott Morrison, only serve to highlight the mediocrity of time-servers like Peter Dutton, George Brandis and Kevin Andrews. Treasurer Joe Hockey is one of the government’s biggest problems, but internal factional tensions and leadership worries prevent Abbott from reshuffling him.

And yet, despite opposing an unpopular government led by an unpopular prime minister, Bill Shorten is unable to establish a clear ascendency against Tony Abbott. That must be deeply concerning for Labor supporters. Shorten’s approval ratings are running at negative 18 per cent. 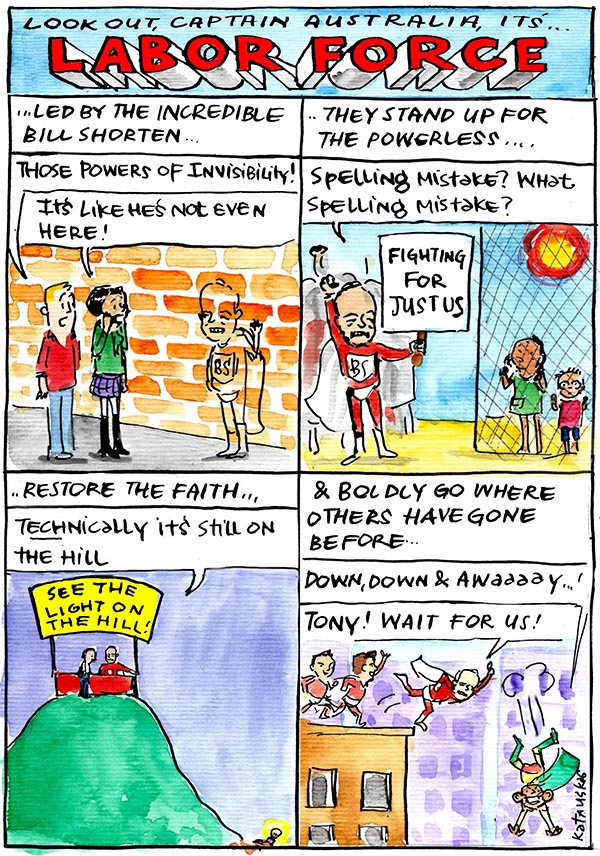 The AWU revelations certainly don’t help. Union scandals rarely bring down Labor politicians, but they can dog them for years, even if they are little more than baseless rumours. No evidence has ever emerged that Julia Gillard did anything illegal in her time as a solicitor at Slater and Gordon, for example, but the issue proved a serious distraction for her prime ministership.

The allegations about Shorten raised by Fairfax Media are potentially just as damaging. No-one is saying Shorten did anything illegal, of course. But the Fairfax reports suggest something troubling: that he sold out the union members he represented, in return for corporations paying fees to his union.

In their article yesterday, Fairfax’s Ben Schneiders, Royce Millar and Nick Toscano wrote that while Shorten was the AWU’s leader, big construction joint venture Thiess John Holland paid the union “nearly $300,000.” The money was paid in the mid-2000s when Shorten was both the state and national AWU secretary.

Fairfax argues that the deal that the AWU struck with Theiss John Holland was highly advantageous for the joint venture. While it delivered good pay, the conditions included fewer mandatory rostered days off and “additional available workdays each year.” At the time, the AWU argued the agreement was a good one, bringing “pay rates [that]start three per cent above industry Award and rise 14 per cent over three years.”

Does any of this matter? Shorten can and should argue that the deal was good for workers. On the other hand, it is far from good governance when a big employer pays a big union hundreds of thousands of dollars in opaque transactions.

Shorten will be called to give evidence about the matter at the Trades Union Royal Commission later this year. The government and a hostile media will continue to hound him on the issue until then.

Shorten’s problem is that he will now be drawn into a messy and protracted fight to defend his personal reputation. The consequences are unknowable, but at best the issue will be distracting. At worst, it could destroy Shorten’s political career.

Bill Shorten is a smart and savvy political operator. Contrary to media depictions of him as a hollow man with little interest in policy, he is, in person, warm, intelligent and articulate. In government, he showed a talent for policy development and public campaigning, notably on the disability insurance debate.

He also played a key role in Labor’s calamitous decision to remove Kevin Rudd, as the ABC’s gripping documentary The Killing Season reminds us.

As Opposition Leader, Shorten has not portrayed a lot of energy or dynamism. He has not advanced a comprehensive new policy agenda for the party. He has regularly struggled to take the fight to the Abbott government.

Labor’s desperation to avoid being wedged on national security and immigration encapsulates the problem: rather than oppose bad legislation and bad policy, the opposition has often rolled over. As a result, a series of bad bills have been made law, and the government remains as focused on scare-mongering over terrorism as ever.

At times, Labor has tried so hard not to get wedged on border security issues, it has ended up wedging itself. It happened this week, when Labor hinted that it would support boat turn-backs at next year’s election. If the goal is to avoid talking about asylum seekers, current tactics are failing dismally.

As Jason Wilson writes today in the Guardian, “a bolder strain of progressive politics might try changing the national conversation, and reconstituting it around hot button issues like intergenerational equity, climate change, and health and aged care.”

Wilson is surely right. Whatever you think about these particular issues – climate was hardly a winner for Labor in 2013 – the opposition needs to take control of the political narrative, or it will falter. The recent evidence from Britain is stark.

If Labor can’t find a way to shift the political discussion from immigration, national security and terrorism, the party will struggle to win next year’s election. Time is running out for Bill Shorten.