Sexual and other assaults against asylum seekers held in the Nauru detention camp have continued since a Department ordered review, with serious incidents taking place while the Department of Immigration sat on the report, as well as after its public release.

On top of this, the logs reveal four cases relating to sexual assault have also been recorded since the report – which found credible evidence of sexual assaults taking place in the centre – was completed.

The most alarming incident recorded since the review was completed relates to a Save the Children staff member who allegedly sexually assaulted a female asylum seeker on 12 March, 34 days after the Moss Review was completed, but eight days before it was released by the Department.

The Wilson records do not provide further information about the incident, which they say was managed by Save the Children.

While the government has accepted all the recommendations of the Moss Review, the Wilson records suggest that problems relating to assaults of asylum seekers by others held in the centre, as well as staff employed inside the camp, have continued.

The same day Moss completed his report, a fresh allegation relating to the assault of a minor in the detention centre was made.

And less than one week before the report was unveiled publicly, a local officer working in the camp was investigated for throwing a rock at a minor being held in detention. The employee subsequently had their job terminated, and a referral was made to police.

The Moss Review focuses heavily on the period covering October and November 2014, and the latest date of an incident referenced in the final report is 9 January 2015.

The final report is dated 6 February 2015, but the Department of Immigration did not release it publicly until 20 March.

In the period between those dates, New Matilda accessed leaked testimony from the Moss Review which revealed former Immigration Minister Scott Morrison had been “shit worried” about the situation on Nauru, according to a Deputy Secretary of the Department. 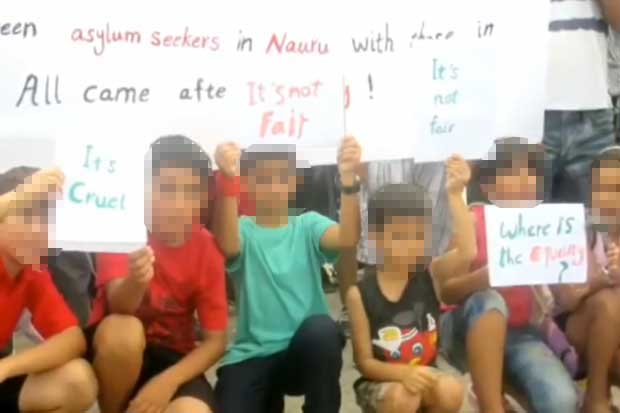 The Wilson records have come to light thanks to an ongoing Senate inquiry into the detention and processing centre at Nauru.

In responses provided to the inquiry, the company revealed that since 2012 it has recorded a “critical incident” in the centre once every 20 days.

The charts below, put together by New Matilda based on the incident logs in the document, show the full range of incidents of physical and sexual assaulted recorded the company since mid November 2013.

As some incidents are recorded in both the assault and sexual assault logs, there is some overlap between the two charts.

The data included in the answers provided to the Senate inquiry also reveals 3278 were made to Wilson by asylum seekers in the centre over a nearly 16 month period.

While the incident reports detailing serious allegations refer more regularly to local Nauruan employees than expatriates, the above data aligns with a complaint made to Philip Moss during his Review, and detailed in the leaked transcripts seen by New Matilda.

In interviews with Moss, asylum seekers made particular complaints about Australian and New Zealand guards, claiming they were often worse than locals. This is reflected in the complaints data, which records there have been almost double the number of complaints made about expatriate staff as locals, despite the fact Wilson’s data puts the number of local staff at 465, compared to just 358 fly-in-fly-out staff.

Further Wilson data shows 68 per cent of the fly-in-fly-out staff are Australian, with most of the rest holding New Zealand passports.

While the Senate inquiry has found devastating historical and contemporary evidence of sexual and physical assaults in the centre, it has also raised questions about the ability of Nauru’s justice system to respond.

A former magistrate expelled from the island has blasted the country as a “rogue state”, in which the judiciary, police, and press are not independent from government.

Those allegations have been echoed in a newly released submission to the inquiry, in which the country’s former Chief Justice the Hon Geoffrey Eames said Australia should be concerned the Nauruan government “is not committed to the Rule of Law”.

“If Australia is to take responsibility for the welfare of people transferred by the government to Nauru then the Nauru and Australian public must be assured that allegations of assault and other criminal conduct will be genuinely and thoroughly investigated,” Eames’ submission said.

“Where such thorough investigations might be seen by Nauru police to be unwelcome, so far as the Nauru government is concerned, it is unlikely that they will be undertaken.”

The astounding details in the Wilson’s documents came after senior staff took a number of questions on notice at a public hearing in May.

At the same hearing senior staff from Transfield Services, the major contractor for the Nauru detention facilities, frustrated Labor and Greens members of the inquiry by refusing to answer basic questions, taking a large number on notice.

Unlike Wilson, Transfield’s subsequent responses to those questions are yet to be published