NT Chief Minister Adam Giles has condemned “vigilante” and “racist attacks” after an Alice Springs-based ‘paramilitary’ force renewed its commitment to shoot people in the legs for anti-social behaviour.

But the NT Police has refused to state whether it will take any further action against the group, saying it will continue to monitor the activities of the Alice Springs Volunteer Force (AVF).

Spokesperson for the AVF, Gary Hall told New Matilda the group now numbered 14, but they were hoping to reach 20. He also says he has received a great deal of support from members of the community, although the AVF is seen as a fringe minority group.

The AVF was set up in July 2014 but gained notoriety earlier this year following a rise in reported rock throwing, vandalism and theft by Aboriginal youth, which sparked dozens of racist social media posts from Alice Springs residents.

It also provoked an extreme reaction from the NT government, with Chief Minister Adam Giles announcing that Aboriginal kids caught on the streets would come into contact with child protection. The Northern Territory has one of the highest rates of Aboriginal child removal in the country.

Earlier this year, the AVF advertised for members with military training and “past firearms experience” to join the group. SBS telvision’s The Feed program recently shadowed Mr Hall on his patrol, where he drove a designated route in army greens. 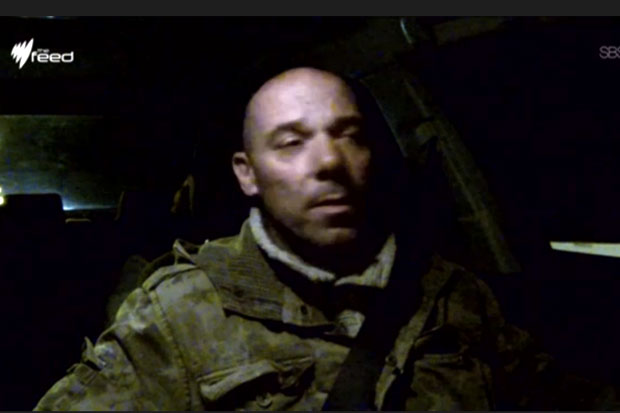 Mr Hall told New Matilda that people involved in anti-social behaviour will be given two warnings – one verbal and the other physical, before they take further action.

“I wouldn’t say there is ever going to be an altercation where someone pulls out a weapon anytime. It would be a sanctioned operation,” he told New Matilda.

“An example is if someone doesn’t heed previous warnings, you’ll be shot in the back of the leg. That’s the most effective one. If they don’t agree with the warning, that’s what’s going to happen and the operation will be carried out.

“The member of the public will be taken to a certain location and shot through the back of the legs.”

He claims the group’s actions are not based on race, and that it also targets non-Indigenous lawbreakers. He even told New Matilda the group is using Aboriginal methods.

“I can see only one effective method of summary justice in the NT and that seems to be the Indigenous method. I understand that the Aboriginal community have a method to dealing with people who their community deems deserves punishment,” Mr Hall said.

“One is to exile them from the town which corresponds with our thoughts as well… another method is for them to receive a beating which we agree with and then to have a spear through the back of the legs which we also agree with. We don’t have spears but we do believe it’s the only effective method to deter future crime.

“If you break into a house, you can expect broken fingers.”

But while he claims he is not targeting Aboriginal youth, Aboriginal people still are in their sights. Police say that crime has actually fallen in Alice Springs, but there has been an 18-percent rise in youth-related commercial property offences, according to SBS. It suggests Aboriginal youth may still be targeted.

“That sort of activity is not welcome in the Northern Territory. It is the police who will uphold the law and they will come down hard on anyone who breaks the law.”

But the NT Police told New Matilda that “the Alice Springs police continue to monitor” the group, and did not say if any further action would be taken.

Mr Giles said that his government was working with the Alice Springs Town Council and Central Australian Aboriginal Congress to address youth issues in the town, including the funding of Town Council rangers to expand patrols.

But there was no further comment on the activities of the AVF and Mr Hall.