The Greens are calling for an inquiry into VicForests after leaked documents confirmed aspects of the government logging corporation, which is looking to the Renewable Energy Target to boost returns, are unprofitable.

“It’s time VicForests had full public scrutiny,” Victorian Greens Forestry Spokesperson Samantha Dunn said after it emerged yesterday that the native forest harvesters’ East Gippsland operations had recorded annual losses of more than $5 million and have not been profitable for many years.

VicForests’ Three Year Business and Corporate Plans, which were leaked by sources within the corporation to Professor David Lindenmayer, also show the company is keen to start burning native wood waste for electricity to receive subsidies under the Renewable Energy Target.

“There are a whole raft of sawlog classes for which there is no market, and so clearly the only option is to move into biomass burning: so this is high volume, low value,” Lindemayer said.

The leaked documents emerged just one day after the Federal Environment Minister Greg Hunt introduced a bill that would see the national Renewable Energy Target reduced by roughly 20 per cent and modified to include the burning of native wood waste as a source of renewable energy.

Including wood waste under the RET is a move that environmentalists say could lead to ‘massive forest furnaces’ being used to prop up the unprofitable native forestry industry, and one which Labor and the Greens oppose.

Labor declassified native forest wood waste as a renewable energy source in 2011 and last night moved an amendment in the House of Representatives to rule out native wood waste, but it appears the bill’s success will ultimately depend on the positions taken by the crossbench in the Senate.

Responding to the allegations around the RET, VicForests’ Planning Manager Nathan Trushell moved to quell forest furnace fears, telling Radio National that he “simply can’t see” how the economics of large-scale use of native wood waste for electricity would stack up.

“The reality is timber is heavy and expensive to transport and if we were looking at our opportunities in East Gippsland we’re talking about several hundred kilometres to transport that material,” Trushell said.

“That’s not our business model, it’s certainly not our instructions from government, but any fears of massive forest furnaces that we want to build or construct, or seek people to construct, is simply a nonsense.”

Lindenmayer, the Greens and a diverse array of environmental groups remain unconvinced. Even if things operate as set out by the government’s new RET bill, The Australia Institute said earlier this month, “biomass might account for around 15 per cent of the [reduced]target”.

“So this is dumb and dumber on steroids, I’m afraid.”

A spokesperson for the Victorian Greens went further, arguing that “a range of government reports, academic commentary and careful research also confirms that VicForests’ business [more generally]does not stack up”

“As VicForests' work practices and environmental compliance deteriorates, the organisation is trying to make up new reasons to keep logging in high conservation value native forests.” 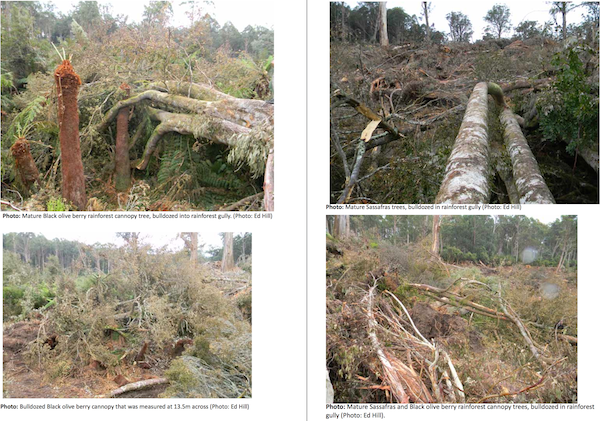 VicForests had already been under fire for potentially illegal logging of protected rainforest, described by the state Environment Minister as “very disturbing” and “extremely poor practice”.

In an apparent contradiction, though, the state government is now pursuing an investigation against the environment group that exposed those practices because members accessed the site without seeking permission from VicForests.

The minister whose department is overseeing the investigation, which has been running for at least a month and could land the environmentalists in the courts, recently said the investigation was “entirely appropriate”.

“There have been many, many complaints about VicForests over the years and breaches over the years, but very, very few prosecutions in all of that,” Dunn said.

“We’ve got a report from the Environment Department that is pretty damning of VicForests, and talks about them having ‘partial culpability’ in all of that,” she said.

“You’ve got a group of community members who are really doing the work for VicForests, and now the gall of facing a prosecution for that: It’s a pretty outrageous move.”

In light of the allegedly slipping practices and revelations that VicForests’ operations are in parts unprofitable, Dunn is pushing for a full transition to plantation timber as well as “a full public inquiry into VicForests”.

"Victorians need to know that the number of jobs in native forest logging is minimal, compared with plantation jobs,” she said.