Controversial changes to a remote jobs program, condemned for forcing Aboriginal workers back to the days before equal wages, could also push people off their homelands and into regional centres, where they could very likely fall even further into a poverty trap.

That’s the concern of the Central Desert Regional Council, a shire which takes in communities like Yuendemu, Ti Tree and Lajumanu, all within a day’s drive to regional centres like Alice Springs and Katherine.

The Abbott government recently unveiled stricter provisions to the Remote Jobs and Communities Program (RJCP), which was rolled out by Labor following the destruction of the Aboriginal-devised Community Development Employment Projects (CDEP).

Rather than working 16 hours a week for Newstart wages, RJCP participants would instead be required to work 25 hours, five days a week, over 52 weeks in order to receive welfare payments.

Those in regional areas and cities will only be required to work for 26 hours a week for six months under the Job Active program.

The toughening of RJCP has led to criticism the federal government is condemning Aboriginal workers to the days before equal wages, with remote area participants receiving under award wages of less than $10 an hour.

In the Northern Territory, Aboriginal workers will be working for less than $5 an hour due to the controversial income management scheme which quarantines half of a person’s welfare payment.

But the changes will not only have consequences for remote areas, according to the Central Desert Regional Council, an RJCP provider, which says there is the potential for remote workers to move into regional centres to escape the tough requirements of RJCP.

Council President Adrian Dixon likens it to the beginning of the NT intervention, when Aboriginal people left prescribed communities to escape the “racist” legislation. 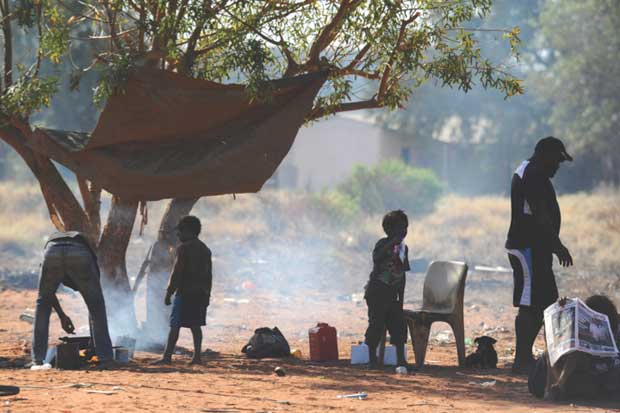 “People will move town to avoid the unfair rules and harsher penalties,” he said.

John Gaynor, who is Director of Community Services for the council, said most remote workers in the council’s area had not been informed of the stricter provisions.

“Our council was gobsmacked,” he told New Matilda.

“During the intervention, a lot of people left communities because they were frightened. They left and moved into towns and there were lots of reasons for that, but it has taken a long time for people to move back to communities.

“The sustainability of communities relies upon people living in community. It relies upon sustainable populations and the councillors are saying they don’t want to see people moving back to the towns.”

Mr Gaynor says government logic, that people in regional towns can be moved onto real jobs after 26 weeks, compared to remote areas where there are limited employment opportunities, would be lost in translation.

“Our councillors are saying people in remote areas won’t differentiate. They’ll see they live in a remote community and they’ll have to do 52 weeks, all year round, but if they move into town they won’t have to do that. They’ll see that as limiting their risk of breaking the rules.

“People don’t want to break the rules. They want to work within the rules but they’ll see this as minimising that risk.”

Mr Gaynor told New Matilda that even if people move to towns, like Alice Springs, and are placed on Job Active where they only have to work for 26 weeks as a requirement, they will still struggle.

“They’ll find it very difficult to secure employment. And the reality is they might get caught in a poverty trap by moving in and finding they’re actually breaking the rules anyway by not complying with their job seeker obligations.

“On face value it would appear there is inequity in the requirements of people living in remote communities.”

Mr Dixon also said that there would be consequences for larger towns like Alice Springs.

“During the intervention, people left their communities in droves to escape what they saw as unfair and racist rules,” he said.

“It resulted in overcrowded public housing, increased alcohol abuse and increased violence, crime and anti-social behaviour. This just put more pressure on police, on housing and more demand on the hospitals.”