In a widely shared article in the Australian Jewish News, Di Natale was reported as saying that Palestinian Authority President Mahmoud Abbas must acknowledge Israel’s right to exist as a Jewish state.

Despite running under the title “Di Natale in his own words”, the Senator’s office today told New Matilda that the article’s opening line was not an accurate reflection of the Senator’s views.

“He had no intention for his comments to be interpreted as support for establishment of a “Jewish state”. It’s not a phrase that he used,” a spokesperson said.

According to his office, Di Natale simply agreed to a question put to him by journalist Gareth Narunsky, apparently missing the distinction being made.

UPDATE: The Australian Jewish News has released part of the audio from the interview. Listen here:

The difference might seem small, but it’s a charged issue in the debate over the future of the region, and one that angered Greens members. 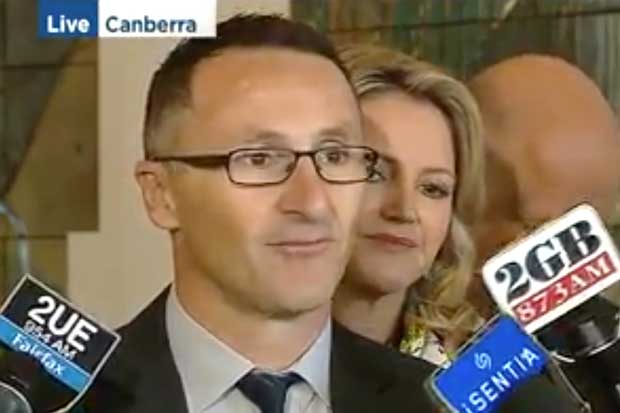 Israeli PM Benjamin Netanyahu has been accused of using the demand to intentionally derail the peace process, knowing the concession is not acceptable to the Palestinian Authority.

Critics of the push to frame Israel as a Jewish state warn rhetoric or legal reform based on the principle would further alienate non-Jewish Israelis, who make up around 25 per cent of the country’s population.

“A state that sees itself as “a Jewish State” is inherently an exclusive state, because a person cannot become Palestinian-Jewish or Muslim-Jewish,” Israeli writer Noam Shizaf noted in 2013.

After the publication of the Australian Jewish News’ story, Di Natale’s office received a significant number of inquiries from concerned Greens members, dismayed the party’s new Parliamentary head had apparently taken such an ardently pro-Israel position.

Di Natale’s office responded to the inquiries by saying the Senator supported a peaceful two-state solution.

“The establishment of a ‘Jewish state’ (as opposed to an ‘Israeli state’) is not conducive to this outcome, and Senator Di Natale did not intend for his comments to be construed as such, and this is not Australian Greens policy,” Di Natale’s Executive Assistant Tom Bennett said.

In response to the growing confusion, the Australian Jewish News stood by its reporter, posting this status on its Facebook page.

Did we get it wrong?No way!There has been a bit of traffic on the interwebs lately over the Greens response to our…

Posted by The Australian Jewish News on Wednesday, 27 May 2015

Di Natale’s office took up the outlet’s offer this afternoon and forwarded a clarification to the paper.

“Wasn't an error in reporting after all. It was just a misunderstanding – and not ours. For those of you whose social justice voting tendencies were stroked just a bit, no dice – we're afraid the Greens aren't quite kosher yet,” the AJN said in a subsequent Facebook post.

The clarification is likely to go some way to calming the nerves of Greens members critical of Israel, although the ‘Jewish state’ angle wasn’t the only one to put some offside.

In the interview Di Natale reaffirmed that the Greens do not support the Boycott, Divestments and Sanctions campaign, and praised Israel’s advances in water-saving technology.

The latter comment raised eyebrows, with inequitable water distribution being another key issue in relation to Israel’s occupation of the West Bank.

“Senator Di Natale and the Australian Greens reiterate our concern regarding Israel’s illegal settlement activities in occupied territories, and the impacts this has on Palestinian people and their access to water,” a spokesperson said.

The Australian Jewish News has been contacted for comment.