Members of the Australian Rohingya community have rejected Tony Abbott’s accusation that others fleeing Burma are refusing to go through ‘the front door’, pointing out the ethnic minority are effectively refugees in their own country, and denied basic rights and documentation by the Burmese government.

The Prime Minister last week ruled out offering assistance to the thousands of Rohingya who have been trapped at sea in recent weeks, as bordering states refused to allow their vessels to land.

“I’m sorry. If you want to start a new life, you come through the front door, not through the back door,” the PM told reporters.

Answar Sha, the President of ‘Burmese Rohingya Community in Australia’, told New Matilda those still in Burma had only two options: live without hope or find passage out of the country.

“They don’t have anywhere they can go through the front door,” Sha said.

The Rohingya are a Muslim minority concentrated in Burma’s western Rakhine state where, according to the United Nations, 800,000 people live without citizenship. 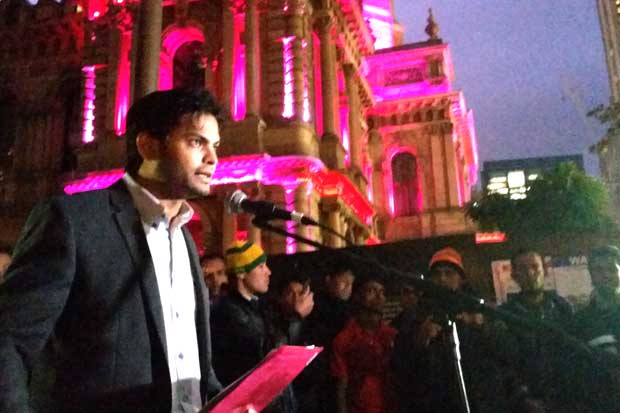 In 2012, Muslim towns were terrorised and torched as police looked on. Tens of thousands were displaced in what Human Rights Watch described as “a campaign of ethnic cleansing against the Rohingya”.

Rohingya are viewed with suspicion in the country because of their deviation from Burma’s deeply observed Buddhist traditions, and are often portrayed as migrants, despite their long connection to the country.

On Friday, members of Australia’s Rohingya community convened to call on the government to intervene and assist others escaping persecution.

On a cool Sydney evening, Salemul Kalam repeated a word used by many in the community to describe what is happening in their home country.

“We are being oppressed in Burma, we are facing genocide,” he said.

“And we have not much coverage from the media or support from the international community – and now they are pushing back the boats.”

While Opposition Leader Bill Shorten has criticised the Prime Minister for ‘dumbing down the issue’, he stopped short of rejecting boat turn-backs.

Speaking at the Friday protest NSW Greens MP Mehreen Faruqi said she was ashamed a rich country like Australia was not doing more to help. “The Australian people I know are compassionate, open hearted, and caring, and this government does not represent us at all,” Faruqi said. “Tony Abbott, we are proudly gathered here today to tell you to have the courage to offer sanctuary and to offer hope to others, to take immediate action and provide asylum to the Rohingya.”

Kalam said targeting people smugglers would not be successful unless the root problem was addressed.

“The people who are in the sea have to be rescued and if a government says they want to restrict and punish those who are doing human traffic, I would request do it but please, [the]most important [thing]is to stop the oppressor,” he said.

“They must fight both.”

Sha said Australia should play a leading role along with Asian nations and the UN in pressuring the Burmese government to restore civil rights to the Rohingya.

“People will keep fleeing. I know now Australia thinks they are away from the problem, but people will continue to come,” he said.

“You can stop them reaching here, but people will still be dying on the sea.”