Under questioning from the Greens Environment spokesperson Larissa Waters, Mathias Cormann said he hopes coal has a long future, and that the $5 billion concessional loans scheme may be used to that end.

“I believe that coal is good,” Cormann twice repeated.

“It is a very important industry for us. It is an industry I would like to see continue to see grow and prosper.”

While there’s no guarantee the facility will be used to fund Galilee coal projects, or associated port, rail or airstrip infrastructure, the government “won’t rule it out”.

“Of course we’ll go through a proper orderly and methodical process to ensure that the investment is directed into sound, very strong, infrastructure,” Cormann said.

He said the soft loan scheme “will be available to help us leverage private sector investment in the important productivity enhancing, job creating infrastructure of tomorrow”.

In considering whether Galilee coal projects, which would collectively produce more emissions than entire nations like the UK, Italy and South Africa, the government will need to consider a recent court case which revealed the job creation claims used to justify the projects may be hugely overblown. 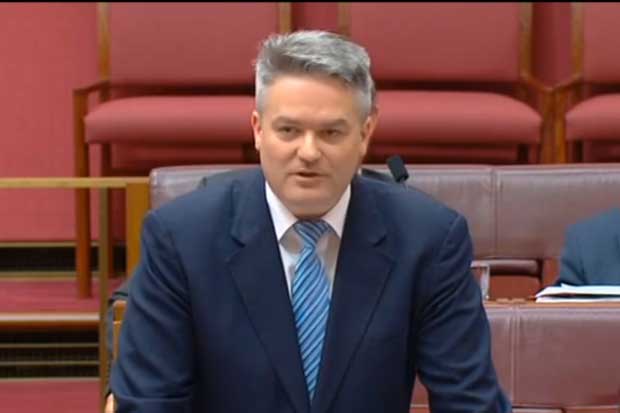 The biggest mine proposed for the Galilee, Adani’s Carmichael mine, had been promoted largely on a claim it would create 10,000 jobs. Testimony from Adani’s own expert witness, however, put that figure at a considerably smaller 1,464 jobs.

That’s net jobs, direct and indirect, although it does not take into account jobs that may be created by Adani’s proposal to build the largest coal port in the world, adjacent to the Great Barrier Reef.

In the course of the five-week case it also emerged that while Adani had claimed its combined rail, port and mine projects would contribute $22 billion in taxes and royalties, the real figure could be as low as $16.8 billion.

Adani had been offered a similar loan by the former LNP government of Queensland, but the offer for potentially hundreds of millions of dollars in subsidies was revoked by the incoming Labor government.

When Labor took office Adani issued a public statement arguing it had never needed the assistance, which prompted some, like the Australia Institute’s Richard Denniss, to question why it had been offered in the first place.

Further doubt is thrown on the claim by the company’s creeping deadlines for first production which has been extended multiple times, as Adani struggles to attract finance for its mine, which would be the largest in Australian history.

The company’s endeavours to reach financial close have not been helped by an exodus of major international banks, which have ruled out supporting the mine on environmental grounds.

At least 11 international banks, 10 of which are in the top 20 lenders to Australian coal ventures, have ruled out financing the Galilee projects in the face of staunch campaigning from environmental groups.

Conservationists have also mobilised a divestment campaign targeting Australia’s ‘big four’, which are yet to show their hand on whether they’ll provide funds.

As the pool of potential lenders continues to dry up, and customers apply pressure by closing their accounts to protest Australian banks’ inaction, experts are questioning whether the projects are even financially viable.

Last week, global financial analyst Tim Buckley testified in Queensland’s Land Court that Adani’s mine is unlikely to ever turn a profit, raising the spectre of whether the Indian company will pay any tax in Australia.

The Greens have suggested that the federal government’s decision to extend subsidies to the Galilee projects effectively replaces the former Newman government’s offer to subsidise the 300-kilometre rail line needed to transport coal to market, and questioned the government’s commitment to climate action.

When asked yesterday why the government would create “yet another slush fund for the coal industry” in its dying days, Cormann responded by saying that the Liberal party “don’t admit that the age of coal is over, because it isn’t”.