There’s an Australian Customs & Border Protection advertisement doing the rounds on social media. It looks like this: 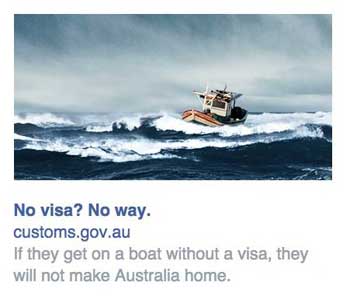 For me, this was a familiar image, popping up seemingly at random across Facebook. I’d always assumed it was a general campaign — a reminder to all Australians of the government’s stance on asylum seekers. How wrong I was.

A friend, tired of the advertisement, had made use of Facebook’s “Why am I seeing this ad?” feature. The reasoning?

I soon realised that to a vast majority of white acquaintances and friends, the advertisement wasn’t so familiar. In fact, every white Australian out of roughly sixty people I asked had never seen it before at all.

To my incredulity, every individual with only English listed in their profiles – even those with additional European languages such as French – had never been shown the advertisement. Of those I asked, people of colour with Urdu, Bengali, Arabic, Dari, Vietnamese and Tamil listed as known or native languages in their profiles had seen it repeatedly.

Facebook allows advertisers to choose from a myriad of demographical factors to reach a specific audience, including age range, location (down to country, state or province, even postcode), interests, hobbies, ‘liked’ pages, relationship status, workplace, education, gender, purchasing behaviour, device usage and more, with the option of overlaying multiple categories at once.

This is, in most cases, both extremely costly and effective. The efficacy for this particular advertisement, however, is questionable.

For one, its reach extends to Australian residents and citizens; although Urdu is my mother tongue, I was born and raised in Perth. This endemic inability to distinguish between non-white people on a global scale, erasing the multiplicities of nationalities, ethnicities and identities that exist among us, is reflective of how hyphenated Australian identities are so frequently undermined and the validity of our nationalities questioned.

And this is the least racist aspect of it all.

The advertisement itself is shockingly crude, assertive and definitively confronting; everything about it reeks of an “ant, meet boot” mentality that startled the world upon release — exactly the response the government was after. How best to deal with fear but by displacing it, so as to incite fear in others? What better method is there of coping with collective insecurity than by telling the rest of the world that we aren’t scared, that we’re the nation others should be scared of?

Perhaps we went one toke over the line. To consolidate the “No Way” campaign, Australian Customs & Border Protection launched a comic — you might remember it — and more recently, a $4.1 million anti-asylum seeker telemovie. Great! The levels of cruelty and heartlessness present in Australian propaganda are finally on-par with our policies.

Clicking on the Facebook advertisement for the first time took me to this page of the Australian Customs & Border Protection website. I was stunned by two banner advertisements: the first, a line of six well-dressed Asian men, the two with darkest skin on each edge, gradiating inward to the lightest-skinned in the middle.

Along the bottom of the image sits the type logo of “NO WAY — YOU WILL NOT MAKE AUSTRALIA HOME”, followed by “IT’S OUR RESPONSIBILITY”. As though this wasn’t genuinely disconcerting enough, the next image was of an East Asian man looking upward with the text “Thinking of home?” set over it; it linked to Customs’ Voluntary Returns page. 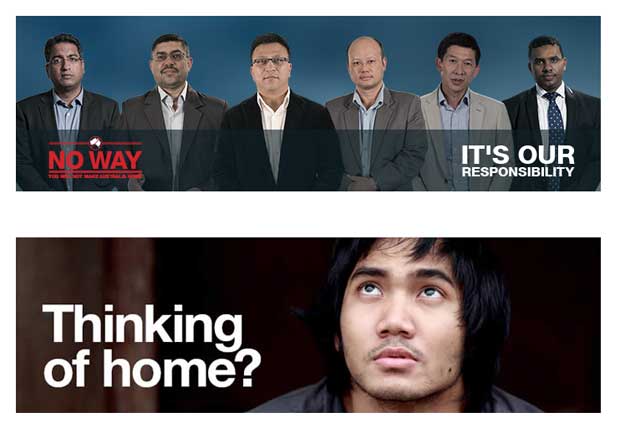 Sarcastic, sadistic and nauseating — I guess we should expect nothing more from a government that allows asylum seekers to be tortured, dismissing reports on their own life-threatening misconduct as mere “lectures from the United Nations”.

The main feature that the original advertisement took me to was a list of languages in which the campaign is seeking to engage people, preceded by the header “Counter People Smuggling Communication”. Sure enough, the list consists of Albanian, Arabic, Indonesian, Bengali, Dari, Farsi, Hindi, Kurdish, Nepalese, Pashtu, Rohingya, Sinhala, Somali, Sudanese Arabic, Tamil, Urdu and Vietnamese.

Technically, this makes a bit of sense. Rohingya and Tamil are the languages of two of the most prevalent ethnic groups currently seeking asylum in Australia from truly oppressive, violent, sectarian conflict. Other languages, less so.

There have not been groups of Albanian asylum seekers coming to Australia for a decade and a half, nor recent significant arrivals of Vietnamese, Indonesian, Nepalese or Bengali refugees. Lumping these groups together despite no common migrational denominator hints, once again, at indiscriminate homogenisation, and anti-Asian sentiment echoing the 20th century.

For Urdu and Dari speakers, the “No Way” campaign isn’t just spreading word through social media. There are billboards featuring that same image of a lone boat in rough waters present in Lahore and Karachi airports in Pakistan, and Perth, Australia. Again, this costly advertising is questionable — what strategy is there behind an anti-asylum seeker boat advertisement in an airport, other than vile fear-mongering, belittlement, and a statement of sanctimony? Deterrence, as a policy, does not work. Using human beings as political pawns to send a message does not work. Why? Because the xenophobia of our country does not weigh stronger or heavier than the urgency and necessity with which asylum seekers need to flee their own.

A lack of safe and accessible migration channels in Western nations, implicit biases in claims assessment, and insufficient camps continually force asylum seekers onto boats as a desperate option.

“Stopping the boats to save lives at sea” is akin to saying, simply, “die elsewhere, and suffer quietly”.

The construction of asylum seekers as deictic entities — their dehumanisation and politicisation — is integral to continuing their plight. The dehumanisation, degradation and demeaning of those who arrive on Australian shores by boat to seek refuge is perpetuated by politicians and mass media, insidiously becoming part of a national mindset.

It is far easier to violate the people who don’t look like you — people who are not subject to your compassion; early last year, Shourov Bhattacharya posed an important rhetorical question: what if “boat people” were white?

“Imagine white men and women sewing up their lips. Blonde teenagers searching for sheets and rope. Pretty blue-eyed kids staring out from behind wire fences. Lots of would-be Australians who look like most other lucky-to-be-born-here Australians.”

How did Australia respond when it was, for all intents and purposes, white people seeking asylum? With the same barbarism? Nope — we opened up the borders in the 50s and 60s to accommodate masses of Eastern European refugees. The vivid humanity of people who look like “us” — the majority, white society — is undeniable. For a non-European, non-Western “other”, however, subpar treatment is deemed acceptable.

It is a well-known fact that Australia is a signatory to the United Nations refugee convention; our own migration act states that seeking asylum here is legal, including when done so by boat.

What, then, really defines an “illegal immigrant”? It is generally accepted that someone who overstays their visa is considered to be staying in the country illegally, often for years unnoticed. Toward the end of 2011, there were 58,000 of these people in Australia. They were predominantly from the United States and Britain.

Most of white Australia finds it unsettlingly difficult to look at US or British migrants and visa-overstayers as “illegal”; beyond legislative definitions, there are sociocultural ones.

Australia, a nation built on the ongoing genocide of its Indigenous people, the instillment of white supremacy, and no prime ministers of colour to date, routinely attributes power to whiteness.

In 2015, we are governed by a prime minister born in the United Kingdom, who yet questions the authenticity of immigrant citizens (noted: only black, brown and Muslim ones). In 2015, we are complicit in the neglect of vulnerable people, cruelly cast aside by policies dripping of blood and xenophobia in equal measure. In 2015, we are only 42 years past the White Australia policy, and it truly shows.

Where power is built upon homogeneity, diversity is always to be punished — and a diverse Australia is unwanted to the point of protest. True equality and pluralism would be received as shaking the foundations of hegemonic whiteness; when this structure is threatened, the fear is displaced and projected.

Even more useful to the Australian government’s campaign is the fact that fear keeps masses clinging to nationalism, patriotism, conservatism, and rigid leadership.

The crux of Australian anti-asylum seeker sentiment is fear. And of course, if there’s anything that stirs fear in a Western nation, it’s the same Islamophobic sensationalism that’s rife in this country. A decade on from the Cronulla riots, how much has changed in dominant Australian attitudes towards Muslim people? Arguably, nothing.

Consider the languages targeted by the recent Customs Facebook advertising, at a cumulative cost of $12 million. Urdu and Pashtu are languages of Pakistan — a Muslim-majority country, much like Bangladesh (Bengali), Indonesia (Indonesian), and — well, I’m sure you can spot the trend. Arabic, Somali, Sudanese Arabic, Dari, Farsi… Additionally, the Rohingya people are Burmese Muslims.

If you need further confirmation, take the only eastern European language on this list — Albanian. There have been no sea arrivals of Albanian asylum seeker groups in Australia recently, so why the advertising? Unsurprisingly, Albania is a Muslim-majority country.

Undoubtedly, there are plenty of asylum seekers arriving on our shores who aren’t Muslim. The racialisation of Islam contributes to the perception of brown people as a monolith — foreign, incompatible with the purported “Australian way of life”, and to be blindly feared or hated.

Race and religion are integral to Australia’s hardline anti-asylum seeker approach — a fact cemented by the underlying strategies of Customs campaigning.