The Coalition has rejected the majority of recommendations made in a mammoth Senate inquiry into affordable housing, issuing a dissenting report amid accusations the government’s activity in the area has focused on cutting back programs rather than coming up with solutions.

After running for 18 months and receiving 231 submissions, the inquiry by the Senate Standing Committee on Economics delivered a majority report that proposed 40 recommendations to the government, as high rental prices continue to put extreme pressure on renters around the country, especially those at the bottom end of the market.

“I think the big takeaway is that through all the submissions there was a call for leadership from the Federal Government when it comes to the question of housing affordability and, frankly, housing more generally,” she said.

“This government is not engaged in not only the practical service delivery but also the conversation about affordability, about availability, about access to housing, and what we need to do in the future. Since this government came to power all they’ve done frankly is to stop things happening rather than to engage with the community.”

On top of ending funding for peak housing bodies in December last year, the Coalition has also cancelled the next round of funding for the Labor initiated National Rental Affordability Scheme, cut the capital component of the National Partnership Agreement on Homelessness, and scrapped various housing consultation councils.

The dissenting report issued by Coalition Senators acknowledged a problem with housing affordability but rejected 80 per cent of the majority report’s recommendations.

“In the view of Coalition Senators, many of the report's recommendations do not constitute the best responses to the housing affordability challenges Australia faces, and if implemented, would be unlikely to address many of the underlying problems identified in the report,” it said. 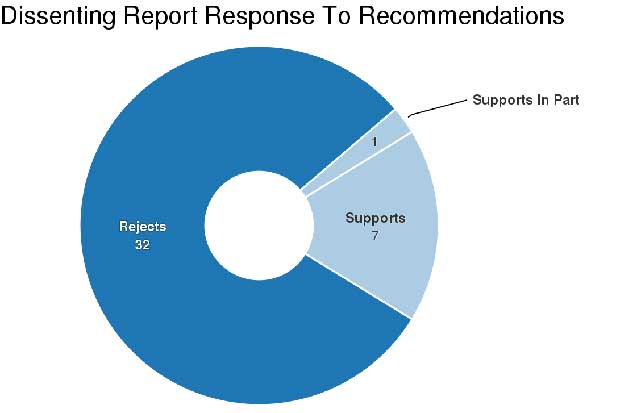 As the graph below shows, a large number were rejected on the basis of the Coalition’s commitment to cutting red tape. Despite reaffirming the Commonwealth’s commitment to the policy area, the report rejected a number of recommendations on the basis they were matters for state and territory governments. 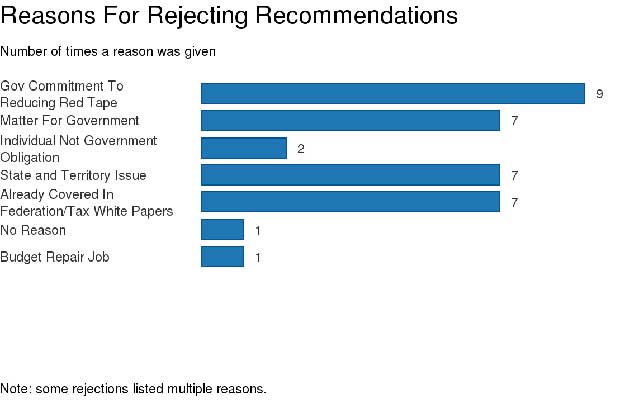 Among the ideas rejected by the Coalition was a recommendation to appoint a Minister for Housing and Homelessness within a senior government portfolio, and another proposing the Treasury prepare a study of the impact of negative gearing and capital gains tax on housing affordability.

“This would only help Labor’s efforts to make political mileage on an issue which the Government is already hard at work on.”

Recommendations relating to the use of government-held land and committing adequate funding for women and children escaping domestic violence were supported.

McLucas said she was disappointed the Coalition had rebuffed efforts to put together a joint report given the need for long-term, bipartisan policy in the area of housing.

“I offered in good faith to try and find a shared view. There were some bits on the edge we probably couldn’t agree on, but I hoped we would be able to agree on the main substance of the report,” she said.

Edwards, who served as the Committee’s Deputy Chair, said he had also approached all of its business in good faith.

“But ‘in good-faith’ doesn’t mean the suspension of due diligence and proper scrutiny against which measures the government was able to support eight of the Committee recommendations,” he said.

The conclusion of the senate inquiry comes in the wake an Anglicare survey highlighting the stark undersupply of affordable housing and a heavy impact on low income Australians in particular.

The annual rental affordability snapshot found there was just one property in the nation’s capitals classified as affordable for a single person on Newstart.

"Tony Abbott, Joe Hockey and their colleagues need to actually read this report and then immediately moving to address this crisis. An essential start will be reversing the half billion dollars in cuts that were made in last year's budget," Ludlam said in a statement.

Questions about the Coalition’s commitment to housing affordability and homelessness have been continually raised by community and peak organisations working in the area since the government came to power.

After much delay, Social Services Minister Scott Morrison recently recommitted the government to fund the National Partnership Agreement on Homelessness.

Those in the sector are now nervously awaiting the Reform of Federation White Paper, which is expected to outline options for the government going forward.

McLucas said other government papers in the area, for instance the Commission of Audit, had been “very ideological” and “lined up quite strongly with the current government’s view”.

“If we look at what happened with the Commission of Audit, and you look at the issues paper on housing as part of the Federation White Paper, they don’t read as independent, rational, dispassionate assessments of where we are at the moment,” she said.

Edwards said the White Paper would review the Committee's findings in “good faith”.

“We are committed to reducing the regulatory burden for individuals, businesses and community organisations against their stated goal of improved housing affordability,” he said.