The National Union of Workers has renewed calls for the introduction of a licensing system for labour hire contractors after Four Corners broadcast distressing scenes of migrant worker abuse earlier this week.

Most of the exploitation, as New Matilda reported, is experienced by migrant workers on working holiday, or 417, visas.

The labour hire contractors the ABC exposed mostly service farms and factories that supply major supermarkets and fast food chains. Underpaid, often unpaid, verbally abused, and sometimes sexually assaulted, the workers they exploit are gagged by intimidation, remoteness of the farms and factories, and poor English.

NUW National Secretary Tim Kennedy told New Matilda told a key problem is that there is no licensing system to regulate the labour hire contractors. They act as middlemen in the fresh food supply chain, skimming big money off exploited workers’ entitlements. Producers pay the minimum wage, but workers don’t receive all of it.

“We do need government to come in and license labour hire in this country,” Kennedy said.

“You don’t even need an ABN; what you need is to control a group of workers. You just need to be able to physically drop them off at the plant and make certain that they exit the plant.

“There’s nothing to stop them at the moment, there is no sanction whatsoever.” Despite recently voting against a Senate inquiry into working visas established by the Greens, with Labor and crossbench support, the federal government expressed concern in the wake of Four Corners’ broadcast.

Its response to the program, though, pointed back towards the work already being done.

“Both the Department of Immigration and Border Protection and the Fair Work Ombudsman are active in ongoing compliance campaigns to ensure that 417 visa holders are being paid in accordance with Australian pay and conditions,” Liberal Senator Michaelia Cash said.

As the Assistant Minister for Immigration, Cash outlined some of that work: The ombudsman has dealt with over 6,000 requests for assistance from visa holders and provided advice and assistance to over 5,000 foreign workers and visa-holders.

More than $4 million in outstanding wages and entitlements has been recovered by a special “Overseas Workers’ Team”.

Yet the exploitation continues.

One worker on the Four Corners program was being paid just $3.75 an hour, others worked 18 hour days and weren’t allowed to go to the bathroom, many had been ripped off to the tune of tens of thousands of dollars.

Despite the significant work the government is doing, Joanna Howe, an academic with Adelaide University specialising in temporary work visas, remains unimpressed.

“Rather disingenuously, the Government has voiced its concern for the plight of these migrant workers but failed to acknowledge that this is a systemic problem requiring a strong and new regulatory response,” she wrote in a piece for ABC Drum.

“The only new reform announced by the Government is an initiative to prevent employers from coercing working holiday makers into voluntary work so that they can renew their visa.”

Howe advocates an overhaul of the visa system – something the Senate Inquiry is addressing. Kennedy, from the NUW, also argues for drastic action.

“The problem we have with our industrial laws today is simply that they do not conceptualise this new model of employment,” he said.

“The Fair Work system thinks of workers as a direct employee and the reality is there’s a big gap. The new model of employment being used in these areas is they’re not employees; these are contractors, these are cash-in-hand workers. These don’t have any of the protections of the Fair Work Act.

“They fall not through the cracks, they fall through a great big hole.”

With so little regulation of labour hire contractors “they’re here today, gone tomorrow – who do you enforce it against?” 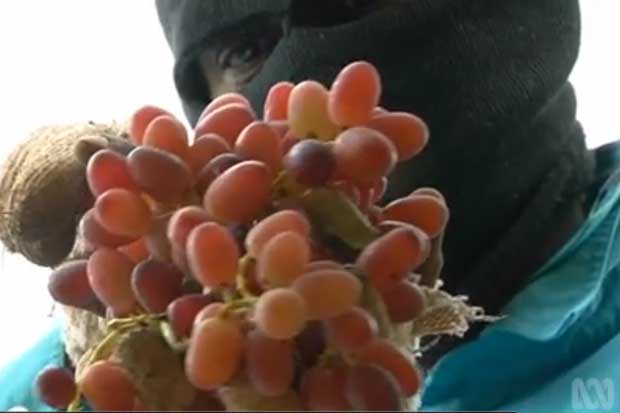 Ultimately though, Kennedy argues, the buck stops with the big supermarkets and fast food chains that retail the product and use their buying power to pressure producers into accepting lax labour hire standards.

“[A licensing system] means you have a mechanism that makes it easier for the big retailers to do the right things, so what we’re trying to do is use a bit of carrot and stick,” Kennedy said.

“If there’s a licensing regime in order for you to come in and supply labour, you’ve got to meet certain requirements about capitalisation, about training, about transparency.”

Kennedy’s strategy is to pressure big brands into something more binding than the ineffective ‘ethical sourcing’ policies that shield them now, and a licensing regime is a big part of that.

“Unless these brands sign on to an agreement that the retailers and the unions have set up so there’s minimum standards met, then you shouldn’t be able to supply labour anywhere,” Kennedy said.