Alice Springs residents who have “firearms experience” and are “willing to teach others” are being encouraged to join a vigilante-style ‘paramilitary’ force in yet another violent threat to Aboriginal youth accused of rock throwing, property damage and vandalism in the troubled Central Australian town.

Gary Hall, a spokesperson for the Alice Springs Volunteer Force, yesterday sent a post to the “Alice Springs Community Open Forum” a closed Facebook group, with the aim to recruit volunteers.

The group was set up last year and has previously warned those “who break into houses or steal cars will be severely dealt with” by the self-described “paramilitary force”.

Hall, an Irishman who has lived in Alice Springs for about four years, aims to model the group around the Ulster Volunteer Force (UVF) in Northern Ireland, responsible for an estimated 500 deaths and classified as a terrorist organisation in Britain, Ireland and the US.

Hall is also involved with the Concerned Residents Council (CRC) who have been volunteering to join unsupervised controls of “hot spots” around Alice Springs, where there have been reports of rock-throwing and vandalism.

The story detail a succession of overtly racist posts, both on the community page, and NT police Facebook page.

The spate of rock throwing followed the annual Lightning Cup Football Carnival, which was held over the Easter long weekend and lead to an influx of visitors to the Central Australian town.

But while the threats of violence against Aboriginal youth suspected of being involved was restricted to the keyboards, the Alice Springs Volunteer Force has hinted that it could escalate beyond the computer screen.

In a post to the closed community forum, Hall said the group was beginning a “second wave of recruitment”.

Ex- or current military men are welcome, the post says. It mentions the meetings will be published in the Centralian Advocate. 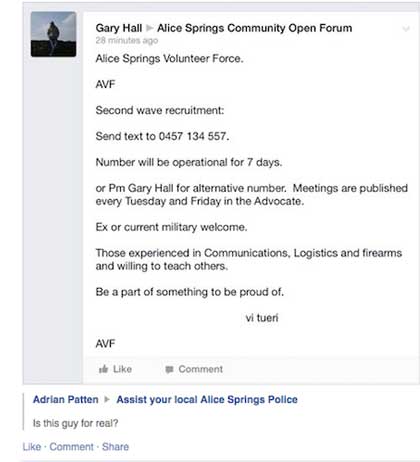 Mr Hall also calls on those who have experience in firearms.

“Those experienced in communications, logistics and firearms and willing to teach others,” the post says. “Be something you can be proud of.”

Mr Hall did not respond to requests for comment from New Matilda today.

But he told New Matilda last week the AVF is active in the town.

“It continues to be active in Alice Springs. They are not online, they are not on Facebook they are not known…. They would consider themselves a paramiltary force, not a vigilante force.”

NT Assistant Police Commissioner Jamie Chalker told New Matilda today Mr Hall had previously been spoken to, and his actions were being monitored.

“As has been indicated to him, the upholding of the law is always best left to professional law enforcement officers,” Chalker said.

“At this time no criminal charges are being considered, but he is aware his actions are being monitored.”

While there have been numerous racist posts across social media about the rock-throwing incidents, the call to arms from the Alice Springs Volunteer Force has attracted concern and condemnation.

On one Facebook post, a commentator says “Creating a vigilante group to stop the vigilantes makes no sense at all. The police are recruiting now so instead of bagging them and their response time why not grow a pair and sign up. Then you wouldn’t need your little group!”

Another comments, “Take a look at social determinants of behaviours/health then you all might understand how to configure target organisations without bullets.”

In the meantime, the situation around rock-throwing, and vandalism has led to an extreme crack-down from the NT government, with NT Chief Minister Adam Giles warning that children would be placed in child protection if they were caught throwing rocks at police.

“Any child that we grab, we will assess them for their status in relation to being in a state of neglect, which means if there is no parent to take them home to, or the parents are unable or unwilling to look after these kids, then those kids will end up in the child [protection]system.”

The Northern Territory has some of the highest rates of Aboriginal child removal in the country. Aboriginal children removed from their homes are more likely to end up in contact with the criminal justice system.