So, Australian Federal Police Commissioner Andrew Colvin Deputy Commissioner Mike Phelan of the AFP have finally fronted up to the press.

There will be no apology to the families of the dead Australians.

The concession is that Phelan, who was the senior officer who authorised the passing on of the information that led to the arrests to the Indonesian police, had agonised about his decision – before and since.

It was a hard decision, said Phelan. But he would take a lot of convincing to make another similar decision.

The big rhetorical point from yesterday’s press conference was that Lee Rush, the father of Scott Rush (one of the Bali 9 who had previously been on death row) was not the source of the AFP information. The AFP already had a number of members of the syndicate under surveillance.

That was never the point of the moral charge against the AFP. The charge was one of duplicity.

Robert Myers, a barrister working for Rush Snr, contacted Damon Patching, a Queensland police officer seconded to the AFP, and advised of his concerns that his son was leaving Australia for no good purpose.

Patching raised the possibility of a passport alert, and offered to raise the matter with officers involved in the case. Patching later told Myers that the passport alert had been activated.

The inference from this is that Patching was told by his bosses that it was all fixed up. Rush Jnr would not be allowed to leave the country. Rush Snr’s concerns were put at rest. 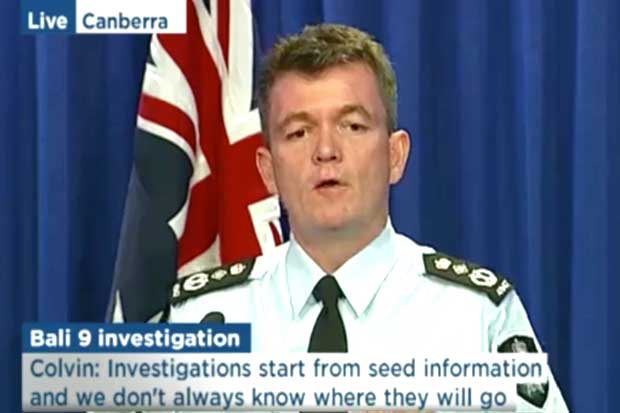 Effectively, the father who went to the police for help was given a false impression so that he would not talk to his son and put the whole operation at risk. The Rush family and Myers, and probably Patching, were all victims of this duplicity.

But the point of that duplicity was so that everybody, Rush included, could be betrayed to their death despite Australia’s opposition to the death penalty and its accession in October 1990 to the Second Protocol to the United Nations International Covenant on Civil and Political Rights, which obligates us to do everything in our power to stop the death penalty being imposed.

And what a betrayal it was. A letter was sent on April 8, 2005 from Paul Hunniford, the AFP liaison officer in Bali to the Indonesian National Police (INP). It named eight couriers: Yang, Nguyen, Lee, Cao, Huang, Lau, Lawrence and Norman.  It also named Czugaj and Rush. It didn’t name Sukumaran because the AFP were not aware of him.

The letter suggested when people should be arrested by the INP so as not to set off an alarm. And the letter asked for intelligence in return.

And the AFP continued to provide information, even after the Indonesian authorities had made very clear their intention to seek the death penalty.

It was operationally appropriate and in accordance with the guidelines at the time, said Commissioner Colvin. It is the tax minimiser’s excuse – it was legal.

The actions of the AFP were only in accord with the guidelines because the ban on providing information cut in when a person was charged. One imagines that this was intended to allow the provision of broad strategic intelligence about illegal activity that would not lead to any individual being arrested.

It could hardly be meant to apply to providing names, localities and pack drill so that people could be arrested and charged and executed.

The other main rhetorical point from yesterday’s press conference was that the AFP couldn’t arrest any of the Bali 9 before they left. They didn’t have enough information.

The letter to the INP suggests otherwise. The detail of the information provided by the AFP to Indonesia suggests that a strong case of conspiracy was available before any Australian left our shores.

But what about when they came back? Kilograms of heroin strapped to one’s body at Sydney airport makes for pretty good evidence of illicit importation.

The AFP says it didn’t need Mr Rush’s information. It was legal. And they couldn’t arrest them before they left. And so they’d do it all again.

That’s the moral case presented by the AFP.

I have two small comments.

The AFP may feel aggrieved that none of the politicians from both major parties who have put the loopholes in place and allowed their exploitation are not similarly called to account.

And “it was legal” is never an answer to a moral charge.

Stephen Keim SC is a Brisbane-based laywer and the patron of Australians Against the Capital Punishment. You can find out more about AACP here.