An international human rights organisation has issued a scathing criticism of a deal that will see Cambodia host asylum seekers currently on Nauru in return for increased aid payments from Australia, describing it as “effectively a bribe”.

With refugees expected to start moving from Nauru shortly, Human Rights Watch has escalated its condemnation of the plan, joining scores of other NGOs and the United Nations in panning the deal.

“The Australian government is trying to pay Cambodia to take some refugees off its hands and its conscience,” Elaine Pearson, the Australian director of Human Rights Watch said.

“This isn’t a solution, but rather a business deal at the expense of some very vulnerable people.”

In September 2014 then Minister for Immigration Scott Morrison shared a glass of champagne with Cambodian Interior Minister Sar Kheng and singed a Memorandum of Understanding, establishing the terms of the deal.

Australia offered the impoverished nation $40 million while Cambodia agreed to relocate asylum seekers who had attempted to come to Australia by boat but been sent to offshore processing and resettlement on Nauru.

Asylum seekers who have been found to be refugees on Nauru are slowly being released from detention into the community but are only permitted to stay in the country for five years, and have experienced great difficulty once released onto the tiny island.

In a statement issued on its website Human Rights Watch said the transfers must not go ahead and that Cambodia was already mistreating refugees currently in the country. 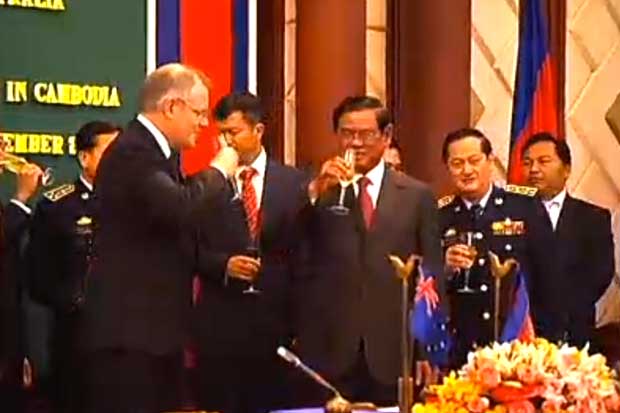 Other organisations have been raising similar concerns for months, pointing to Cambodia’s history of refoulement of Uighur asylum seekers and ongoing treatment Montagnards fleeing Vietnam.

What exactly will happen to the extra $40 million handed to the Cambodian government as part of the deal is also a cause for concern. Australia has agreed to cover various resettlement costs for the refugees.

Dr Janet Hunt, an academic at the Australian National University with expertise in economic development and growth, said corruption was a well known problem for Cambodia.

“[The Australian government] should not be sending these people offshore, they should be accepting their international responsibility to process asylum seekers and accept refugees,” she said.

“But there needs to be transparency and accountability about the expenditure of those funds so we can see it is spent on such resettlement programs.”

Despite the difficulties faced in Nauru, refugees have been hesitant to agree to transfer to Cambodia. According to reports only a handful have agreed to the move, while Cambodian officials have indicated their country will only accept a very small number of refugees.

In order to encourage refugees to relocate the Australian government has reportedly offered incentives, including payments.

“Australia has already offered what is effectively a bribe to Cambodia to take refugees, and now there are reports that it is effectively doing the same with desperate asylum seekers in Nauru,” Pearson said.

“This would be the Abbott government’s latest attempt to offload all responsibility for people who have fled war, ethnic cleansing, and atrocities.”

New Matilda put questions to the Department of Immigration, which were referred to Minister Peter Dutton’s office. The Minister’s office did not respond to them.

Questions to the Department of Foreign Affairs and Trade also failed to receive any respone.