Teanau Tuiono is a Maori activist helping to build solidarity in Aotearoa (New Zealand) with the movement against the forced closure of Aboriginal communities in WA and across Australia, including NZ protests on the upcoming Day of Action, Friday May 1.

Here he speaks with Padraic Gibson from the Jumbunna Indigenous House of Learning (UTS) about the common struggle of Indigenous peoples against settler-colonialism.

PG: Since the movement has taken off here in Australia against the forced closure of Aboriginal communities, particularly the threats to communities in WA, there has been an outpouring of support from Maori in Aotearoa, but also from Maori here in Australia. Can you talk about the common history of colonisation in this region that would lead Maori to identify so strongly with this struggle?

TT: With establishment of the settler colonies, particularly the English speaking ones, New Zealand, Canada, the United States and Australia, we saw the same process.

They were good at colonisation by the time they got to us – years of experience – starting with places close by like Ireland.

Large tracts of lands could be claimed because they called them terra nullis, (a land without people – which in every case in turns out there were people there) – or they would make Treaties and then break them as soon as they could.

Failing this they would just go straight to War. It is a common history of lies, theft, murder and genocide.

I’ve been to Australia a number of times and land-wise, it’s massive, with an equally large cultural diversity with the mob there compared with a couple of big Islands here.

So even understandings of space and time can be different. It’s something to ponder and appreciate. Because of that shared history of resistance to colonisation and the many things that we can learn from each other, it is a strong basis to build solidarity.

In contemporary history, we had activists in the 1960s and 70s going back and forth. One day I ended up at the Aboriginal Tent Embassy in Canberra and I met Aunty Isobelle Coe. Sitting around the fire we had a good yarn.

It was the day that the government had announced they would repeal some parts of the Racial Discrimination Act to allow them to push ahead with the Northern Territory Intervention. I sat there and talked to her, we were preparing to march on Parliament. She was telling me about a visit where some Maoris had come about 30 years ago, including Tame Iti. I passed on her greetings to him when I got home. I was saddened when she passed. 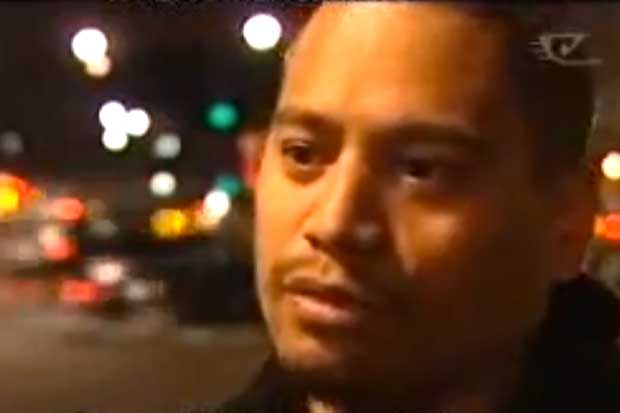 These connections continue today. It’s not unusual for me to run into some Aboriginal activists and when we start talking we realise we are all just one or two steps away from someone here, or over there. I think it’s the recognition of each other’s struggles, the recognition that we are a different bunch of mob, all organising against colonisation.

PG: More recently I know that you collaborated with Aboriginal activists and artists here in Australia to put together an album against the NT Intervention, that had Maori, Pasifika, Aboriginal and Torres Strait artists on it. Can you talk a little bit about that initiative?

TT: The call came out with the NT Intervention and we thought that one of the best ways that we can build solidarity is to use art. Solid Territory came about from us wanting to connect and express solidarity through music. It was done in the spirit of Indigenous self-determination and unity.

We went over to Australia to support the mob that were going through the NT Intervention. When we got home we had some heavy raids happening here. There was an armed lock down of the Ruatoki village and right across the country activists that support Te Mana Motuhake o Tuhoe had their homes raided or were arrested under the Terrorism Suppression Act 2002.

We had gone over to support our brothers and sisters in Australia facing military intervention and I get home and the same thing was happening here. It was ironic to say the least.

There was some great solidarity coming across from that side of the ditch as well. So again, we can try to connect our struggles because sometimes it’s exactly the same sets of circumstances and in that case it was exactly the same week.

PG: One of the other things that you have been involved in is showing some solidarity with the struggles for land justice and to protect the earth that are happening here in Australia being led by Aboriginal people. This is a big issue with the pressure on remote communities, where big mining companies just want the Aboriginal people out of the way and the government serves their interests. I recently visited Borroloola, in the Gulf of Carpentaria, with Jason De Santolo who I know is a brother of yours, that’s his country up there. There is a big struggle taking place against the Zinc mine that has destroyed the river and the massive expansion in gas exploration and the threat of fracking and other extractive project in the region. I know you have been to Borroloola also, could you talk about that? Also, how are these struggles playing out in New Zealand? Is that another point of solidarity – attacks on the communities going hand-in-hand with attacks on the land?

TT: Land and water are important. They are taonga (treasures). They sustained our tipuna (ancestors) before and they can do that for us and our children.

We do have similar sorts of issues. Up north some of the cuzzies are battling against Norwegian Oil Company Stat Oil, who want to do some deep sea oil in the Te Reinga basin. That’s really concerning for a lot of our home folks because it could ruin our traditional way of gathering food.

Obviously the company doesn’t care – they’ll be there for the oil and then they’re gone with the environmental risks being borne by the community.

To me it sounds very similar to what’s happening up there in Borroloola. You've got a mining company coming in there, the river is getting done over, the environment is getting trashed, people can’t live the way (they used to) and access their traditional food sources. It is important to protect dreaming sites, songlines – all sacred sites are important.

We call them waahi tapu. It was good for me and my bro Turumakina to come up there and meet people face to face on country.

PG: Finally could you talk about the actual specific activity that we are seeing happening now against the community closures. Since Tony Abbott made this statement about closing down Aboriginal communities in Western Australia, what has the reaction been there in NZ?

TT: The situation is shocking, but not surprising. Australia does not have a good reputation internationally, particularly with Indigenous peoples.

Words that come to mind are racist, ignorant and backwards. Tony Abott is symptomatic of what is wrong with Australia. That’s probably why it’s had such a strong reaction here with the Maori community, and also with some of our whanau there.

Last count there was at least four rallies planned for the Day of Action on May 1, possibly more. There’s one in Auckland, Wellington, I’ll be there, Christchurch and Hamilton.

PG: Here at the rally in Sydney on April 10, there was a beautiful moment in the rally when some Maori came and did a Haka for the crowd and made a speech in solidarity. This was part of the presentation by the Construction Union here in Sydney, the CFMEU. There are a lot of Maori working in the construction industry here and often quite militant within the union. Do you think that the process of increasing migration of Maori into Australia opens up the potential for these links of solidarity to grow?

TT: I hope so. I know a lot of our people go over there for work. Some I think stay too long and develop a different perspective on what life is like here (come home cuzzies). But we need to remember that it’s someone else’s land. We have to be conscious of this and pay respect to the Traditional Owners, the local mob.

If we end up in mining and a lot of us do – we should connect with the local people there. They might not want that mine there and if not, something needs to be sorted out.

I know if it was mining in our waahi tapu (sacred sites) or someone was trying to dig up our marae, people would put up a fight. Same goes there too.

PG: Any final message to the struggle against the forced closures?