Indonesian media are reporting that Andrew Chan and Myuran Sukumaran have been executed in Indonesia early this morning, over their role in an April 2005 drug smuggling operation uncovered at Denpasar Airport in Bali.

Chan and Sukumaran were reportedly among eight people executed by Indonesia, just outside the walls of a prison on Nusakambangan Island, east of the capital Jakarta at around 3:30am Australian Eastern Standard Time.

They executed prisoners are:

Serge Atlaoui, 51, of France, was scheduled to die with the group, but late last week received a temporary reprieve. Indonesian media are this morning reporting that Mary Jane Veloso, 30, of the Philippines also received a last minute stay.

All of the condemned were reported to have been taken into a clearing near the prison, and shot in the chest.

The Jakarta Post reported a short time ago: "The executions were carried out at 12:30 a.m.," Suhendro Putro, funeral director with the Javanese Christian Church (GKJ) in Cilacap, said in a short message service.

"A Cilacap Police officer said that after the executions, prayers were said for each person according to their respective religion. 'The executions went well, without any disruptions,' he said.

Yesterday, Indonesian officials had initially denied Chan and Sukumaran access to their chosen spiritual advisers, however media reported that prison authorities relented late in the afternoon.

Last ditch pleas for mercy from the families of Chan and Sukumaran fell on deaf ears, with President Joko Widodo staying out of the media spotlight yesterday.

Repeated representations from Australian Foreign Minister Julie Bishop and Australian diplomats were also ignored, as was a joint statement pleading for clemency issued by Australia, France and the European Union. 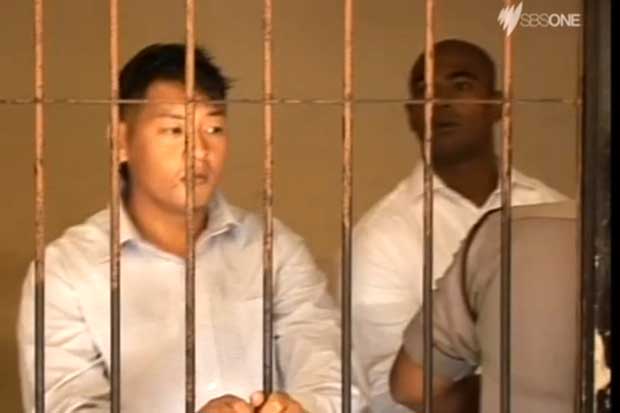 In chaotic scenes at the nearby port town of Cilacap late yesterday, Chan’s brother Michael, addressed media after his final visit.

“I saw today something that no other family should ever have to go through. Nine families  inside a prison saying goodbye to their loved ones,” Michael Chan said.

“Kids, mothers, brothers, cousins, sisters, you name it they were all there. To walk out of there and say goodbye for the last time – it's torture. No family should have to go through it.

“There has to be a moratorium on the death penalty. No family should endure it.”

Sukumaran’s brother also addressed media, revealing that the family had spoken about the futility of the death penalty in Sukumaran’s final hours.

His sister, Brintha, wept on his shoulder as she begged for her brother’s life: “Indonesian people, show mercy. Please don't do this to my brother. Please, please Mr President, Joko Widodo, I beg you please. Please don't take my brother from me.”

“I just had to say goodbye to my son and I won't see him again,” she wept.

Overnight, Julie Bishop told the ABC that there would be “consequences” for Indonesia if it proceeded with the executions. She declined to outline what they would be, stating that government efforts remained focused on gaining clemency for Chan and Sukumaran.

In the end, those efforts – and the pleas – came to nothing.

Chan and Sukumaran’s bodies will be cleaned of blood, and the bullet wounds in their chests stitched back up. Their bodies will then be delivered to their respective families for repatriation to Australia.

Later this morning, New Matilda will publish a special feature on the executions of Chan and Sukumaran, exploring a series of treaties signed by Australian officials which helped pave the way for the deaths.