An Aboriginal ex-serviceman who’s great uncle was the inspiration for the famous poem ‘Coloured Diggers’ was told “this day is not for you”, threatened with arrest and refused permission to march with his non-Indigenous colleagues after joining a procession to mark the ‘undeclared Frontier Wars’ intended to shadow the official ANZAC day march in Canberra.

For the past four years, a procession to mark the thousands of Aboriginal men, women and children who died defending their country from European settlers in the Frontier Wars has shadowed the official ANZAC Day march. This year, the march, which organisers stress is not a protest, attracted upwards of 50 attendees on the centenary of Gallipoli.

But they were refused permission to march up ANZAC Parade this year by Australian Federal Police officers, with one officer allegedly pulling out his taser, according to those who attended.

Murrawarri man Fred Hooper spent six years as a submariner in the Navy and has usually marched in official parades with his non-Indigenous colleagues.

His grandfather served in the first world war and his great uncle was Harold West, who inspired the famous poem Coloured Diggers. West was nominated, but knocked back, for a Victoria Cross for his bravery on the Kokoda Track. This year, Mr Hooper decided to make the trip to Canberra to lead the ‘undeclared Frontier Wars’ march.

But he says he will never march again on ANZAC day after he was threatened with arrest twice, was told to put his Murrawarri Republic flag away, and was escorted by two policemen when he tried to join his colleagues at the Submarine Association.

In 2013, the Murrawarri nation, whose lands take in Barringun in New South Wales, announced its independence from Australia and proclaimed its sovereignty. Mr Hooper is the chair of the provisional council of the state, and wanted to march with the Murrawarri nation’s flag.

While the group were preparing to march, Mr Hooper says police approached and said they had been given instructions to keep them well-behind the main march.

As they assembled for the march to start, the police told Mr Hooper to put away his Murrawarri Republic flag.

“He said if I moved past a certain point with the flag he was going to arrest me. I pulled the flag down off the pole it was on and put it in my jacket. I said I was going to go march with my submarine mates, and he said if you take one step further I’ll arrest you,” Mr Hooper told New Matilda.

“I said ‘You can arrest me, that’s your prerogative. But I’m an ex-serviceman and I’m going to march in the main parade now with my submarine mates. I proceeded to walk off but the police escorted me up and back.”

A video shot by Eleanor Gilbert, the wife of the legendary black activist and writer Kevin Gilbert, shows the confrontation between Mr Hooper and AFP officers.

"This day is not for you." AFP prevent Fred Hooper from marching on Anzac Day, Canberra 25 April 2015-HighRes from Eleanor Gilbert on Vimeo.

“You take another step and you’ll be arrested…. Put your flag down. It’s not a military flag. It’s not part of the parade,” the officer says. “You won’t be joining the parade with that flag. You won’t be progressing past this point til they’ve moved on. They said you have to maintain a distance from them until they move on. It’s not a day for you,” the police officer tells the Frontier War group.

The video also shows two police officers holding Mr Hooper after they escorted him up and back to the Submarine Association.

“What law did I break for wanting to march with the people I served with, who served this country?

“I’m a serviceman who can’t march in the march, because I’m an Aboriginal person.

“I cannot march in a march to celebrate my grandfather, my great uncle who was refused the VC on the Kokoda Trail – Harold West.

“Harold West is the person who started and commemorated the black diggers march in Sydney. I cannot march in this parade to commemorate my people,” Mr Hooper says in the video.

The group were also prevented from laying a wreath to commemorate black diggers and those killed in the Frontier Wars.

“When I asked (the officer) to get someone to present the wreath on our behalf, or request someone from the war memorial to come down and present it to them, we weren’t allowed to do that,” Mr Hooper told New Matilda.

“We did all the right things. We weren’t there to protest, we were there to honour our black diggers and honour our fallen in the Frontier Wars. We were prevented from doing that from all the forces they could muster.”

Other videos show police standing off against protestors, who begin chanting “shame” for their refusal to let them through.

“What about our people,” one man asks before one officer moves to grab him.

“No violence!”, the crowd yells before beginning to chant “shame, shame, shame”.

Aboriginal activist Michael Anderson, said this year’s protest did not reflect the past four years, where the RSL and the AFP had allowed Aboriginal people to conduct peaceful commemorations.

“What was different this time? Why did the AFP turn this normally peaceful event into an ugly confrontational incident,” Mr Anderson said in a statement.

“It was impossible but to conclude that our commemoration group was subject to overt racism, particularly as Fred Hooper, a decorated submariner was prevented from peacefully leading the group up to the War Memorial.”

Mr Hooper said that in past Anzac Day marches he felt proud to serve Australia, but after the events on Saturday it was no longer the case.

“We were segregated away from participating in ceremonies to honour the dead, and honour the people who served this country.

“We are still segregated in this country, and even when it comes to the military. We are segregated on Anzac Day. I think Anzac Day is the last bastion of the white Australia policy,” Mr Hooper says. 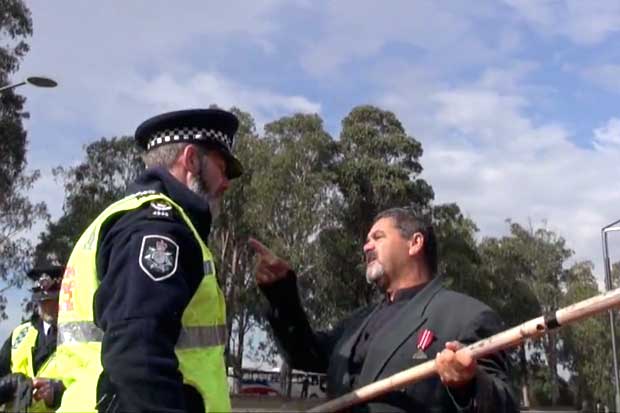 “I used to march because I served this country, I served under the defence forces. But then you look at all the stuff that is happening, the silence that is kept from the rest of the country about Aboriginal people, and those who served in the wars and what they were subjected to when they came back from war.

“It shows we are separate from the rest of the country when it comes to honour our people.

“The Frontier Wars need to be recognised as well, and Aboriginal people should be allowed to march as Aboriginal people. Not specifically in their battalion or where they served. And in marches around the country. I also noticed there was no Aboriginal flag flying at the memorial.”

Mr Hooper says if Australia can spend money recognising Aboriginal people in the constitution, then they can start remembering the Frontier Wars.

“It makes you sad that they are spending all this money to recognise us in the constitution, but they won’t recognise us on Anzac Day.

“It takes millions of dollars for Recognise, but on Anzac Day they can’t even give us a spot in their parades. These are not protests. It’s about wanting a place in the celebration of Anzac to commemorate all the people who fought in wars since 1788.”

But maybe it’s too much to hope for. After the parade, Mr Hooper laid a wreath privately at the Australian War Memorial.

“It was funny, when I went to lay the wreath at the war memorial. I walked in there for the first time and I saw these gargoyles of animals and alongside one side was a blackfella.

“Even the war memorial sees us as Flora and Fauna of this country. And it’s 2015.”