Extreme weather hammering NSW this week has exposed a shortcoming in emergency housing and accommodation, forcing a growing homeless population to improvise in order to avoid a severe drenching – or worse.

While residents across the east coast of the state have been trying to protect their homes from flooding and find safe commutes to work, the drying machines at the Wayside Chapel in Kings Cross have been running non-stop.

Graham Long, CEO and Pastor of the Chapel, said around 100 homelessness people had been arriving each day, hoping to use the showers and dry their clothes.

“[The weather] creates utter misery because we get here in the morning and there’s a queue of people who are soaked to the bone; their clothes, their undies, their socks – completely soaked,” he said.

“If they’ve got a blanket with them that’s soaked too.”

“When a storm happens or if there’s bad weather it means there isn’t somewhere people can be taken to because there is just no additional accommodation,” she said.

“What we need is access to affordable housing so that people can get out of the crisis system and into long term accommodation…the crisis accommodation is getting blocked because there isn’t anywhere to exit people to.” 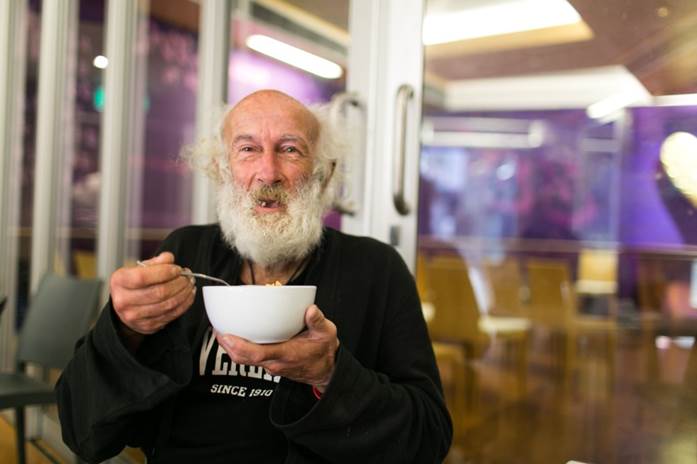 Around 6 per cent of Australia’s homeless population are classified as ‘rough sleepers’, the most visibly homeless who lack any form of shelter.

Their circumstances are hardly ideal at the best of times, but freak storms like those seen this week can be particularly dangerous.

“If you look at some of the research around rough sleepers and their health needs, it’s actually quite significant. They often have health issues they’ve brought to the streets,” McKernan said.

She said the number of deaths among rough sleepers increased during winter.

The City of Sydney’s twice yearly ‘street count’ shows an increase in the number of people sleeping rough in recent years. 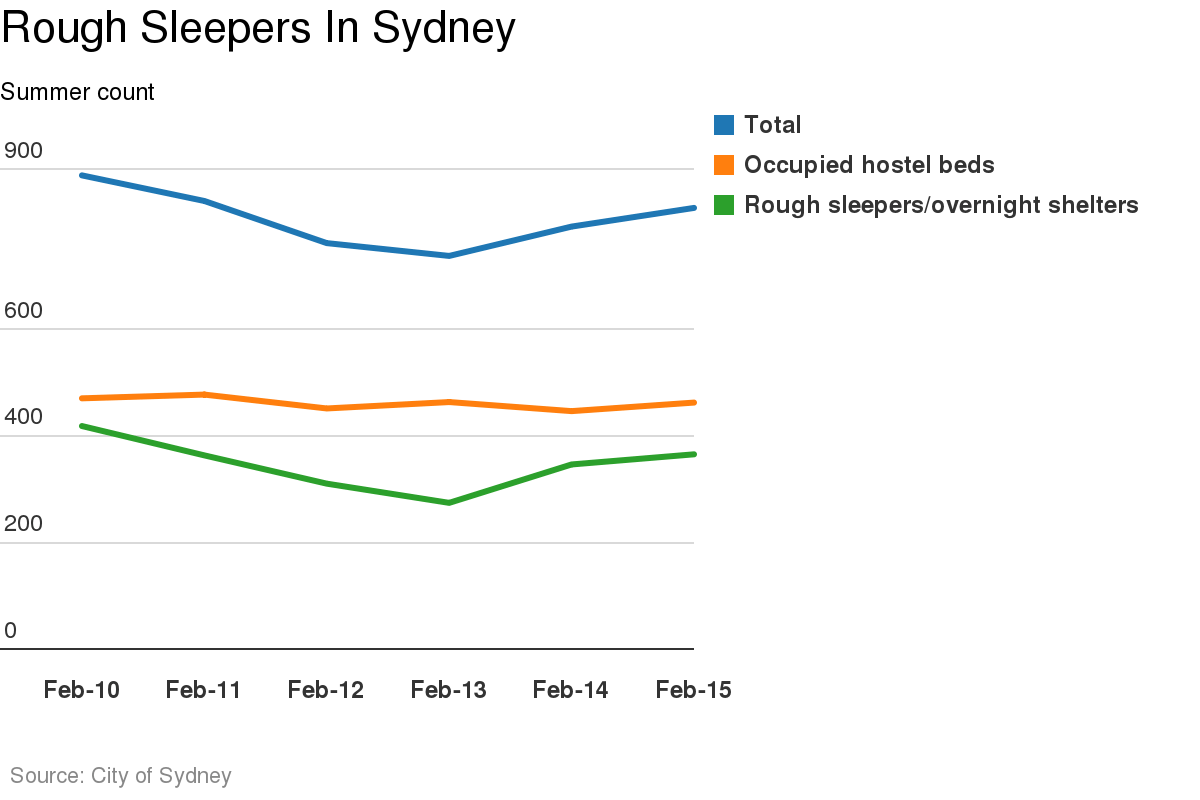 While services are overseen by state and local government, the federal government plays a role too, one that’s been lees involved since the Coalition government came to power in 2013.

Homelessness services around the country were thrown into turmoil as the Coalition held off re-signing the new National Partnership Agreement on Homelessness (NPAH) until just months before the old funds ran out.

The funding for NSW in the 2014-15 financial year has only recently been finalised, despite year almost being complete.

McKernan said that in NSW this meant plans for the current and next financial year had to be made without the federal funding.

“What’s happened for this year is it wasn’t factored into the service system at all so there was $30 million less in the system so the packages provided by the state government were smaller than if they money was there,” she said.

“The refuges and places of respite that we have are – usually their funding is threatened or it’s very very precarious,” Long said.

“I often say to people ‘imagine if we funded defence that way; here’s enough guns and ammunition till June, we’ll let you know if you get funding for another year’.”

The NSW Baird government has committed an impressive $1 billion dollars to tackling housing affordability and homelessness, though it remains unclear where exactly the funds will go.

The NSW Department of Family and Community Service (FACS) added more staff to its Link2Home hotline to help those sleeping rough be connected to shelters during the storm.

“FACS is organising today additional blankets and clothes for distribution by charities as they are stretched under the current conditions,” Minister Brad Hazzard said.

“My office has been in close contact with the City of Sydney about the welfare of the rough sleepers.”

“The City of Sydney last night opened and staffed an emergency shelter at Millers Point for eight people who had been bussed there by MissionBeat.”

But with the number of roofs still far less then the number of heads, the homeless in NSW have had to find other ways to keep out of the storm.

Mission Australia CEO Catherine Yeomans said MissionBeat drivers had been working through the night, picking up rough sleepers and taking them to the Millers Point shelter.

“Unfortunately there are far too many people who are homeless on any given night. For people sleeping rough, storm conditions like what we have experienced this week has a huge impact, particularly for those with health concerns," she said.

“What we have found is that rough sleepers have sought to find shelter in places such as train stations and tunnels. These areas tend to become crowded and cramped, sometimes causing issues between the homeless population as regular sleepers in those areas feel that “their” space is being invaded."

Long said the number of people sleeping in cars was increasing, and that public transport offered another escape.

“There’s a handful of people for whom riding trains is their fall back position in rotten weather. The accumulate fines like it’s going out of style,” he said.

“People have got to do pretty interesting things to survive.”