In the latest instalment of the ongoing saga of racist Australians going feral on public transport, a video of a young woman standing up for a Muslim couple being verbally abused by a woman on a Sydney train has gone viral, writes Dr Chloe Patton.

Stacey Eden, the video’s protagonist, was immediately hailed a ‘legend’ and hero by the media. But not all commentators were so enamoured of Eden’s intervention. UK-based Ashita Nagesh argued that she was displaying a ‘white saviour complex’ because she denied the couple the possibility of speaking for themselves by interrupting them. When Hafeez Bhatti later spoke publicly about the abuse directed mostly at his wife, he stressed that he was not silenced.

Ruby Hamad similarly accused Eden of perpetuating Islamophobic stereotypes of Muslims in the way she intervened, calling Eden’s assertion in the video that the Muslim woman wears the hijab ‘for her own modesty’ as ‘incredibly patronizing’: “The moment we claim to know what goes on in another person’s head is the moment we go from supporting them to silencing them, and that is something that happens to Muslims, especially women, far too often already.”

Eden had also referred to the Muslim woman as ‘this poor lady’, a statement Hamad argued “renders Muslim women as mere objects of pity without agency of their own”. Hamad went on to give tips on how we can intervene in a more respectful manner by speaking only from our own perspective.

It is certainly true that Muslim women are too often represented as victims in need of saving, but how realistic is it to expect someone in Eden’s position to choose the most appropriate words in an unanticipated public showdown with a racist bully?  Shouldn’t we cut her some slack in recognition that in a heated moment like this it is not so easy to police how we articulate our legitimate anger and disgust?

Perhaps our attention would be better directed not at Stacey Eden, but at the way otherwise racist media outlets and commentators have swooned over her.

In his live interview with Eden, Sydney radio host Ben Fordham thanked that bastion of anti-racism, the Daily Mail, for bringing the video to his attention, describing it as follows:

“The footage begins with the woman saying to the Muslim lady, ‘Why do you wear it for a man who marries a six year-old girl?’ The Muslim woman who is sitting with a man next to her and a baby in a pram does not respond. The Muslim woman does not respond. She just decides to sit there and cop it from this racist pig. I know it’s not necessarily racism because we’re talking about something that is faith-based, but you know what I mean.”

But what exactly does he mean? Is it or is it not racism? It’s curious that Fordham homes in on the woman’s implied reference to the prophet Mohammed as evidence of wrongdoing: it isn’t in fact any worse than what listeners to his program are subjected to.

When his regular guest Michael Smith explicitly stated live on air that the Prophet was a pedophile Fordham was as matey with him as usual; he certainly didn’t call him a racist pig. 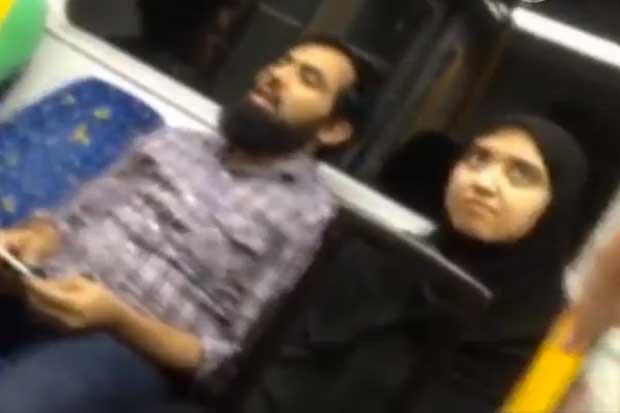 Stacey Eden knew why the incident was racist. “We’ve got little kids beheading people in Syria after the Martin Place siege,” said the woman. “It’s all over the world: read the newspapers… Read the newspapers, 148 people, Christians murdered in Kenya. They’re killing each other in Syria.”

The racism lies in the woman’s use of the notion of ‘Islam’ to erroneously tie together events as a far removed from each other as an Iranian-Australian with a penchant for dressing up as a Shia cleric taking people hostage in a Sydney cafe, the brutal massacre of Christian students in a Kenyan university, a civil war arising out of resistance to a Western-backed despot in Syria, and a woman wearing the hijab on a Sydney train.

And this is exactly the kind of conflation Ben Fordham himself engages in. Appearing on Channel 9 just hours after the Charlie Hebdo attacks, before details of what had happened and who was responsible had been confirmed, he saw fit to hold an entire global religion responsible for the deaths of the French journalists: ‘Islam has a serious problem in its ranks… This is the same thing we’re seeing all around the world… We’re kidding ourselves if we don’t have a conversation to say that Islam has a serious problem in its ranks…’

When presented with the speculation that Al Qaeda in Yemen had taken responsibility for the massacre, he replied:

“To a large degree it doesn’t really matter, it’s like with the Sydney siege, well hang on this guy’s not a member of Islamic State, does it change the end result? Whether it’s al Qaeda, whether it’s Islamic State, whether it’s any other group, they have sent messages out to the rest of the world encouraging people to take up arms, to slash people’s throats, to run people down in cars and that’s what’s happening around the place, and if we keep on ignoring it then we ignore it at our peril.”

In the same interview, Fordham even resorted to the ‘some of my bests friends are (insert minority that is the target of racism to follow)…’ trope:

‘I’ve got one of my dear friends he’s a guy called Hazem, he runs a convenience store on the corner of my place, he’s been around to meet our new baby he’s one of our dear friends. Muslims like Hazem are some of the best people on Earth… but he knows, as many other Muslims do, they’ve got some people in their ranks, and this is not unique to Islam, but it’s a bigger problem in Islam than any other faith at the moment and we need to confront it.’

And so it is Fordham’s love of this Muslim who is deemed safe enough to be allowed near a newborn child that actually reinforces his racist demonisation of Islam as a whole.

In a similarly paradoxical way, the more the media fawns over Stacey Eden and demonises her racist interlocutor the more it underlines its own role in the racism at play.

For the woman on the train is quite clear about where her racist thinking comes from when she repeatedly tells Eden to read the newspaper.

Her mistake was that she expressed her views to strangers on a train, rather than the audiences of 2GB, the Daily Mail, or Channel 9.

* Dr Chloe Patton is a is a Postdoctoral Research Fellow at the International Centre for Muslim and non-Muslim Understanding within the University of South Australia.

Dr Chloe Patton is a Postdoctoral Research Fellow in the International Centre for Muslim and non-Muslim Understanding at the University of South Australia.