At a mining industry dinner late last year the New South Wales Premier Mike Baird made a promise and an announcement, a combination which appears to be on an ugly collision course.

“So-called plans to phase out mining in NSW have no place in this parliament,” Baird announced, “and I’ll be very clear on this, no place”.

In fact, Baird said, he would halve the time it takes to get big mines approved.

He also promised to “crack down” on people engaging in civil disobedience protest against mines. “If you chose to break the law when you protest, we will throw the book at you,” he said.

New South Wales has been a hot-bed of protest in recent years, particularly in the state’s north west. More than 350 people have been arrested protesting against the Maules Creek Mine, near Narrabri.

Despite the unprecedented community opposition, Baird flew in to praise and open the mine last December, flanked by his former Chief of Staff, Steven Galilee, who now runs the NSW mining lobby.

At the dinner, Baird praised the mining industry, stating that “for too long” protestors had taken actions like locking themselves to gates and machinery. He noted that the liability for any injuries currently rests with mining companies.

New Matilda understands Baird’s Liberal government will seek to change Workplace Health and Safety laws and other relevant legislation in the new parliament to reverse the liability, but protestors are unlikely to be deterred by his promise of harsher penalties. 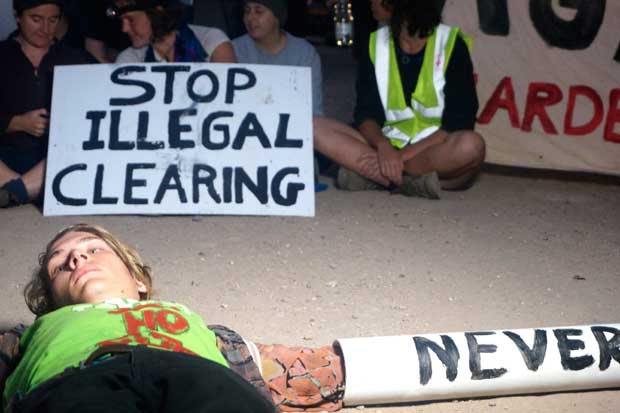 “All of the research shows that more severe penalties are not a deterrent,” said Pauline Wright, the Chair of the NSW Law Society Environmental Planning and Development Committee.

“[Protestors] are a special kind of person, they are doing it in full knowledge of the fact that they’re likely to be arrested and they’re usually well aware of the penalties that apply, but they’re willing to take that action because of their conviction,” Wright told New Matilda.

That’s more or less what all of the protestors interviewed by New Matilda for this story said.

The penalties available to magistrates who hear these cases – typically involving trespass or the charge of hindering mining machinery – are already severe.

Earlier this month, Magistrate Lisa Stapleton – who was brought in to Narrabri Local Court to help deal with the backlog of protestors – proved that point. A total of $35,000 in fines was dished out to 11 people.

One protestor, Josh Brown, received a fine of nearly $8,000. Under some legislation, protestors can face seven years in jail.

The magnitude of Magistrate Stapleton’s fines, though, was unprecedented. Often protestors will be let off with a ‘section 10’, where no conviction is recorded and no fines are issued.

“Our view is that the existing laws are sufficient. If people trespass, and if they have no lawful excuse, then that’s already an offence.

“The virtue or otherwise of the punishment is going to be reflected by how much danger a person is putting themselves or others in while they’re trespassing.” “I guess, for me, I have for a long time been really concerned about the ways we’re able to express ourselves within our democracy, as government seems to be paving the way for big business,” she said.

“When the government’s not listening to community concerns, things like non-violent direct action are the only way for the community to express our concerns.

“Certainly with Maules Creek that has been the case.”

The Maules Creek mine – initially owned by Nathan Tinkler – has been a hot spot for protest because it will destroy a critically endangered forest, one of the last remnants of Box-Gum Grassy Woodland, which has declined to just one per cent nationally and half a per cent in NSW.

There have been court cases, petitions, meetings with government, legal protests, and a criminal inquiry into aspects of the mining company’s plans, but the government has not budged in its support for the project.

It’s this sort of unflinching support for coal mining which pushed Professor Colin Butler – an author to the most recent Intergovernmental Panel on Climate Change report – to take action and lock himself to the mine’s gate.

In the end, it didn’t, but it’s this sort of fear Premier Baird is evidently trying to engender.

And there’s reason to believe Baird will deliver on his promise. In recent years Liberal Premiers in Victoria, and particularly in Tasmania, have introduced harsh penalties for such protests.

Colin Barnett, the West Australian Premier, is in the process of criminalising 'a thing', literally, with the ultimate effect being that any ‘thing’ used during a protest could land you a guaranteed year in the slammer and a $12,000 fine (and double that in aggravating circumstances).

Even extreme penalties such as these are unlikely to deter protestors, though, according to another protestor, three-time Golden Guitar winner Luke O’Shea.

For O’Shea, it was the farming community of Maules Creek who galvanised him to action. His father was born around 50 metres from the Whitehaven Coal water pump he locked on to, in a shed built by his great grandfather.

“When people feel like they are not being heard they will resort to something which is completely outside what they would normally do.”

“When one side starts acting in a very, very heavy-handed way where does that leave the people who, to their core, believe it’s morally and ethically wrong?” he said. As it stands, protestors who receive unusually heavy fines like those dished out by Magistrate Stapleton earlier this month, will often go to appeal, and New Matilda understands all but one of the group will.

While magistrates do their best to weigh up factors like whether anybody was put in danger, any past offences and the character of protestors, they’re “only human”, Wright told New Matilda, and if people think a mistake has been made, that’s what appeal rights are for.

Pat Schultz, an Armidale grandmother and mental health support worker, appealed her $2,200 fine for a ‘lock on’ protest against coal seam gas last year, and had her fine and conviction wiped.

“The Magistrate just stood up and spoke absolute bullshit,” she said.

“Now, I tell you, I’m 63 years old and 5 foot tall, and the magistrate said ‘that tow truck driver must have been terrified’,” Schultz said.

It only took the District Court Judge “somewhere between seven and ten minutes,” she said, to decide the magistrate had erred.

Clearly, under normal criminal law, the judiciary usually takes the view that people should not ‘have the book thrown at them’ for acting on their moral conscience.

Protestors are quick to point out that actions of past movements, like the suffragettes, unionists, and civil rights campaigns, have employed similar tactics for the greater good.

“I just feel like, internationally, peaceful civil disobedience is a legitimate form of protest,” Naomi Hogan, another protestor who got a $350 fine this week, said.

While at the mining industry dinner Mike Baird said he respected people’s right to protest, it shouldn’t be too far into the next parliament before he clarifies how far that belief extends.

New Matilda put questions to the Premier before and after the recent state election, but he has declined to make public comment on his private promise to “throw the book” at people taking non-violent direct action against the fossil fuel industry.

So watch this space.