They may have been small in number, but they were large of heart. And mouth. Although in Melbourne not quite loud enough to drown out the counter-protest, which appeared to outnumber the actual protest.

The keynote speaker at Melbourne’s Reclaim Australia rally – part of a national movement that reared its head in at least 16 cities yesterday – was to have been Daniel Nalliah, the head of Rise Up Australia.

Nalliah, a Christian evangelical preacher, is most famous for claiming that he received “prophetic dreams” that the Black Saturday bushfires, which killed 173 people, was a punishment from God for Victoria’s decriminalisation of abortion in 2008.

Alas, Nalliah never found voice. One of the nation’s least prominent religious extremists was never able to warn fellow Australians about the dangers of religious extremism because the anti-Reclaim protestors were louder, larger in number, and much more prepared.

Victorian Police had formed a line in Federation Square intended to separate protestors from anti-protest protestors. But somehow, the po-faced officers ended up penning the two groups in together. Which made for an entertaining afternoon.

Reclaim Australia – which has repeatedly claimed it is not racist – took to its Facebook page to vent: “It is well know that the Victorian Commissioner of Police Ken Lay has expressed anti racist sentiments towards the movement. It seems the Victorian Police are no longer impartial.”

Organisers provided this helpful picture to explain the cock-up… which doesn’t really explain anything, but has a definite ‘Kennedy was shot from the grassy knoll’ feel about it, so we’re running it anyway. In any case, the rally never really happened, which seemed to particularly upset one tall, rangy Reclaim protestor. Wearing all black, with Doc Marten boots and an angry scowl, he charged up to a Melbourne protestor and screamed ‘Aussie Aussie Aussie, Oi Oi Oi’ into her face.

She screamed back… with the help of a microphone and speaker.

‘Go home racist, Go Home’. Followed by a growing chant from the crowd behind her of ‘Fuck Off Racist, Fuck Off’. He slunk back into the crowd, defeated and deflated, but not before delivering a two-finger salute.

But he rallied a little later, after snatching a ‘No Room For Racism’ sign from an anti-Reclaim protestor. He tried to hurl it at the opposition. It travelled about two feet. A friend picked it up, so they tried to set it on fire. That didn’t work either. Which is one of the problems with plastic signs. They’re not all that flammable.

So he hurled it randomly into the crowd again, this time striking one of his Reclaim compatriots in the side of the head.

Things pretty much dragged on like that for the rest of the afternoon. And not just in Melbourne.

Around the nation, Reclaim Australia protests fizzled out, failing to inspire the predicted tens of thousands of ‘Aussie patriots’ angry at the ‘Islamification’ of Australia… whatever that actually means (about two percent of Australians list their religion as Islam).

Sydney apparently fared a little better, with around 500 people braving heavy rain for a rally in the centre of Sydney (after a meeting the day before at the Lindt Café, of course).

Which also means that 4,567,000 Sydneysiders didn’t turn up to the protest. But of those who did, several managed to storm the stage (anti-protest protestors, of course) throwing things into disarray.

But that was small potatoes compared to what happened to Reclaim Australia’s national social media effort, which was derailed before it even began.

Their official Twitter account got ‘reclaimed’ by a man named Jeremy, who began tweeting about his car troubles, ‘punching cones’, and picking up an Asian girl at a local kebab shop.

Jeremy started with the sort of enthusiasm that is stock in trade for the racially and religiously imbued.

But it didn’t last long.

I'm not at the event yet shiiiiiiiit my car won't start 🙁 but it's ok I got some time.

Turns out, ‘Jeremy’ couldn’t even make it to the rally.

FUUUCK the car is just not gonna start – can anyone gimme a lift? Damo is not picking up the phone he's pilled out, in QLD – DM me for deetz

And so, unable to join the festivities, Jeremy got creative.

And then there was this.

I like vegemite on toast, it's great in a toastie after a big night who gives a shit if it's halal what even the fuck is that

When Jeremy finally did make it to the rally, it turns out he didn’t like what he saw… or heard.

Reclaim Australia finally cottoned on, and issued this:

ATTENTION EVERYONE – We deeply apologise for Jeremy's contributions to our account we've removed his access – we are preparing a statement.

And then, remarkably, this:

After long discussion with our social media manager we will not be deleting the offending tweets due to our commitment to #freespeech.

I decided to reclaim #ReclaimAustralia's account before I go back to Aasia's place- wish me luck! haha accounts mine now cunts

And to add insult to injury, Jeremy has nominated a charity for those who ‘liked his work’.

thinkin bout stuff happened 2day- I think if ya liked my tweets, you should give $10 to @RACSaustralia & @ASRC1– mates turned me on 2 em

Not that the thoroughly worthy RACS can expect a flood of donations – the Reclaim Australia Twitter account only ever attracted a bit over 400 followers. 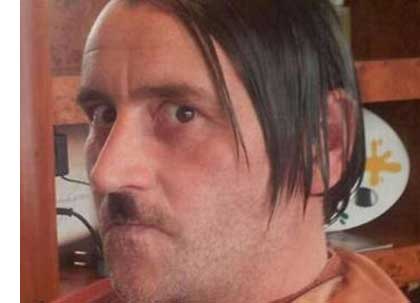 The social media effort was a little more targeted on Reclaim’s Facebook page, with hearty messages of congratulations from Muslims-haters the world over, including a special message from PEGIDA, a German neo-Nazi organisation trying to accomplish the same bans in Europe.

Athough the message is unlikely to have come from PAGIDA’s founder and leader Lutz Bachmann, who resigned from the group in January 2015 after a string of racist remarks, before a photograph emerged of him posing as Adolf Hitler.

Notwithstanding the stumbles and wobblies – what hate group is going to have everything run smoothly on their first attempt – it was still an excellent day's work in defeating extremism.

So go back to bed people. Nothing to see here.