Australia has a rich albeit relatively recent history of politicians ‘nude-ing up’ when they need to quickly gain a public profile. And contrary to popular opinion, Prime Minister Tony Abbott didn’t invent it.

That honour belongs to Ted Baillieu the former Victorian Liberal premier who, in 2006, started inviting media to photograph him emerging from the surf (or a pool), like the Great Political Adonis that he was.

Unlike the hairy, barrel-chested Baillieu, Debnam is a rakishly thin, pasty-white man with a slightly concave chest and child-bearing hips. Despite this, he rose to lead the NSW Liberals from 2005 to 2007, and although he had several years of leadership incumbency to lift his public profile, he also took to ripping his kit off in the months leading up to the 2007 poll. And not just at the beach.

Debnam also stripped down to his smugglers on the banks of local rivers, where he would paddle away from the cameras in a kayak. With no pants on. He even wore his Speedos bushwalking. As you do.

In total, the opposition leader fronted the press at least seven times in various states of undress, so much so that it made headlines with the tabloids in London but, sadly, failed to capture imaginations in NSW. 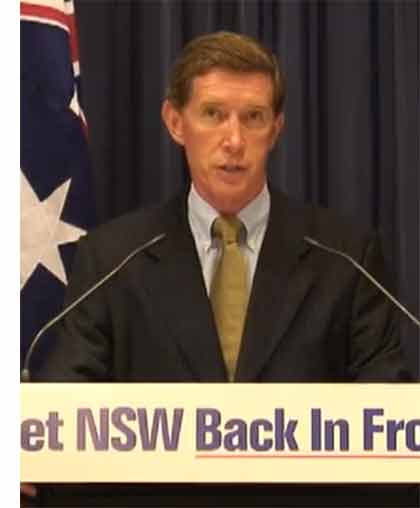 Which is not all that surprising. It’s hard to imagine women changing their vote based on the amount of flesh a politician reveals (although conversely, it’s not so hard to imagine the opposite occurring if the gender roles were reversed). But either way, after leading his party to defeat in 2007, the blue-blood Liberal from Vaucluse finally resigned from parliament in May 2008 in protest at plans by the NSW Liberals to support Labor’s push to privatise the NSW electricity industry.

Cue the deep, delicious irony… and enter Luke Foley, Labor’s opposition leader who also led his party to defeat this weekend by opposing the privatisation of, you guessed it, the last remaining bits of publicly-owned electricity infrastructure which his party had already begun selling off less than a decade earlier. In this case, Foley was opposed to the sale of the ‘poles and wires’ that deliver power to NSW homes and businesses.

Mercifully, Foley kept his kit on during the election campaign, despite having a clear public recognition problem. He had, after all, only risen from the ashes of the Labor Party left just three months out from yesterday’s election.

But Foley did elect to go the full monty in a policy sense, exposing himself in all his glory via that well-worn political path of ‘dog whistling’ in the hope of appealing to the less generous side of voters.

In the final week of the election campaign, Foley advanced the theory that selling our poles and wires to private interests would help the Chinese spy on Australia. After all, Foley surmised, if the network were up for sale, China might buy it. And all sorts of defence facilities have electricity wires running to them, right? So, you know, national security and all that.

“The (electricity) distribution network goes to Holsworthy Army base, to the Richmond RAAF base, to our defence installations,” Foley said. “Of course the security agencies (including ASIO, ASIS) will have some views on these matters.”

Honestly, you can't make this shit up.

If ASIO and ASIS did have views, they never shared them. But NSW voters did, disrobing the Labor emperor on Saturday night and delivering a strong victory to the NSW Liberals.

Admittedly, Labor did claw back some of the seats they lost previously to the Liberals. But in truth, they could have run a house brick as leader and achieved essentially the same result, such was the size of the 2011 Liberal landslide.

Whatever your views on privatisation of essential public assets, for his part Baird ran a largely positive campaign, and articulated a clear vision. Foley, by contrast, ‘went negative’, then went racist, and throughout consistently played loose with the truth.

At one point, he claimed that the Baird government had slashed health spending. In truth, it’s higher now than it’s ever been, and has increased every year since the Coalition took office at a rate greater than inflation.

And amid his fanciful claims of the threat from the ‘Yellow Peril Electricity Overlords’, Foley also tried to argue that the privatisation of poles and wires would force electricity prices through the roof (unlike privatising the generators that produce the electricity, which of course is thoroughly awesome). Foley pointed to South Australia as the proof. 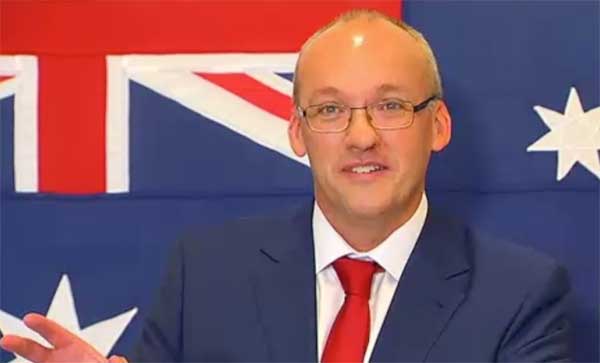 Under privatization, electricity prices did rise in South Australia, but what Foley neglected to mention is that Victoria (which is also privatised) has lower prices than NSW and Queensland (which are not privatised).

All up, Foley's campaign was a thoroughly predictable, old-school Labor display of spin and racial smear.

And so, if you reside on the left of politics, and still harbour the fantasy that the Labor Party in anyway reflects your interests and aspirations, then you may have found last night’s campaign result quite depressing.

Thinking back in history will only make that feeling worse.

It was the ALP’s West Australian premier, Carmen Lawrence who introduced mandatory sentencing in 1992 as a dog whistle to an electorate hostile to Aboriginal people.

It was Labor’s Clare Martin who promoted a crackdown on ‘humbuggers’ (Aboriginal people, again) on the first day of her 2005 re-election campaign.

Federally, it was Labor who introduced mandatory detention of asylum seekers under Paul Keating. It was Labor who ‘lurched even further to the right’ twoi decades later by condemning men, women and children to a life of misery on Nauru. And it was Labor who backed the Northern Territory intervention in opposition, ran it for five years in government, and then extended it for another 10 under the ‘Stronger Futures’ legislation.

Of course, federal Treasurer Joe Hockey’s comments this morning slamming Labor for a racist campaign – while fair – fail to acknowledge his own party's history of filthy, race-based dog whistling. But then, when was politics ever about reality?

Despite all this, NSW lefties can still take heart from this weekend’s election. There is a glimmer of hope on the horizon for those who believe morality should play a part in politics.

Last night, the Greens claimed the inner-city seats of Newtown and Balmain despite expensive campaigns from Labor. They also claimed Ballina in the state’s north, and are on track to win Lismore.

Newtown and Balmain include some of the wealthiest areas of NSW, places where – critics suggest – voters can afford a moral compass. Neither major party is likely to make much headway in either seat while-ever the Greens remain politically disciplined (think the Democrats in 2006-07), avoid political scandal (which they stubbornly tend to do) and continue to promote the foundation policies in which they believe.

But the seats of Lismore and Ballina are different stories altogether. They provide a fascinating scenario for people interested in principled politics.

Even though Labor and the Liberals disagree on ‘poles and wires’ (when the political winds suit) on one major issue, they are in lock and step: coal seam gas. And it was precisely this explosive political issue that proved the undoing of the National Party in Lismore and Ballina, two otherwise safe seats which, until last night, were both held by the NP with 75 percent of the two party vote.

Assuming Lismore does fall to the Greens, then in order to win them back, the Nationals will have to force their Coalition partners to articulate a policy on coal seam gas. And that policy will have to be, at the very least, that it’s banned from the green belt in the state’s far north coast.

Expect a major rift within the Coalition in the coming four years, as the Nats and Libs thrash out a Coalition position, because it's not just about two seats – gas miners aren’t just eyeing off the north coast, as proponents of the national ‘Lock the Gate’ movement will attest.

You can also expect Labor nationally to get start getting twitchy about seats like Sydney (in the inner west) held by Tanya Plibersek. The Greens are a long way from grabbing the seat, but a high profile ‘celebrity’ Greens candidate at the next federal election will go a long way.

But back at the state level, the weekend’s likely result provides a tantalizing political scenario: the Lock the Gate movement, which bolstered the Greens’ vote in regional seats, might more accurately now be called the ‘Close the Gate’ movement, at least from the two major parties’ perspectives. Because they’ll now be wondering if the horse may have already bolted.

Once you let another party get a foot in the door, it’s much harder to remove them. Even if the Nationals force a moral position on coal seam gas (imagine that, parties implementing policies that reflect the values of their voters) they’ll still have to confront the power of four years of Greens’ incumbency in Lismore and Ballina, which is no small thing.

Even more interesting is that while four Greens seats in a lower house dominated by Liberals will have limited effect on the life of this parliament, both major parties will now be looking, nervously, four years ahead.

Negotiating legislation through parliament via minor parties has long been a thing in NSW – governments haven’t had the numbers in the NSW upper house (the Legislative Council) for several decades. But with the rise of the Greens overnight, what are the prospects of a hung Legislative Assembly in four years time?

Suddenly, we have something that looks suspiciously like a burgeoning democracy. And that’s a pretty bad thing from the major party perspective.

So strap yourself in for an interesting four years, lefties.

Coal seam gas is now officially a BIG political issue in NSW. Also, watch for the rhetoric against the Greens by Labor and Liberal to dial down a notch or two over the coming months and years, as both major parties contemplate the chance, however small, of having the Greens as 'coalition' partners in 2019, just like Labor did in Tasmania a few years back.

All up, it's going to be a fascinating four years. Just as Peter Debnam took to the ocean in 2007, our two major parties both look to be entering troubled waters.