The category five system ripped through the island nation last week and the people of Vanuatu are still struggling to recover. It is the country, and potentially the Pacific’s, worst cyclone disaster.

Prime Minister Joe Natuman put the call out to the international donor community while launching a Flash Appeal at the offices of the National Disaster Management Office (NDMO) yesterday.

$US 29.9 million is required to address the needs of the nation over the next three months, across the priority areas set by the Vanuatu government.

The flash appeal is based on assessments which have found about half of the population – 166,000 people – have been severely affected.

The United Nation’s Office for the Coordination of Humanitarian Affairs says surviving food stocks will not last past today, and supplies are diminishing.

Up to 96 per cent of crops have been destroyed. 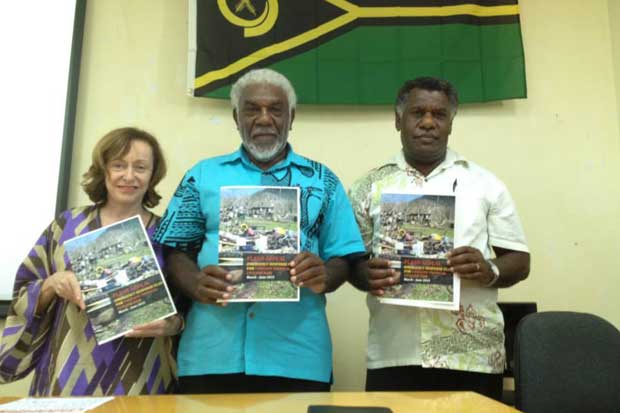 The water situation is even more critical, with recent assessments showing the majority of water tanks were damaged by Cyclone Pam, and almost half the population – 110,000 people – are relying on contaminated water.

75,000 people are in need of shelter and on the islands of Tongoa, Emae and Errmango, up to 90 percent of shelters have been wiped out.

The Shepard Islands and the Tafea group of Islands, which includes Tanna Aneityum, Futuna, Erromango and Aniwa, were the hardest hit.

There is still a need to obtain access to people who have been affected. 22 of Vanuatu’s 83 islands have sustained severe damage.

Humanitarian Coordinator for Vanuatu, Osnat Lubrani told New Matilda she had been involved in recent disaster recoveries, but Vanuatu was particularly shocking.

“I think what is difficult about this disaster is it has affected the entire country,” Ms Lubrani told New Matilda.

“I have dealt with serious disasters recently – on the Solomon Islands there was more loss of life than here in the entire country, but it was more contained to a particular area.

“This is where it is a bit shocking. It has affected so much of the population, so many kids are out of schools, people are without homes. Getting Vanuatu up on its feet is quite a challenge.”

UNOCHA Team Leader for the United Nations Disaster Assessment and Coordination, Sebastian Rhodes Stampa told the press conference the agency was working closely with the Vanuatu government to complement its disaster response.

“The process is to make rapid joint assessments, government-led, where some of our folks can rapidly determine what the key critical needs are in the field,” Mr Rhodes Stamp said.