Journalists are angry, and so should they should be. A shake of the hands between Labor and the Coalition, and their craft was sold out: the House of Representatives finally passed the long-discussed but swiftly assembled data retention bill on Thursday afternoon, with just three dissenting MPs.

Today it comes before the senate where it is expected to pass without much fuss.

Labor’s support for the bill was bought last week after the Coalition agreed to introduce warrants for access to journalists’ metadata, supposedly a protection mechanism to combat the inevitable chilling effect on whistleblowers and the slowing of the free flow of information that warrantless access would have begot.

It’s easy to be cynical about this deal, a trade that will no doubt leave the major parties feeling good about themselves. George ‘let me explain what metadata is’ Brandis is surely relieved his post-18C pet project is finally on the home stretch. And by publicly extracting a compromise on journos from the Coalition, Labor now gets to claim it forced a backdown from the government on civil liberties, while remaining a small target on national security, the Coalition’s only goal-scorer.

But if one imagines a responsible opposition party, genuinely interested in making good law and sticking up for journalists, one would think that party might have allowed news organisations to put their case on data retention to Parliament, as they were due to do before Labor agreed on the amendments and cancelled the hearing.

They might have waited for the Parliamentary Joint Committee on Intelligence and Security to receive submissions and then report on its inquiry, now cancelled, into the use of metadata to determine the identity of a journalist’s source. A responsible party also might not have locked the minor parties out of that Committee, which considered the data retention bill and recommended that Parliament pass it.

They might also have tried to delay a vote on the bill so that MPs in the House had more than one hour to read the thirty pages of amendments issued to them during an adjournment of Parliament, and so that the debate didn’t have to be squeezed in before question time.

The warrant scheme itself is an improvement on earlier incarnations of the bill, but it’s not much of one. The fierce opposition of the media union to the softness of the compromise has been widely reported, and the arguments for the inadequacy of the scheme are compelling.

Journalists and media organisations don’t have to be notified that a warrant has been sought to access their data. That means they can’t contest the warrant application.

Instead, a PM-appointed ‘Public Interest Advocate’ will make arguments about the application. Unlike in an adversarial court, the advocate won’t represent the journalist’s interests against those who seek access to their data – instead, the advocate has to consider a range of public interests, including the gravity of the matter for which the warrant is sought, and the extent to which the information would assist the agency seeking it.

Most chillingly, a person can be sentenced to two years in prison if they disclose information about whether a so-called journalist information warrant has been requested or whether one exists.

Apart from these concerns, the position is also startlingly incoherent. As must be obvious to the many lawyers of the Labor caucus, journalists are not the only people who depend on confidentiality to perform their job. 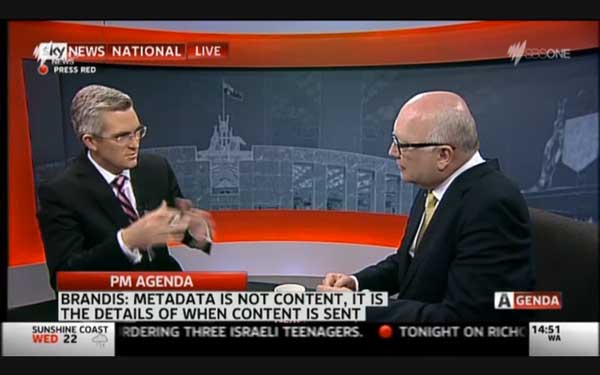 Journalists have now risen to the challenge, after being slow to prioritise reporting on data retentions and its implications. But the mainstream media has largely told the story of data retention with shades of self-obsession.

‘Data retention: access to journalists’ records to be tougher under deal between Government and Labor Party'; ‘Media companies welcome extra protections for journalists as metadata laws pass the lower house’; ‘Data retention laws: media kept in the dark on metadata’: these headlines are typical of the media’s framing of this story.

But the focus on its own interests is both predictable and irresponsible. The question of the design of the warrant scheme for access to journalists’ data has obscured the stark fact that we are a hair’s breadth away from legislating the loss of privacy for all Australians.

After months of debate, a long and sometimes embarrassing campaign by the government, and a gutsy effort by activists to fight against mass data retention, the upper house will shortly decide on whether to sign off on a law that will ensure the undiscriminating collection and storage of all Australians’ data for two years, and its availability to twenty government agencies without the bother of obtaining a warrant.

The weakness of the protection given to journalists should be of concern to anyone interested in the practice of investigative journalism, and ultimately in democracy, but it is most remarkable for the fact that it was the sorry bartering chip which Labor accepted in exchange for the transformation of this country into one where we are all suspects.

The warrant scheme is not nothing, but it may as well be: Labor has left the rotten core of the bill entirely unassailed, and now the 23 million Australians who don’t work in journalism will be subjected to mass warrantless surveillance.