It is hardly surprising that privatisation is a major issue in the NSW election. Opposition to privatisation helped Labor in Queensland, just as it hurt Labor in NSW in 2011. Research shows voters reject privatisation, and do not buy the idea that ‘there is no alternative’ to selling existing assets to fund new assets.

While politicians may assume the electorate doesn’t understand basic finance, most people are intelligent enough to know that selling assets to raise funds is not necessarily the best way to finance new investment, particularly when Australian governments can raise funds at much lower cost than private corporations. Whoever owns our electricity and other utilities, we still have to pay for them.

One argument in favour of privatising electricity networks (‘poles and wires’) doesn’t get much airing. That is the idea that governments should flog them off to the private sector before they become ‘stranded assets’. It rests on the death spiral model – based on the ideas that because the costs of transmission and distribution networks are largely fixed, and that because regulators have encouraged over-investment, prices can only rise, encouraging lower consumption, more uptake of rooftop solar, and eventually a significant number of customers going ‘off grid’, in a destructive feedback loop of lower demand leading to higher prices leading to lower demand ….

There would be some justice in seeing those who are in denial of the future of renewable energy (the ‘coal is good for humanity’ crowd) lose their money, but in reality the costs would be spread widely through superannuation funds.

Rather than allowing that to happen, it is more likely that the conditions of privatisation would be such as to preserve the industry’s profitability by encouraging high electricity consumption, contrary to economic considerations of equity and environmental protection.

In an interview on ABC Radio, Vince Graham, CEO of Networks NSW – the government-owned holding company for the state’s three electricity network companies – suggested that they could avoid a death spiral if they adopted a tariff structure offering lower prices for those with higher consumption, thereby making use of all that spare capacity. “Paying less for using more” was the ABC title of the interview.

In denial of basic economics, Graham dismissed any suggestion that consumers might sensibly react to high peak prices by reducing demand, saying: “The whole concept of demand or capacity-based charge is that consumers will respond and use less, and I think that is a fundamentally flawed proposition.”

Just to make sure that people wouldn’t be tested on this proposition, he said that there was no need for smart meters in NSW. These would give consumers much more information on usage and prices, and therefore, as in any well-informed market, more consumer control, but electricity utilities have done all they can to thwart installation of smart meters: only in Victoria are they in widespread use. 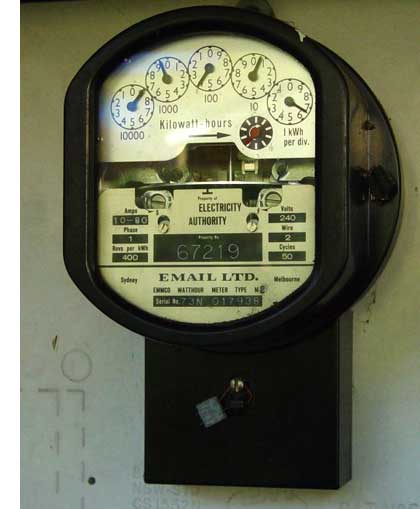 Other Australians have to rely on the 1894 electromechanical induction meter (pictured right), virtually unintelligible to any reasonable person.

When questioned on the effect his expansionist plans would have on renewables, Graham went on to say that “the renewable industry should be challenged to compete in precisely the same way we are” – effectively denying the existence of the subsidy to the coal industry in not having to pay for its contribution to greenhouse gas pollution (the IMF estimates that coal prices should be 66 per cent higher than their market price to account for its contribution to greenhouse gas pollution). He then said how his proposed charging structure would stimulate the uptake of electric vehicles (of dubious environmental benefit when the electricity is generated by coal). He then made some irrelevant comparisons with ISP charging.

The tariff structure implicit in his proposition is to set a high price for the first few units, with lower prices for additional use, as illustrated below. 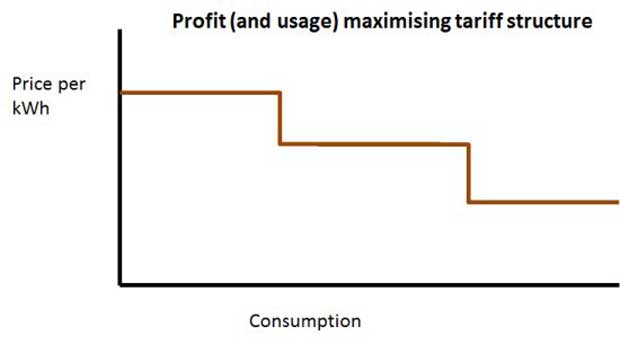 It’s a common pricing structure in firms with some degree of monopoly power (formally known as Ramsay Pricing). There is a high price for the ‘must have’ first few kWh for lighting and essential appliances, less for cooking (where gas is in competition) and heating (where insulation can reduce demand), and less for heating the swimming pool, running the 20-year-old bar fridge, or air-conditioning the dog kennel, thus making sure current keeps flowing in the network and that the coal mines don’t suffer any downturn in demand.

It’s completely at odds with the tariff structure that would meet conservation and equity objectives, with a low price for essential units (say the first 10 kWh a day), and a rising tariff for more discretionary consumption. 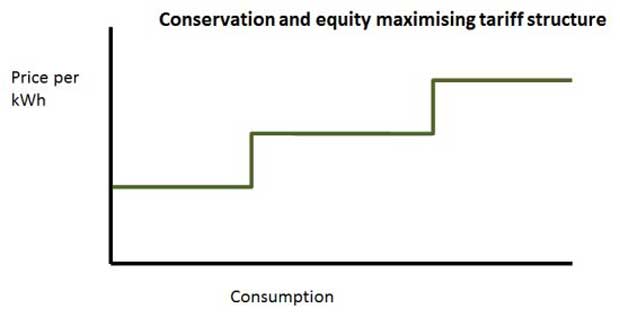 The tariff structure is only one way the network industry can get its way and continue to support the coal industry. It can also discourage co-generation by offering miserly feed-in tariffs, imposing charges for solar connection, and even by lobbying governments to prohibit consumers going off grid – it’s always possible to think up ‘safety’ issues when it comes to electricity.

Environmentally and socially responsible charging would be associated with low fixed charges consistent with seeing electricity supply as a basic right, while still using pricing (aided by smart meters) to effect efficient market outcomes. The benefits in terms of reduced utility hardship could be considerable.

These are the issues which should be foremost in the debate about privatisation. Ownership, in itself, is a comparatively minor issue, which seems to be about a choice between supporting union featherbedding or unjustified executive salaries and profits in privatised utilities. The coal industry has hedged its influence through political donations (generally but not exclusively favouring the Coalition) and through Labor-affiliated mining unions.

Public ownership in itself does not guarantee social or environmental responsibility. Publicly-owned businesses operating on commercial lines have essentially the same incentives as private firms. And worse, they can be used as cash cows by state governments to support their budgets – essentially a sales tax on basic utilities.

Rather, governments should take back full control of energy and water utilities to implement social and environmentally responsible pricing. It may be that they sub-contract management to private companies, but they should never hand over the assets as the NSW Government is proposing.

There would be some stranded assets, but that cost is minor in comparison with the cost of defence assets which (fortunately) never fire a shot in anger over their lifetime. And the coal industry should go the way of other heavily subsidised industries – they’ve had 100 years of warning.

Ian McAuley has shares in renewable industry companies. He is also on the board of an organisation giving financial counselling, including to those having difficulty meeting high utility bills