Thousands of Aboriginal people and their non-Aboriginal supporters have hit the pavement today – from Canberra to South Hedland, from Adelaide to Lismore – demanding an end to the Barnett government’s plans to close up to 150 remote Aboriginal communities in Western Australia.

The Aboriginal community of Yarrabah, next to Cairns, battled a tropical cyclone, but still came out in force to protest.

And many who couldn’t make it staged a virtual protest, with hundreds changing their Facebook and Twitter profile pictures, and uploading signs calling for a stop to the controversial proposal.

Pictures have flooded in from as far afield as Canada and the United States. 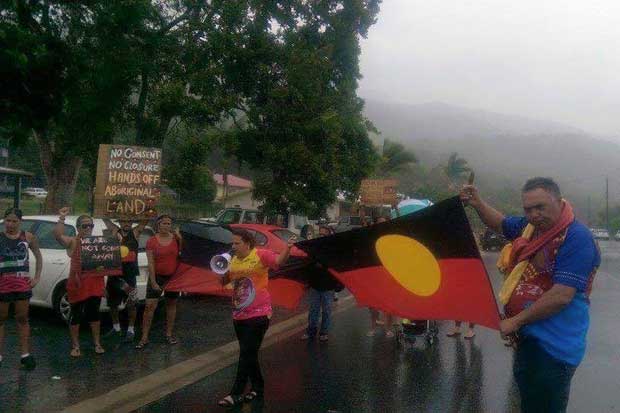 The national day of action fell ironically on the same day the federal government is trying to push its agenda on the official “Close the Gap” day.

But protestors all around the country say that you can’t close the gap by closing communities.

Late last year, WA Premier Colin Barnett announced he would close up to 150 remote WA communities after the federal government forced the state to sign an agreement handing over responsibility for infrastructure and municipal services in these areas.

In exchange, the WA government would receive $90 million to aid the transition.

Mr Barnett has stated in the past that many of these small communities were ‘unviable’, and at times only had 10 people living in them. Last month, he also claimed that a review of the communities slated for closure would most likely uncover child abuse and domestic violence.

Barnett’s plans were widely condemned across Australia last week when Mr Abbott backed the Premier, by insinuating Aboriginal people were living in remote communities there as a ‘lifestyle choice’, and being propped up by the taxpayer.

In Canberra, about 150 protestors marched from the Aboriginal Tent Embassy to Parliament House, to confront the usual police barricades aimed at containing peaceful protests. Aunty Jenny Munro, from the Redfern Aboriginal Tent Embassy in Sydney, welcomed the protestors and said this was a critical cause.

“These are all forced closures, our people have got nothing to do with moving off land. They in fact want to stay and maintain their right and obligations to country,” Aunty Jenny told the rally.

She said the loss of native title rights could lead to a claim for compensation because “our title is extinguished if we aren’t living on country under the racist legislation they call Native Title”.

“It’s how our people have been deprived of basic human rights by the illegal regime that has been running this country for 227 years, without the consent of the Traditional Owners, the first peoples of this country.”

“We cannot let any government off the hook without these answers. Where will Aboriginal people be forced to live? How many people will be forced off their land? What communities?” Greens Senator Rachel Siewert savaged the proposed cuts, and said she would be raising the matter in the Senate later today.

“The government don’t make their decisions based on evidence. They base it on their ideology, and you need to look no further than the insensitive, inappropriate remarks from our Prime Minister, the so-called Prime Minister for Aboriginal Affairs, when he said this was a lifestyle choice.

“… He’s not fit to be the so-called Prime Minister for Aboriginal affairs.”

Yamitji man Shaun Harris, who flew in from Perth for the Canberra protest, said he believes 20,000 people will be made homeless through the closures. “This is forced land acquisition and genocide… they need to be held accountable.”

Arrente man Chris Tomlins, down from Alice Springs in the Northern Territory, invoked the memory of the NT intervention, and the continuing rights abuses in his own country.

“Abbott’s lifestyle statement is a blanket policy and is incoherent. It is not a conversation. It is pre-determined. It is not a debate, it is the old white Australian policy.

“One minute we are pushed out, the next we are herded back like a mob of cattle. This is lazy, unreasonable and shallow politics. Again and again and again we are facing more uncertainty. We already suffered from decades of disconnection, degrees of poverty and displacement.

“Historically this is just not true.”