At least three refugees living in the community on Nauru were hospitalised overnight after a stone throwing attack knocked a couple off a motorbike, and a young woman attempted suicide in the Anibare camp.

Around 10pm a group of refugees were attacked while riding motorbikes, with a man in his late 20s struck in the head by a rock, causing him to crash the bike and leaving him “badly injured”, according to a friend who visited him in hospital after the incident.

Images of the man show him bleeding heavily from his face.

New Matilda understands both the man and his wife remain in hospital, and that Nauruan police have questioned them, as well as another group of witnesses.

“It’s very common for the locals to throw stones, it happened to my friend last night… it’s common it’s, not something unusual,” one refugee said. 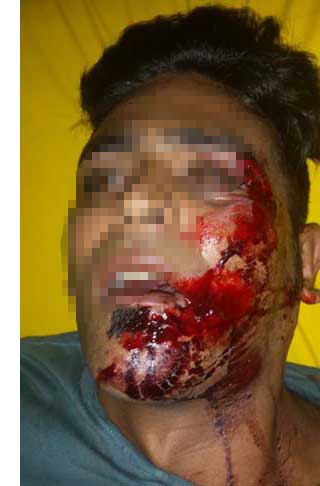 After hearing of the incident refugees and locals gathered at the hospital, with police on hand to prevent conflict between the groups.

In a separate incident that took place a short time after the stone throwing, a young Iranian woman was also left hospitalised after attempting to commit suicide.

Refugees who know the woman told New Matilda she had suffered severe back ache in recent months, preventing her from basic tasks, including shopping and cooking.

They said she had only been offered painkillers, and had become desperate for proper treatment.

One of these friends, who lives on the same block in a different room, had been caring for the woman last night, but was forced outside to make a call.

When she returned, the woman was in the bathroom.

“I call her, are you hearing me, and she didn’t answer me, and I was worried,” the friend, also an Iranian, told New Matilda.

“I opened the door and I saw her… she was bleeding, she was awake.”

“She was lying on the floor, her head was on the toilet, and she was not good, she was, how can I say, her face was completely yellow. She was not feeling good at all.

“I called other friends and I called the ambulance and police and anyone I know.”

According to the friend, Nauruan police arrived first, followed by an ambulance a full hour after the incident took place.

“Everything here is slow. The life here is nothing for them, the refugee, are not important here. No-one care about us,” they said.

The friend accompanied her to Nauru’s only hospital in the ambulance, crying as they travelled.

After being given painkillers, both returned to the Anibare camp in the early hours of Tuesday morning, where the injured woman is now resting. As New Matilda revealed last week, former Minister for Immigration Scott Morrison had been left ‘shit-worried’ after a video informing asylum seekers they would never be settled in Australia caused escalating protests in September last year.

While these concerns related to the situation in the centre, tensions have also been steadily building in the Nauruan community as refugees are processed and released.

Protests have become a regular occurrence, with the Nauruan government issuing restrictions on where they are allowed to take place. Images seen by New Matilda (below) show women and children protesting today, holding banners that read “we are refugee women, we are not attacker” and “stop violence against women and children”. Refugees are currently negotiating for the right to protest outside the Australian High Commission.

Close to 200 people, including children, were taken into custody after protesting earlier in the month.

Violence against refugees in the community has been regularly reported since released from detention began, including multiple attacks on unaccompanied minors.

According to refugee and human rights law experts, Australia maintains an obligation to refugees resettled on Nauru even after they are released from detention.

The Department of Immigration has been contacted for comment.