Over the weekend, New Matilda’s Max Chalmers broke a major story about the inside workings of the Department of Immigration and Border Protection.

You can read the story here – Inside The Department: The Explosive Leaked Transcripts From The Moss Review.

It’s based on leaked transcripts of interviews between Philip Moss, the man appointed to look into allegations of rape on Nauru, and one of the nation’s most senior public servants, Mark Cormack, the bureaucrat directly responsible for the welfare of people held in immigration detention.

That mainstream media have completely ignored the story is remarkable, given what the leaked transcripts reveal:

1. Scott Morrison played a video to asylum seekers telling them they would never be settled in Australia, regardless of whether or not they had a legitimate claim for asylum. It sparked widespread outrage amount detainees, numerous incidents of self-harm, including among children, and protests that lasted several weeks.

2. As protests intensified, Morrison became “shit worried” that he would have another Manus Islands on his hands – a reference to the violence in the Papua New Guinean detention centre six months earlier which saw an asylum seeker, Reza Berati, beaten to death by guards paid to protect him.

3. The most senior bureaucrat at the Department of Immigration responsible for the welfare of asylum seekers (Mark Cormack) told Morrison he would compile a list of names of Save The Children workers who he suspected may be involved in assisting asylum seekers in their protests.

4. 10 Save The Children workers were subsequently ordered off the island, although the bureaucrat conceded they may never know if they identified the correct workers.

5. Cormack told Moss that they needed to be “very careful” about what they said the Minister did in relation to establishing the Moss review. 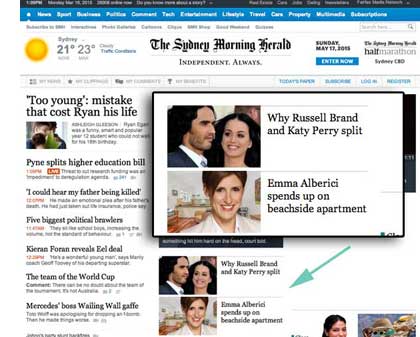 By this morning, not one single syllable of the Cormack revelations* has been reported by any other media outlet in Australia. Even the Sydney Morning Herald has refused to report it, despite New Matilda providing them with a copy of the leaked transcripts (the Herald obviously had more important stories to tell, like explaining why Russell Brand and Katy Perry split, or bringing you details of Emma Alberici’s new beachside apartment).

Already, tens of thousands of people have read the story on the New Matilda website, but we need hundreds of thousands to read it if any pressure is going to be brought to bear on the Abbott Government to provide a full and frank disclosure of the facts.

So we need your help to get the story out there. We need you to become the mainstream media, courtesy of your own social media.

New Matilda has begun advertising the story via social media – we’re investing $1,500 in Facebook advertising this morning, to try and spread the story more widely. That level of advertising will put the story directly into the news feeds of around 1,000,000 Australians.

It’s obviously going to seriously stretch our budget, but we believe very strongly in this story – it lays bare the truth about our treatment of some of the world’s most vulnerable people.

If you’d like to contribute, one way you can help is by subscribing to New Matilda (if you haven’t already). You can also donate to this campaign by direct deposit to our account:

You can also contribute directly via Paypal to enquiries@newmatilda.com

And of course, one of the best things you can do to help New Matilda get the story out, is to share it via your own social media, such as Twitter and Facebook (you can also share this story, about the lack of reporting on 'that' story as well).

You might consider including a message such as, ‘I’ve shared this article because mainstream media are ignoring it, and it’s important that Australians read it – these laws are being carried out in all our names. Please share it on your wall, and encourage others to as well.’

New Matilda has only reported seven pages of several hundred from the leaked Moss review transcripts – we’ll bring you more details on these explosive documents later today, and over the course of the next week.

As always, thanks for your help. If the mainstream media won’t do their job, then with your help, we’ll do it for them.