I'd been at a party I organised for the University society, of which I was president. My financial situation was pretty dire, and the $12 cab home was too much of a stretch, so I decided to cycle. It wasn't far, would only take 15 minutes, and it was a journey I'd taken many times before.

Part of the route home is on a shared path. On one side are high fences, separating the walkway from the large homes at the far end of their large backyards. On the other side, the five or so sets of train tracks that carve Sydney's inner west in half. A lone street lamp lights the entire 15m stretch of path.

With the benefit of hindsight, I realise this path is perhaps not the best place to be, alone, in the early hours of a Saturday morning. But the indignant feminist in me resented that I should have to alter my path home, just because of my gender.

The path has an incline, and I was riding uphill, slowly, slightly out of breath. A man appeared at the other end of the path. He was tall, easily six foot, burly, with a footballer's build, white, and wearing a dark hoodie that obscured his face from the lone street lamp. The path is narrow at the best of times, so I moved as far to the right as I could, to make way. I kept my head down and kept pedalling.

As our paths crossed, he grabbed me and threw me off my bike. It's all a blur now, but I yelled, kicked, screamed. In that instant I was made painfully aware of how alone I was: the backyards were too big for anyone in the houses to hear me, the passing trains would drown me out anyway. It was just me, my bike, and this burly man.

And then, I really was alone. As suddenly as he'd grabbed me, he was off, running down the hill, back the way I had come, and away from where I needed to go. As soon as I realised I was safe, the adrenaline that had caused me to kick and yell now transformed me into a howling, blubbering mess. Crying so hard I could hardly see where I was going, I got back on my bike, yelping and sobbing the rest of the way home. I passed a pub that was closing and the straggling patrons looked out, bemused.

That was one year ago today. The early hours of March 15th, 2014. A day I'll probably never forget. 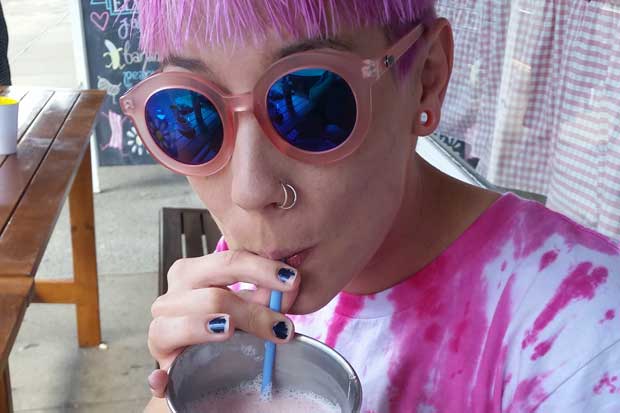 With reports released this week that show that street harassment is awfully common, this story is probably not new, not surprising, and perhaps eerily familiar for many women reading this.

I couldn't help but think, over and over, "what if?" What if I hadn't screamed? Fought back? What if I'd had my handbag on me, rather than securely in my basket? Would he have just tried to rob me? Or was he trying to rape me? With reports indicating that 1 in 6 Australian women have experienced sexual assault perpetrated by someone other than a partner, it wasn't exactly fanciful for my mind to jump to these conclusions.

Or, and for me this is perhaps the worst, was he, a burly, able-bodied man, just trying to mess with me, have a little fun? What if his only intention was to grab the young woman, give her a little fright and then carry on, no harm done?

No harm done. If that was his intention, it hadn't worked. The experiences of others, the statistics I'd heard, made my mind leap to conclusions. Instilled in me now was a fear for what could have been. I escaped with only scrapes on my hands and knees and a scratch across my chest as my physical reminders of the incident. But that scratch across my chest was a marker, a reminder of my narrow escape, and as a result, I was broken.

The next time I left the house, two days later, in broad daylight with the guard of two of my housemates to get lunch, I crumpled into a heap in the local cafe's toilets.

When I tried to go to uni days later still, I had four panic attacks in the course of a two-hour seminar, sobbing on the floor of the bathroom, unable to breathe.

I found myself, a woman who never had any trouble speaking her mind in class, suddenly unable to speak. My tutor would only need to look at me, and that would make the fear rise up, choking me.

It was months before I got back on my bike, even longer before I went out alone after dark. For months, if I was walking down the street and a man passed me I would be unable to breathe, paralysed with fear. I would cower to the side of the pavement, giving him the widest berth possible. My studies fell by the wayside, as did my extracurriculars.

But I was lucky. Soon, the fear and the panic started to fade. With the help of a therapist, I was getting my life back together, one step at a time.

Now, a year later, the whole ordeal is almost a distant memory. I completed my degree, I now cycle again, I'm no longer fearful of being out at night.

Not knowing the man's intentions still bothers me. Not knowing whether I'd come very close to something much, much worse, and my fighting reaction had saved me, or whether I'd spent months living in fear because a drunk bloke decided to have a laugh by lashing out at a woman half his size on a dark path in the middle of the night.

The not knowing plagues me, but it also inspired me to get my life back on track, and not let him win. I may not know what he had intended to do with me, but he also doesn't know how much he crippled me, and I don't want to let him leave his mark on me permanently. He can have those few months after the attack, but he can't mark the rest of my life. 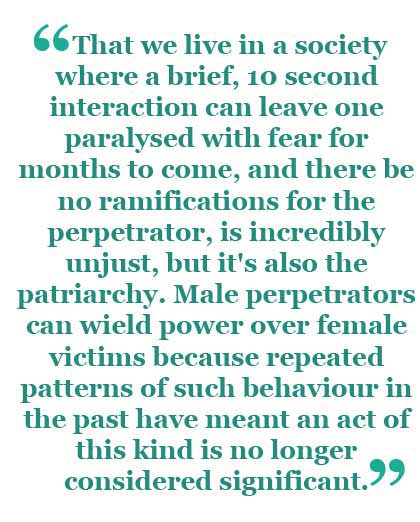 That we live in a society where a brief, 10 second interaction can leave one paralysed with fear for months to come, and there be no ramifications for the perpetrator, is incredibly unjust, but it's also the patriarchy. Male perpetrators can wield power over female victims because repeated patterns of such behaviour in the past have meant an act of this kind is no longer considered significant.

Perhaps rightfully, the police could do nothing, because I was [mostly]physically unharmed. They took my statement, but did not follow anything up because there was little they could charge the man with, even if they could find him, in the absence of CCTV, or even a description of his face, something I was unable to give.

Ending street harassment starts with men recognising their privileged position in society, and understanding that their actions and remarks, even if they seem flippant, could have serious ramifications for their victims, despite their intention.

Scarier still, though, is that despite how common instances of physical street harassment were noted in the Everyday Sexism report, still more common are instances of domestic physical or sexual violence than that perpetuated by strangers. When writing this piece, part of me worried that I would be helping to perpetuate the monster myth, something Tom Meagher wrote so eloquently about last year, following the huge response to the tragic murder of his wife, Jill.

I worried that my story would be an unproductive addition to the conversations surrounding violence against women. When speaking to a friend, I aired my concern that my response to the whole incident was overblown, a storm in a teacup, if you will.

It's frightening, but this is the nature of the discourse around violence against women. It is just so common that I actually have the (for want of a better word) 'luxury' of worrying whether my attack was violent enough to be worth writing about, whether speaking about my attack will be productive or destructive for other women and their experiences, whether or not my fear is legitimate.

Stop and think for a moment. This is the world we live in. A world where women can’t safely walk down the street at night, and are then made to feel that their fear is not legitimate, because their experience is so commonplace.

Today, I feel almost back to my old self. It's been months since I've had a panic attack (something, I should add, I had never experienced until the attack, and for that I count myself incredibly lucky), and I no longer cower when I pass men in the street.

Against my therapist's wish, however, I still haven't been back to that 15m stretch of path. The rational side of me knows that seeing that path will help in my recovery process, the other side knows that I shouldn't let this incident prevent me from inhabiting any space I choose.

But another, larger part of me has quietly decided that that path is no longer a space I will choose to use. There are plenty of other ways to get home, and my indignant feminist side will have to be content with that. For now.