OK. Firstly, I know I’m always asking you for money. Yesterday, I was asking readers to contribute to New Matilda, to help us keep on keeping the bastards a little bit more honest (that request still stands, by the way!).

Today, the request is a little more personal.

Over the last few years, I’ve formed a friendship (via Facebook) with a retired United States soldier called Ethan McCord. This evening, Ethan was arrested by police in Wichita, Kansas for three outstanding traffic fines. He’s being held, pending his family raising the bail money.

As a retired Army veteran, Ethan and his wife Tammy, and their two kids, eke out a pretty tough existence. Tammy doesn’t have the funds to get Ethan out on bail, and is urgently trying to raise $1,250 for the bonds, and the remainder for the fines.

Tammy has a Paypal account – tammyann.mccord@gmail.com – which is the best way to assist. Every little bit helps.

Yes, its traffic fines. Yes, Ethan should have paid them. Yes, he’s a random stranger on the other side of the world.

And yes, I realize it’s equally random for a small independent media organisation in Australia to put a call-out to raise funds for him. But there’s a pretty important reason why Ethan is someone deserving of your help.

If the name ‘Ethan McCord’ rings a bell, it’s because he played an extraordinary part in the Iraq war – a chapter, in fact, that still reverberates today.

Ethan was the soldier in the infamous Wikileaks’ video – ‘Collateral Murder’ – who is filmed running from the scene of an American slaughter, with a severely injured child in his arms. 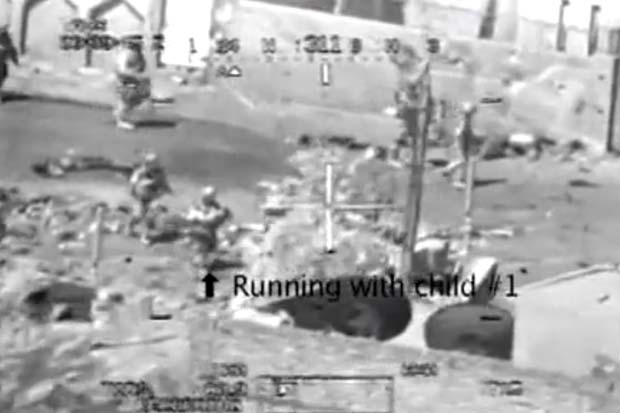 The boy was one of two children in a van which had arrived on the scene of an attack by an Apache helicopter, which killed a group of men, including two journalists. The driver of the van had arrived to try and help dying victims, and was himself then fired upon and killed.

His two young children in the van were severely injured.

Ethan’s unit arrived on the scene a short time later, and after he discovered the boy and his young sister in the front seats, he defied the orders of his superiors and ran from the scene with the boy in his arms, in a bid to try and get him urgent medical attention (help which was initially refused, but eventually granted).

Both the children survived, in large part because of Ethan’s courage and actions.

At 14:01 mins in the video below, you can see Ethan cradling the child in his arms as he runs from the scene.

It was an extraordinary act of compassion and courage, and one for which Ethan and his family have paid a heavy price.

Like Chelsea Manning – the brave US soldier who leaked the video (and was sentenced to 35 years jail) – Ethan was targeted by the US military for his actions. He was admonished at the scene by his superiors, and later warned to “get the sand out of his vagina” and do his job, and discouraged from seeking psychological help for what he’d witnessed, and what he’d been part of.

Unsurprisingly, Ethan has a daily battle with Post Traumatic Stress Disorder, and has tried to commit suicide at least twice. His long battle with depression and the affects of war are a daily part of his Facebook posts.

His story is a crucially important part not just of the history of the Iraq war, and the atrocities committed in our name, but of the broader movement against injustice. Bare in mind, Chelsea Manning is still in jail in part over the leaking of the video, and Julian Assange is still seeking refuge in the Ecuadorean embassy in London. That might give you some context about the importance of this event, and Ethan’s role in it.

Since returning home, Ethan has been a strong and consistent voice against the atrocities committed in Iraq, and despite receiving barely enough for him and his family to live on, he has consistently railed against American injustice, in particular the use of force against black Americans by police.

Ethan’s family urgently needs to raise enough bail money to get him out of jail, in no small part because he has a very deep mistrust of government and authorities, and is already traumatised enough by what he’s gone through.

You have no real reason to help a man on the other side of the world who should have paid his traffic fines when they were due.

You can find Ethan’s Facebook page here. He’s a great online friend, and always interesting. But a warning – he has a bit of a potty mouth, and a pretty twisted sense of humour (he’s also frequently inspiring).

If you have access to Paypal, you can help raise funds to get Ethan out on by sending money direct to Tammy’s account – tammyann.mccord@gmail.com

$2, $5, $10, $50 – whatever you can contribute, every little bit helps. And if this story is shared widely enough, there might be more money raised than the amount owed. It will help Ethan and his family live a little more comfortably (not a bad cause in its own right in my view).

If you don’t have access to Paypal but would still like to contribute, you can help out here at an Indigegogo fundraiser I just started.

I haven’t spoken to Ethan about this yet – he’s in jail, after all – but later in the year, we might try and fundraise to bring him and his family to Australia for a speaking tour. If he’s available, I promise you, he’ll be worth meeting in the flesh.

Finally, please share this story widely on social media – the further it gets out, the more we can help.