Climate change adaptation measures could cost Africa $50 billion per year by the mid-century, and put up to 50 per cent of the continent’s population is at risk of undernourishment, even if international efforts to prevent a ‘dangerous’ 2°C temperature increase are successful.

African nations do not have the domestic resources to head off this crippling economic cost, a report from the United Nations Environment Programme (UNEP) and Climate Analytics and the African Climate Finance Hub says.

The report builds on UNEP’s warnings last year that climate adaptation costs in developing countries, when combined, could cost between US$250 and US$500 billion by 2050.

UNEP Executive Director, Achim Steiner, said that the best long-term response is “ambitious global mitigation action” but it is now clear that “large-scale and rapidly increasing funding for adaptation” is also required.

Despite the intensifying warnings from experts, Australia has been slow to act on climate change. It is the only nation to repeal a price on carbon.

At Kyoto meetings in Cancun last year a series of key strategies were developed to prepare for the challenge of adapting to climate change, particularly in developing nations.

Key amongst them is the United Nations ‘Green Climate Fund’, which Tony Abbott has previously derided as “socialism masquerading as environmentalism” and “a Bob Brown bank on an international scale”.

After facing significant pressure over refusals to join nations like Germany, France, America and Japan in contributing to the fund, designed to help developing nations adapt, the Abbott government redistributed $200 million from the foreign aid budget last year. 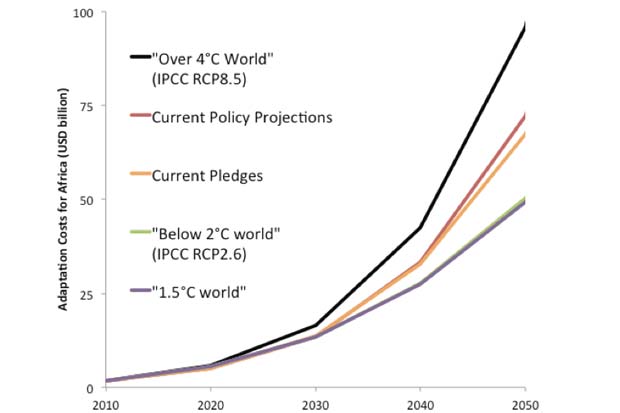 Bangladesh is already spending $1 billion a year – six to seven per cent of its budget – on climate adaptation measures, a figure which the World Bank has predicted will blow out to $5.7 billion by 2050.

This week's UNEP report warned that under a high warming scenario, temperatures could exceed 2°C by mid-century across much of Africa, and reach between 3°C and 6°C by the end of the century.

This would have a severe impact on agricultural production, food security, human health and water availability, experts said.

"This is not just a question of money; millions of people and their livelihoods are at stake," Binilith Mahenge, President of the African Ministerial Conference on the Environment and Tanzania's Minister of State for Environment, said earlier this week.

“Global warming of 2˚C would put over 50 per cent of the African continent's population at risk of undernourishment. Yet, the IPCC showed that without additional mitigation we are heading to 4˚C of warming.”

Case study modelling suggests that, even under moderately optimistic growth scenarios, nations like Ghana, Ethiopia, South Africa and Togo could only afford to pay between US$18.2 million (Togo) and US$961 million (South Africa) by 2030.

But it’s not just poor nations that need to prepare for climate change impacts.

A report from two Queensland University academics – Dr Martina Linnenluecke and Prof Andrew Griffiths – have warned that Australian businesses are failing to prepare themselves.

“There has been little discussion of how to cope with the physical impact of climate change,” they said.

Extreme weather – not heightened temperatures – are likely to be the main challenge.

“Even where businesses sustain no direct damage, they are likely to be affected by power cuts or damage to infrastructure,” Dr Linnenluecke said.

“With companies increasingly reliant on high-tech systems, any outages can result in large-scale disruption.”

In January, the CSIRO released a study showing that Australia’s average temperature is already up 0.9°C and could climb by more than 5°C by the end of the century.

Despite these warnings, this week’s Intergenerational Report has dedicated only a handful of paragraphs to climate change, a dramatic backward step from Labor’s 2010 report which dedicated a whole chapter to the topic.

It is poorer nations, though, that are most exposed to climate risk, particularly those in Africa, which is expected to be hit hardest.

An assemblage of 196 countries will meet in Paris this December for further talks on how to deal with the looming global threat of climate change.