A secret report prepared by immigration detention service provider Transfield Services has been thrust into the public spotlight after it was read into Hansard by Greens Senator Sarah Hanson-Young late last night.

The report is at the heart of a still unfolding drama involving accusations of sexual assault and alleged coaching of self-harm in the Australian backed detention on Nauru, currently being investigated by the Moss Review, which New Matilda understands will be released early next week.

The Transfield document, described by Senator Hanson-Young as an “intelligence report”, reveals the company was monitoring the activities of Save The Children staff, then accused them of providing evidence to the media of sexual assaults and protests in the detention centre.

The report refers to Save The Children staff by pseudonyms.

“Research shows that AB has posted a video taken of a Refugee protest on 26 September 2014, at Anabare Lodge, to his Facebook page on 27 September 2014,” the report records at one point.

“This footage shows the Police attending to a protest at the lodge and removing a protest banner from some children who are protesting with adults in attendance. The video has appeared on a number of refugee advocacy websites and Facebook pages.”

It reveals that Save The Children staff had compiled reports documenting evidence of sexual assault, which it said had become “increasingly emotive in recent weeks”. 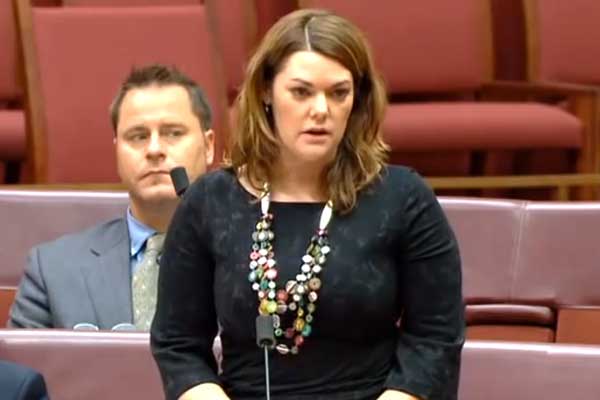 “Two days ago, information report 280917 was written in such a manner by SCA employees, DE and FF, and some of the allegations regarding sexually inappropriate behaviour by security guards contained within this report have been widely reported across Australian media today. DE left Nauru yesterday and the allegations have appeared in the press today.”

Security guards in the detention centre are provided by Wilson Security, which is subcontracted by Transfield. The report does not make it clear how either company responded to the allegations.

The allegations of sexual assault emanating from Nauru have long been in the public realm.

In October 2014 then Minister Scott Morrison acknowledged them and announced the Moss Review would investigate. But during the same announcement, the Minister also drew attention to the Transfield allegations against Save The Children staff, who have consistently denied any wrongdoing.

A report on the same morning in The Daily Telegraph alleged staff had encouraged self-harm, citing an “intelligence report”, apparently the same document Hanson-Young read into Hansard last night.

Despite the Telegraph getting its hands on the report, it was never shown to Save The Children, who were unaware of its details until last night.

As the Telegraph reported, the document does allege refugees were encouraged to commit acts of self-harm.

“It is probable there is a degree of internal and external coaching, and encouragement, to achieve evacuations to Australia through self-harm actions,” it said.

However, that is the only line relating to the allegation, which has long been hurled at refugee advocates, but never been proven. The report does not contain any evidence of this occurring.

“The report simply contains a series of vague allegations without any actual evidence of inappropriate action by any staff member in the centre,” Hanson-Young said last night.

“This report, of course, is the one that the former immigration minister refused to release publicly, but was the reason his department sacked 10 Save the Children employees who were working at the time on Nauru.”

“The minister claimed that this was also the reason he initiated the Moss review. Now that we can see the contents of the intelligence report, the real reason he refused to release it has become clearer: there is no evidence supporting the claims of misconduct.”

The unveiling of the document comes as the Department of Immigration cracks down on Save The Children staff who tried to bring the alleged sexual assaults to public attention.

Earlier in the week Guardian Australia revealed the Department asked the Australian Federal Police to investigate a submission made by Save The Children to the AHRC’s children in detention inquiry.

The submission provided evidence of sexual abuse of child detainees. In response, the Department reportedly asked police to investigate Save The Children for potentially breaching section 70 of the Crimes Act, which bars the disclosure of Commonwealth facts or documents.

New Matilda was unsuccessful in its attempts to gain comment from the Department of Immigration and Transfield Services at the time of press.