The Aboriginal Legal Service NSW/ACT could be forced to close some of its offices and is already losing dedicated staff, as it anticipates $3 million in federal cuts to the already underfunded organisation.

The Abbott government announced in last year’s budget that it was slashing $13.4 million nationally from critically needed Aboriginal legal services around the country, claiming that it will be cut from law and advocacy activities.

It represents a 20 percent cut nationally to Aboriginal Legal Aid, which aims to stem the staggering number of Aboriginal men, women and children who are filling the nation’s jails and juvenile detention centres.

Despite outcry from the peak Aboriginal legal aid body – the National Aboriginal and Torres Strait Islander Legal Services (NATSILS) – its own chief Aboriginal advisor Warren Mundine and widespread community anger, the Commonwealth is planning to forge on with the cuts.

The move has forced the Aboriginal Legal Service NSW/ACT to appeal to the public in a petition urging the government to reverse its cuts.

According to CEO Phil Naden, there’s not much “meat left on the bone”.

“It comes at a time when… one in four adults in adult correctional centres (are Aboriginal) – 26 per cent across New South Wales. And [Aboriginal kids] make up at least 52 per cent of… juvenile detention centres.

“The announcement of these cuts at this specific time is dramatic for our people because it cuts into frontline services. This means the reduction in what we can do as an organisation for those who are most vulnerable within our communities.”

While Indigenous affairs minister Nigel Scullion promised the funding cuts would not affect frontline services, Mr Naden says the organisation has already been forced to look at the possibility of closing down some of its regional offices, which service the most disadvantaged people in the state.

The board has not yet decided on which offices will close, or how many will be shut down, Mr Naden says.

“We’ve got 190 staff and 23 offices around the state. We work on a shoestring budget as it is.

“The impact these cuts will have on us will be the possibility of job losses, office closures, reduction in our service provision around family law and care and protection matters.” 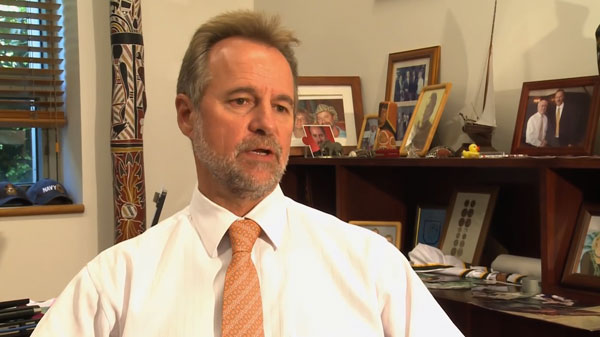 The ALS NSW/ACT has not been funded to provide legal services for civil cases since the 1980s. Its resources are already stretched in representing criminal cases.

But despite this, they have been able to use their resources to provide advice through their Family Law and Care and Protection Unit for Aboriginal families who come into contact with child protection agencies.

The national growth of Aboriginal children in out-of-home care has risen by 65 percent since Kevin Rudd apologised to the Stolen Generations. In NSW alone, 6,000 Aboriginal kids have been taken from their families.

The petition specifically looks at how the cuts to the ALS NSW/ACT will impact the ability of Aboriginal families to access advice on child protection matters.

While the organisation has been unable to represent clients in civil cases since the 1980s due to funding restrictions, it provides advice to Aboriginal families on its limited resources through the Family Law and Care and Protection Unit.

“We’re still underfunded to provide those services. We have a small group of lawyers, field staff and admin who are working specifically on family law and care and protection matters. They are slowly doing outreach to the communities that we service on a criminal law practice, and complimenting that services.

“There’s still the case that we haven’t got the funds to sustain having the people on the ground to deliver that service.”

Mr Naden says this is critical because children who are removed from their families are more likely to end up in jail.

“Not only are we experiencing rates of child removal faster than at any time during the Stolen Generation, we’re also determining a path for so many of these kids which is straight into the criminal justice system.

“ALS frontline services are there for those kids. We operate a care and protection practice that fights to keep children and families together. We run a family law practice that works with families and the best interests of the child.

“We run a criminal law practice that helps divert young people from the juvenile justice system and adults from entering prison.

“If the ALS is cut, more kids will be taken away and more of those kids will end up in detention and then prison.”

Meanwhile, the ALS has already had to cut its successful Prison ThroughCare program, a frontline service that ceased operation last year. It provided assistance to Aboriginal people leaving prison.

Mr Naden says since the closure of the program, community members have expressed concern there is no other services in place to assist adjusting to life after prison.

“I do hear frequently from our people in custody that when they come out, they have no-one to assist them,” he says.

The successful Custody Notification Service (CNS), a recommendation of the royal commission, is also endangered under the proposed funding cuts.

The CNS is a hotline which connects Aboriginal people with an ALS lawyer when they are first taken into custody. Since it was introduced, NSW has not had an Aboriginal death in custody, the ALS says.

The CNS was cut two years ago, after both the Commonwealth and the state government refused to fund it. The ALS NSW/ACT launched a successful social media campaign which resulted in the federal government committing to a further two-years funding.

The ALS NSW/ACT are hoping for a similar result on the latest round of cuts.

“We’ve got to remain as optimistic as we can. Things obviously won’t be getting any clearer for us until we receive positive feedback from government until the May budget,” he says.

But in the midst of funding uncertainty, the ALS is already feeling the impacts of the cuts.

“The morale of the staff has dropped, we’re obviously losing staff to other organisations because of the uncertainty in our funding.

“The other thing is, the community are up in arms in relation to what service provisions are going to be cut.

“We can’t just target one community and close one office. We have to think across the board and the impact it is going to have on our Aboriginal communities across NSW and the ACT.