“I rate it as the best board for the best road project in Australia," gushed NSW Roads Minister Duncan Gay of his own handiwork to the Sydney Morning Herald in November 2013.

He was talking of the board for the Westconnex, a $12 billion 33-kilometre loop of motorways, tunnels and tolls that will link Parramatta in Sydney's west with the suburbs in the inner west and back out to south western Sydney.

For months now, thousands of NSW residents have been protesting against the Westconnex , which was first announced by then LNP Premier Barry O'Farrell in 2012, without any community consultation.

Like the East West link in Victoria, the NSW government's reliance on tollways as a solution for Sydney's congestion crisis is now a state election issue, especially in Sydney's inner western suburbs – a cluster of seats that will be hotly contested between Labor, that supports a version of the Westconnex, and the Greens, who oppose it.

I've been investigating the Westconnex issue since January. As part of my research, I flicked to Gay's pride and joy, the Westconnex Development Authority (WDA) Board. The first thing I noticed is that all its members are white men in suits, most of whom look over 50.

Who are these men responsible for the contracts, funding, operation and environmental assessments of Westconnex? I decided to look more closely at the Board, starting with its Chair, Tony Shepherd. Gay especially singled out Shepherd’s appointment as a 'coup for NSW'.

Shepherd has devoted much of his career to developing the role of private business in building and owning infrastructure. In the course of my research, I read court reports about his alleged role in ‘pushing’ traffic figures when, as a senior executive of Transfield Holdings, he ran a consortium bidding for the Lane Cove Tunnel, which later failed.

As I often do these days, I sent out a tweet drawing attention to his role in the figures. It attracted two or three retweets.

As the SMH reported yesterday, last Monday, I received a letter from Ash St, who act on behalf of Shepherd. I was given 24 hours to apologise and issue a correction, published by tweet and prominent notices paid for by me in three Fairfax publications.

I replied that I would seek advice. Shepherd's lawyers then gave me several more days.

On Friday, I told them I would not comply with their demands and asked them to send me any evidence or denials that countered the court report. I stated that I would include relevant information in future reports. I have not received any further information. I have how received another letter complaining about the ‘leak’ of the lawyers’ letter to the SMH and discussion of the matter on twitter.

There's nothing like a defamation threat to focus a journalist' mind so I dug into Shepherd's background further.

In recent times, Shepherd is best known for his role in chairing the Abbott government's Commission of Audit report, which recommended a Medicare co-payment, charging for public hospitals, increased co-payments for pharmaceuticals, raising the pension age, cutting wage subsidies for the long-term unemployed, cutting unemployment, sickness and widows' benefits for those aged over 60, reducing funding for affordable housing and homelessness and abolishing public vocational education programs.

Between 2011 and 2014, Shepherd was also president of the powerful lobby, the Business Council of Australia) which advocates for the 100 biggest companies in Australia. In his last months at the BCA, he was a vocal critic of what he described as 'heavy-handed' policy initiatives by the Gillard government. 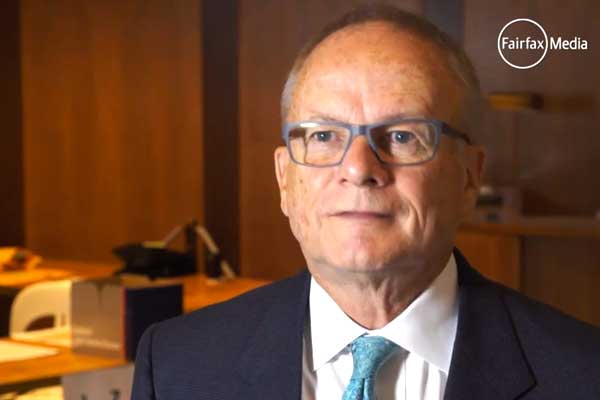 Shepherd is a director of Virgin International and an advisor to the Bank Tokyo-Mitsubishi UFJ Ltd.

When they signed up for their Commission of Audit gigs, Shepherd and his four fellow audit commissioners were allowed to sign confidential declarations outlining potential conflicts of interest.

Shepherd began his life in the public service but in 1978, he joined Transfield Services. He told the SMH last year, “It was just great. I pulled them into two things: defence, because I had a defence background. And into the PPP [public private partnership]market. My first big project was the Sydney Harbour Tunnel.”

He rose to be a director of Transfield Services in 2001, becoming Board Chairman in 2005. He finally quit the construction and services giant in October 2013.

According to company documents, Shepherd declared more than 200,000 Transfield shares, allocated to HSBC as custodian on behalf of Shepherd Fund Pty Ltd, the corporate trustee of Shepherd Family Superannuation Fund. His salary in his final year as Chairman was $380,000.

Shepherd has built a career on building and pushing for more toll roads. He was an inaugural director of major motorway player, Transurban and has been involved in the Sydney Harbour Tunnel, Lane Cove Tunnel, the $2 billion Melbourne City Link Project, the Brisbane Airport Rail Link, and Yarra Trams.

He has also been involved in property developments such as the $650 million development at Walsh Bay. He is a strong proponent of privatisation and was involved in Transfield's purchase of Australian Defence Industries from the federal government in 1999.

Like many leading businessmen he also does his bit for male sport. He's Chairman of the Greater Western Sydney Giants and Deputy Chair of the Sydney Cricket Ground Trust.

Shepherd, at 70, told the SMH last year that he is motivated by action.

But some questioned whether his continuing business interests were completely in order when he was appointed to the Commission of Audit. At the time he took on the chairing the Commission of Audit, he had agreed to become a director at the newly-formed Rearden Capital, set up to market infrastructure debt financing to superannuation funds.

Ex-NSW Liberal Premier Nick Greiner was also reported to be involved in Reardon. It was Greiner who advised Premier Barry O’Farrell to go ahead with Westconnex.

ALP senator Sam Dastyari raised concerns about the potential conflict, as Rearden Capital would be a direct beneficiary if more assets were privatised.

Shepherd described the potential conflict as “a very long bow”.

“Look, [chief executive of Rearden]Vaughan Busby is an old mate of mine and he asked me to be a director,” he said. “It’s very much a baby outfit in its infancy. It's not like Rearden Capital is sitting there with billions to invest.

"Anyway, there's not very much left in terms of Commonwealth-owned infrastructure… I cannot see a conflict arising in my term."

Shepherd said his interest had been declared to the Finance Department. Treasurer Joe Hockey rejected the claim that Mr Shepherd had a conflict of interest.

Shepherd criticised the Gillard government for its lack of consultation in its promises to protect labour conditions. He was concerned about its lack of understanding of private interests.

Now those of us who are critical of the WDA wonder about whether Shepherd has sufficient understanding of public interests to play such a powerful role in providing infrastructure for the future.

On Monday night at Enmore Theatre, the WDA held an information evening, four months after they moved on acquiring 40 homes in St Peters and eight months after secretly acquiring other land in the area, where it wants to build a massive Westconnex interchange.

Drills and surveyors are already working in the neighbourhood, and an Environmental Impact Statement has not even begun.

If you want a tollroad, Shepherd may well be your man. But a person who has devoted his life to making money out of privatising public services may not have a firm grasp on the interests of those who rely on inadequate public transport, or sit for hours in cars because there is no easier way to get across the city.

* Wendy Bacon has lived in the Inner West of Sydney for 40 years. She has attended Westconnex Action Rallies and is supporting the Greens in the NSW election.