There has a lot been said in 2015 about freedom of speech. In the wake of the Hedbo massacre in Paris pundits and politicians have been hailing it as a central value of democracy.

Never one to pass up on the opportunity to breathe life into his faltering ratings in the opinion polls, Tony Abbott stepped up with vigour. Condemned were the ‘Islamists’ for their hatred of democratic freedom.

Even more recently, after bullets were showered over a Copenhagen café hosting satirical cartoonist Lars Vilks, Abbott was on the front foot proclaiming that “the Copenhagen attack is an affront to one of our most fundamental values – freedom of speech”.

Abbot is clearly making a distinction between who he sees as the ‘us’ and the ‘them’. When he speaks of ‘our’ values it is quite clear who is included and excluded by this possessive pronoun.

When Stephen Hicks shot and killed three Muslim students in the United States earlier this month, Abbott was not rushing to the press gallery to condemn terrorism. He was silent.

The freedom Abbott speaks of appears only to be one that is to be directed against terrorists who he can associate with Islam. Terrorism in Africa and Pakistan is off Abbott’s radar. So is the Islamic condemnation of what he refers to with rhetorical flourish as the ‘Islamic State death cult’.

Did someone say racism? Abbott stands up proud and righteous when condemning Islamic terrorists, but there is no comment when it comes to white terrorists. It seems that the freedom of speech that Abbott himself exercises is most selective. It is reserved for defending Western victims against non-western terrorists. 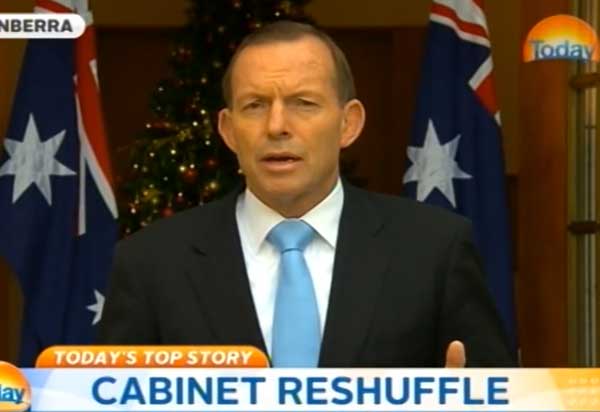 The freedom of speech that is so central to democracy is not just about people being able to say whatever they want. Fundamentally it is about the freedom to speak out against power. This is a freedom that resists religious and political dogma by asserting the fundamental democratic ‘right to critique’.

The right to critique means we do not have to accept the injunctions of authority and are free to question and oppose them. This is a right that sets out to limit political power by always accepting that the people can speak out against it.

The right to critique is not selective. For democracy it applies universally. Not so it seems for the present Australian government, who are well known for trying to quash any dissent that isn’t issued by them.

Recent criticism of the effects of the ‘stop the boats’ policy on children in detention by the Human Rights Commission was slammed by Abbot. He suggested that those who had spoken out of the issues of physical and sexual abuse of children should be ashamed of themselves.

Freedom of speech? Criticizing this government is just not to be tolerated.

Where is freedom of speech when Abbott went on record saying that it was a ‘sacking offence’ for anyone in his office to background against MPs. No talk of freedom either when public broadcasters ABC and SBS suffered funding cuts. Criticism over Abbot’s ‘captain’s call’ to knight Prince Phillip were dismissed. “Electronic graffiti,” he called it.

So whose free speech should the government listen to? In response to criticisms over Prince Philip’s knighthood, Coalition MP Michael McCormack spoke up from the backbenches urging Abbott not to worry about “texting, latte-sipping, keyboard warriors who frequent the tapas bars of Sydney and Melbourne”. Criticisms levelled by “tea-leaf reading groups” who busy themselves on Twitter are also to be shunned.

McCormack advised Abbott to hurry along to the Royal Hotel in Grong Grong. It would be there, in a Riverina farming village far from the city life, that Abbott could get his hands on the opinion of real Australia.

This claim to the location of the real public voice reflects a deeply discriminatory and exclusionary politics. The ‘latte’ McCormack refers to is, of course, a drink that was brought to Australia by immigrants, welcomed by a country still beholden to the White Australia policy.

There’s none of that in the Royal Hotel, which opened in 1875 in Grong Grong. A town where nine in every 10 people were born in Australia, and Christianity is by far the majority religion. If anything, the demographic of Grong Grong is not so far from that of Abbott’s cabinet. This is an image of Australia that does not reflect who its ‘public’ really are.

Of course, the opinion of people in Grong Grong matters, but it does not matter more than anyone else’s opinion. A government which only listens to those who it sees in its own white image, and which selectively condemns terrorism when it is committed against the west, is not a government that believes in democracy.

As far as this government is concerned, in today’s Australia, free speech and the right to critique are unequally distributed along racial or religious lines.

* Carl Rhodes is a Professor of Management and Organization Studies, within the Department of Marketing and Management at the Macquarie University, Sydney.