Gillian Triggs has done it again. Her report, The Forgotten Children, detailing the psychological damage caused to children in detention, has unleashed yet another wave of hurt among Federal Coalition MPs. I for one think its time something is done to stop this woman from menacing these clearly vulnerable men.

Tony Abbott could not contain himself, calling it a “stitch up”. He suggested the Commission should write a report praising Scott Morrison for stopping the boats.  Andrew Nikolic MP (whoever he is) has insisted she resign.

George Christensen has asked for a Parliamentary inquiry into whether the Human Rights Commission is systematically biased against the Coalition. It is, of course, unnecessary for the inquiry to investigate if the Coalition is systematically biased against human rights. They support many rights such as Andrew Bolt’s right to free speech. They believe, to misattribute Voltaire: that you must defend to the death somebody’s right to say something especially when you believe in what they say.

A word about the report, it is 324 pages. It is the second report by Gillian Triggs excoriating the Coalition for “not caring about human rights”. I don’t like to use the c-word but when you combine the size, the title, and the online publication there is only one conclusion. Gillian Triggs is a cyberbully, (who had the hide to release the paper on Safer Internet Day).

Something must be done. How can a country function properly when its Human Rights Commission is publishing non-binding reports so at odds with Government policy? Our MPs are clearly sensitive men who cannot afford to be distracted from their important business such as: coming up with a GP co-payment that the Australian people will never notice, finding a way to calculate forward estimates so that $56 billion in deficit turns into a surplus, and undermining Tony Abbott.

So, what should be done? First, the Commission should take a lesson from the classroom. In modern classrooms we do not criticize. Instead we praise a child’s work before offering suggestions as to how she might improve. The Commission’s report would have been far better received if it were entitled “The Glory of Stopping the Boats: Pictures of Children the Honorable Scott Morrison freed from detention!” with a footnote detailing “areas for improvement”.

Second, the Commission needs to stop focusing on “complaints” and start offering commendations for the great work the Coalition does on human rights. 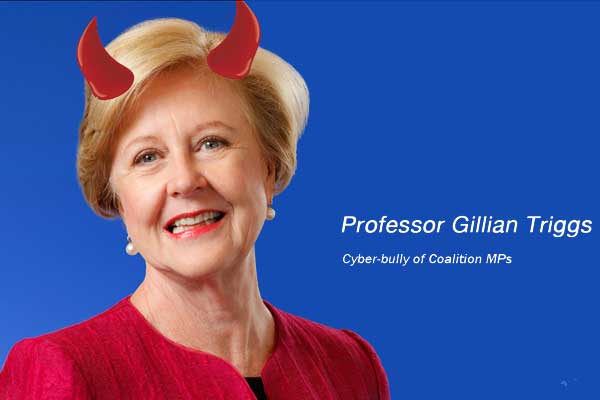 For example, like securing the freedom of everyday Australians from the wicked carbon tax. Repealing the carbon tax makes life better for EVERYONE. Tony Abbott has made life 0.002 per cent per annum easier for all oppressed people: Indigenous Australians, refugees, LGBTI, women, and the disabled. The only oppressed person’s life who has been made harder is Joe Hockey, who is looking for $7 billion (and counting) to replace the tax.

Joe will be fine, after all, good government started this week.

Instead of trashing her reputation by engaging in a bullying campaign, one statutory required non-binding report at a time, Ms Triggs should show a little bit of positivity and kindness. Should she adopt this approach her contract in 2017 may not only be renewed, but she could be knighted for service to human rights of everyone, especially Coalition MPs.