The final stages of a two-and-a-half year long battle to save the Leard State Forest is playing out this week with the six-bay ‘Bat Attack’ protest festival underway.

The festival, organised by Front Line Action on Coal, began Friday 13 and marked the beginning of the clearing of the Leard State forest on Sunday.

Front Line Action on Coal (FLAC) established Australia’s first ever blockade of a coal mine in August 2012 and has coordinated resistance to two mega mines being constructed in the forest by Whitehaven Coal and Idemitsu Resources.

It’s a movement that has led to the arrest of over 300 activists determined to stop the destruction of the Leard, which is the largest and most intact stands of the critically endangered Box-Gum Grassy Woodland.

Box-Gum Grassy Woodland has been reduced to 0.1 per cent of its original extent nationally, and just 0.05 per cent in NSW.

The forest is located in the north west of NSW near Narrabri and provides habitat for 30 threatened, and three critically endangered, animal species.

There are also sacred First Nations burial sites in the forest, and the Gomeroi traditional custodians have fought a long and agonising battle to gain access to these and other sites.

This week’s ‘festivities’ are the culmination of the years of resistance that has included non-violent direct action protests, multiple legal challenges, the Gomeroi’s fight for access to their sites and local farmer’s efforts to at least have the mine pits filled in when Whitehaven and Idemitsu finish mining. The resistance continued on Sunday, with seven people ‘locking on’ to bulldozers in the early morning as they prepared to start clearing the forest.

Their efforts stalled clearing for around six hours, but ultimately, it appears, the bulldozers will continue to roll.

Whitehaven now has a 10-week period, until the end of April, to clear the forest. The company is only permitted to clear a portion of the forest this time around, but its future is increasingly uncertain.

Despite this seemingly grim reality, protestors haven’t given up hope. It’s a philosophy that has characterised the diverse social movement, and attracted thousands of people to the FLAC blockade camp.

Those defending the forest have already delayed clearing once, managing to cut short Whitehaven’s ‘Winter clearing’ plans in June last year. Dozens of protestors engaged in arrestable actions by taking to the trees to physically prevent clearing, or hindering mining machinery to slow operations.

The protestors, and a range of scientific and political figures, were concerned that Whitehaven had been given the go ahead to clear during a time when many species were in a vulnerable state of semi-hibernation.

Their actions bought time for the Maules Creek Community Council (MCCC) – a local farmers’ opposition group that had advocated an underground mine instead of the now approved open-cuts – to launch a challenge in the Land and Environment Court.

The MCCC argued that secretive last minute changes to Whitehaven’s approved clearing window, which allowed for clearing over the Winter months, had not been subject to adequate consultation and were outside industry standards.

At the eleventh hour, just as an injunction was expected to be handed down, Whitehaven made a ‘voluntary undertaking’ not to clear any further land until the dispute had been settled. 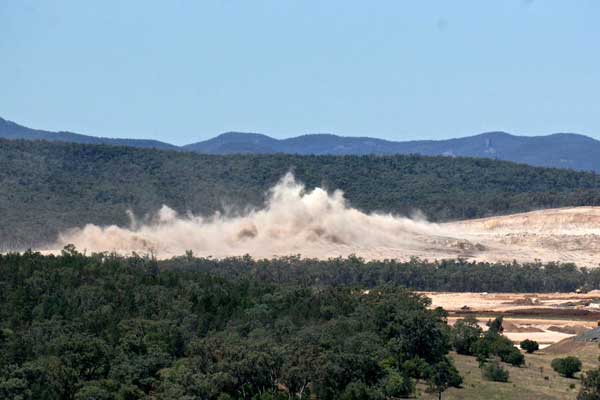 After another subsequent hearing the mining giant submitted new plans that only allowed for clearing between February 15 and April 30, a win for the MCCC which removed the utility of the case.

But it was the seeming futility of the campaign that weighed on many advocates’ minds last Sunday as the bulldozers were once again temporarily frustrated.

Around 150 protestors walked in a ‘funeral procession’ between the main entrance to Whitehaven Coal’s Maules Creek Mine and Idemitsu Resources’ Boggabri Mine.

Bearing a large effigy of the Grim Reaper, protestors approached the gate to Boggabri mine chanting “you ‘aint taking nothing from this land, been here forever and here we’ll stand”.

The demonstrators then observed a minute’s silence for the destruction of part of the forest, but the fight, organisers said, is far from over.

“We’re not giving up on the forest, we’ve said that before, and I’ll say it again,” Ros Druce, a local who’s been heavily involved in the campaign, told the demonstrators.

A founding member of the FLAC blockade, Murray Drechsler, explained that the camp has faced similar challenges before.

The original camp in the forest itself was shut down by Forestry Corporation and the Police, and the protestors were forced to relocate to Cliff Wallace’s nearby farm and establish ‘Camp Wando’.

“I was gutted, it was pretty devastating,” Drechsler said.

“But with a good crew we moved everything in one day, and two days later we did an action and locked on to something, just to prove we had moved but we hadn’t gone anywhere.

“And the movement has grown bigger and stronger to something quite large in the past year, and now council, as you’ve all heard have probably moved us on from camp Wando, which is why we’re now at Steve’s for Bat Attack.”

They’re sentiments that ring true to Gomeroi traditional custodians, too. Yesterday elders and community were set to enter the mine site within the forest to perform ceremony at a sacred burial site.

But in the words of one Gomeroi man, they “got the boot” and were not permitted to access the burial ground, despite no Gomeroi ever having been arrested for protesting at the Leard.

They emerged from Whitehaven’s mine site in the high-vis clothing and hard hats the company had insisted they wear, and performed a smoking ceremony with a group of activists who had been holding a silent vigil across the road in a show visual of support.

“You’re all our brothers and sisters now, and I declare that,” uncle Neville Sampson said after the ceremony.

New Matilda understands that further protests, both legal and arrestable, will continue into the future, but as we revealed earlier this year, the shaky economic underpinnings of the Maules Creek Mine may play an equally large part in whether the Leard Forest is ultimately mined.

* New Matilda’s environment reporter Thom Mitchell is writing from the ‘Bat Attack’ festival, which has also featured nightly performances, skill-shares and workshops, and we’ll be covering events as they unfold.