A 23-year-old student who was pepper sprayed at a student rally says police used “completely excessive force” and that it should have been clear to the officer involved that she had a disability.

Anna Amelia, who is enrolled in a Bachelor of International Relations and Development Studies at the University of New South Wales arrived at the protest just after 10am.

Legally blind, Amelia has “very limited vision”, and was walking with the assistance of a cane at the protest.

“It was fairly calm, there were people chanting and we had some banners,” Amelia told New Matilda.

But when students tried to enter the building, police reacted swiftly.

“We went into the lobby to follow Christopher Pyne in, to make some noise and get his attention and the police totally over-reacted and sprayed me in the face with capsicum spray,” Amelia said.

“It got me in the eyes, my nose, my mouth, I inhaled a whole lot of it which made it almost impossible to breath.”

Amelia said she hadn’t been aware of the location of the police until she was sprayed, causing her to flee and eventually collapse outside.

“I didn’t know what was going on until I was sprayed,” she said.

“I sort of fell on the pavement and people tried to get the spray off me but I ended up being treated by a paramedic. Video of the incident shows police spraying the crowd seemingly at random.

In a media release issued this evening, NSW police said the students were sprayed for their own protection.

“It’s alleged the protestors blocked the driveway to the building's underground car park, along with the entrance on Castlereagh Street,” the release stated.

“Police further allege a number of the protestors entered the building at that location. They attempted to push through a single door, posing a safety risk to both police and the protestors.”

“The protestors allegedly failed to comply with police instructions to move back.
As further protestors were forcing their way into the foyer area, police – concerned a crowd-crush situation was imminent – deployed OC spray.”

The statement confirmed no arrests were made.

Another student who was pepper sprayed, Brigitte Garozzo, told New Matilda she had tried to avoid any confrontations with police after seeing heavy-handed reactions at previous demonstrations.

“It’s like excruciatingly painful, I’ve never felt anything so painful in my life. I was on the ground, I couldn’t see anything,” she said.

The protest took place at the Masonic Centre in Sydney, where Education Minister Christopher Pyne was due to speak.

Pyne’s efforts to uncap the price of university degrees, cut funding to public universities, and open a new pool of funds to ‘for profit’ higher education providers inspired a wave of student protests last year.

The initial Bill was defeated by a narrow margin in the Senate, but will now come before parliament for a second time. 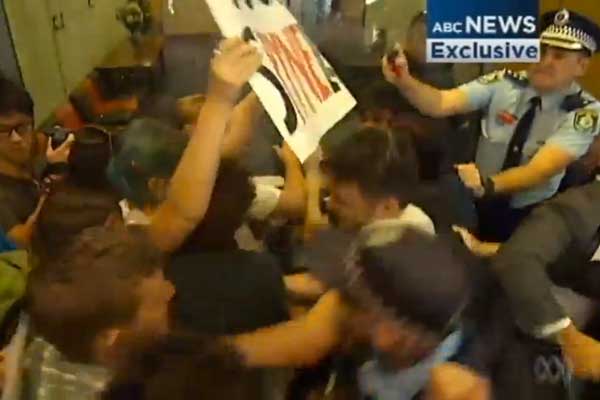 Amelia said she believed the legislation would deter less privileged students from enrolling in higher education.

“If it goes through parliament it will disproportionately harm women, Indigenous people, and people from low SES backgrounds,” she said.

“I think it’s important that we show the police we’re not afraid to protest, living in a democracy.”