As a journalist brevity and truth were his by-word. So it’s no surprise that Brian Johnstone became widely known simply as BJ.

Brain Johnstone is a legend. And not because I always thought he looked, in his slightly rounded glasses and with his accent, and love of his guitars and music, a lot like John Lennon.

Which I still think he does.

He was, in my view, one of the most outstanding political strategists and advisors of our time.

Even those who worked on opposite sides to him, who went for his throat and guts, as they did. They did so fundamentally, out of respect and out of fear of his formidable skills and brilliant mind. And out of fear he was coming for them. And he was.

He was a fearless and fearful opponent, and an unconquerable warrior in the causes he fought.

He has done so many things extraordinarily well, whether reporting on the Lindy Chamberlain case, his roles in mainstream Federal and NT politics and in his writing generally, as his Walkley and Human Rights awards show.

They speak to the quality of his journalism, the mind at work behind the writing, but above all to his search for truth and the underlying strong sense of justice and right – that underpinned all that he did.

So too, did his work with the late Bob Collins as both Opposition Leader and as a NT Senator and Minister in the Federal Labour governments of the 1980’s and 1990’s.

They were a formidable pair, the affable, expansive Collins, the abrasive, inexhaustible hard-nosed adviser and strategist BJ.

Already a respected, experienced journalist with the Adelaide News, later with AAP, it was in the years of political cut and thrust with Bob Collins where he honed his political skills.

It was in Darwin in 1983, that I met BJ and his wife Geri, first as political colleagues, since then, in a friendship of 32 years.

My first impression was “intimidating”. BJ could be very intimidating and abrasive.

He was also impressive. A brilliant political strategist and media adviser, at the top of his art and craft.

What I grew to know, was the warm compassionate man, the person, the friend, that we all know, as well as the political warrior.

He was incredibly charming, interesting, a great story teller and conversationalist. Good to be around. He could also be abrasive, hectoring, and unrelenting.

Yet as warm and firm a friend, that one could ask for. Someone you were drawn to by the force of his personality. But also by his underlying gentleness and human warmth, once you got to know him.

But as important and brilliant this period in Darwin was, in his life and his career, it is in the field of Aboriginal Affairs that BJ has left his greatest mark and impact.

I came to see more of both those sides to him, close up, in the years that BJ was the Director of Public Affairs at ATSIC from 1998-2002.

At times in the halcyon days of ATSIC, in the period around 1999 to 2000 and 2001, ATSIC was at its apogee of political influence under BJ’s direction.

It was a great time and a special feeling working there, with BJ. Those bonds remain strong to this day.

I’m sure that those of you here today from ATSIC, will know what I mean. So too will those from the ALP, from the Northern Territory, from NSW Aboriginal Land Council, the National Indigenous Times, and journalists who worked closely with him.

In person, he was inspiring to work with and to be around: An incredible memory – like a steel trap – for detail, of conversations, of where to look and for what. And the quickest mind.

With rapier quick analysis, devastatingly cutting in delivery and cut through. And like his writing, to the point, and invariably spot on.

Most of all, he was at his best in a crisis. Cool and calm, he had an amazing sense of humour, and irony, under fire. There was no better man to have at your side in a crisis.

These memories and images of BJ remain strong and clear.

So too does the time in 2002, when the Howard government was scheming to abolish ATSIC.

The very first target of their strategy, was Brian Johnstone. Might I say for the record, falsely manufacturing a trivial case for his removal.

And he was removed. While it was personally a very difficult time for him and his family, he was not stopped, he would not, could not, be silenced.

In both these organisations, he was masterful, giving these two vulnerable, but important Indigenous organisations, ATSIC and NSWALC, a chance at political survival.

It was Brian Johnstone who provided the political and strategic where-with-all they needed, to be able to survive long enough and well enough, to make the hard fought and hard won gains for Aboriginal and Torres Strait Islander people in this country.

On a day-to-day basis, for the past 17 years, BJ gave his all to give Aboriginal and Torres Strait Islander people a voice that could be heard in this country.

This period of nearly two decades is the pinnacle of his achievements and, other than his kids, partner, family and his friendship, his greatest legacy.

No one man, no man, in this time has done more than Brian Johnstone to make that voice heard. Yes, there were many Indigenous voices in these organisations that got heard in this time.

But behind them, crafting the strategy, the message, the details, and often the policy, was the formidable Brian Johnstone.

The other half of his legacy is his writing on Aboriginal Affairs in this country. In the National Indigenous Times, more recently in the Tracker magazine, and since then, in the New Matilda.

Since the abolition of ATSIC, irrespective of the failings of that organisation, it is a fact that that the Indigenous voice of this country is far less seen, heard or reported on.

As a journalist, he did all he could to lift the standards and change the focus of that coverage. Pointing the way with un-matched analysis and knowledge.

He wrote stories that no other journalists would or could write, and told the story of the story behind the story.

His Box Seat column was compulsory reading for anyone wanting to know what was really going on in Aboriginal Affairs in this country. 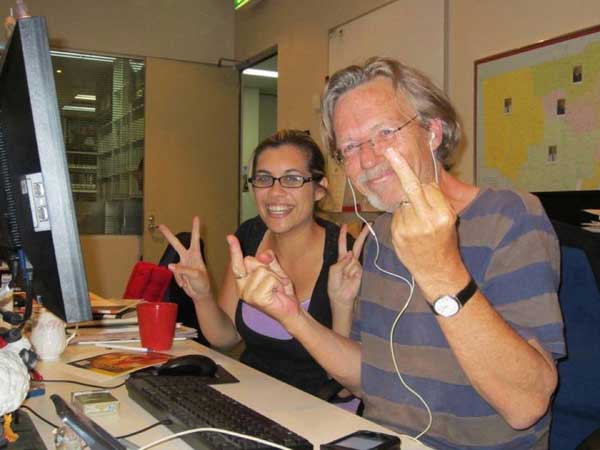 Unfortunately, there will now be silence from where he sat and wrote.

This is a great loss, for us all. But particularly, for Aboriginal and Torres Strait Islander Australia, and those who care about these issues.

We have lost one of the single greatest sources of inside and first-hand knowledge and understanding, of Aboriginal affairs in this country, of the last quarter of a century.

BJ had, in his extraordinary memory, details of conversations, meetings, decisions – and records and documents – which would have made the most definitive book yet to be written. About what happened to and in ATSIC, and why. And an encyclopaedic insight, the Box Seat view if you like, into the intricate layers and players in Aboriginal Affairs of the last 25 years or so.

He was uniquely placed, to tell that labyrinthine, sweeping story, fully. Like no other.

I was going to end by saying that the world and all BJ fought for, and stood for, will be the lesser for his passing. But that is not right.

Because, of all these things BJ stood for all his life. He will not give up or stop in the afterlife.

Just like he had not ever, given up, even to the very last, here with us.

This world will surely be the better for that.

We have been fortunate to have lived even our small part, under Brian Johnstone’s sun. Such a man was this man.

To Geri, to his children, to his mother and brothers, we feel your loss and grief. There is no loss greater than yours.

This room is full of those he stood by. And many, many more elsewhere are today also feeling his passing.

We are sad but proud to be here to stand with you and honour him.