The growing fossil fuel divestment movement came out in full force yesterday, staging events across 50 countries and six continents, and rallying tens of thousands of people to call on institutions to divest from the top 200 fossil fuel companies.

This ‘national day of action’, organised by groups like 350 Australia, Greenpeace, GetUp and the Australian Youth Climate Council, enters its second day today, but organisers say that ordinary people and powerful institutions are putting their money where their mouth is every day.

“Divestment is basically the opposite of investment,” Nikola Casule, a Climate and Energy Campaigner at Greenpeace told New Matilda at a rally in Sydney on yesterday.

“It’s taking your money out of an organisation that’s doing something you don’t like so that it’s spent in a way that does match your values,” he said.

According to environment group 350 Australia, since the Australian divestment campaign began less than 18 months ago, around 3,000 individuals have closed their accounts with the big four banks and moved more than $400 million worth of loans and deposits to banks that don’t lend to fossil fuels.

“Household investors have pledged to move a further $300 million if the banks fail to divest,” a 350 Australia spokesperson said. 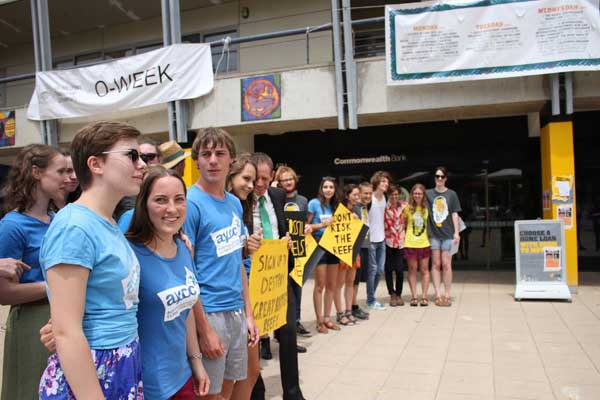 One of those banks, the Commonwealth, was targeted by more than 500 people during the rally, who descended on the bank’s Sydney headquarters to demand it does not help finance a huge expansion of Queensland’s coal industry proposed for the Galilee Basin.

The Basin is one of the world’s largest coal reserves and would commit Australia to a long-term future of high emissions. One of the proposed mines, the Carmichael open-cut, would produce four times the carbon emissions of New Zealand in its own right.

Divestment advocates say strong global support for the movement, which has reportedly been endorsed by groups and individuals that control $50 billion in assets, is an expression of peoples’ frustration at the underwhelming global response to climate change.

Protestors came from all over the country to call on the Commonwealth Bank not to exacerbate the global climate challenge, with a number of disgruntled customers even divesting in person at the bank’s Darling Harbour headquarters.

These (former) customers said it was unconscionable to allow their money to finance the huge mines proposed for the Galilee.

Many were particularly concerned about the damage that would be done by the hundreds of millions of tonnes of coal set to be shipped through the Great Barrier Reef.

Protestors serenaded Commonwealth Bank employees, many of whom reportedly took a break to watch the show from above, as demonstrators sang “stop, in the name of love, before you break the reef”.

The Commonwealth Bank was targeted because it is seen as the most likely backer for projects in the Galilee Basin, but all of the big four have refused to rule out funding new developments in the Basin.

Most of the protestors who decided to “break up with their bank” were members of the Australian Youth Climate Council (AYCC) who had travelled to Sydney for the organisation’s national summit.

Over the last two years, AYCC representatives have met personally with the CEOs of the big four and 450 bank managers around the nation, and members hope the decision to “break up with the bank” will send a strong signal of their frustration at the banks’ refusal to rule out financing new developments in the Galilee.

The organisation has grown to more than 110, 000 members since its inception in 2006, and has also attracted some big-name backers, including the nation’s leading voice on climate change, Professor Tim Flannery. Addressing the summit at the University of Technology, Professor Flannery said he was proud to be with AYCC members.

“You people who do things like the Commonwealth Bank action, you’re heroes,” he said.

“You’re certainly heroes in my eyes, and I’m so grateful to have a chance to be here to talk with you.

“You’ve probably heard the Prime Minister or someone else talking about Australians leading the world in terms of dealing with climate change under the previous Labor government,” he said.

“As much as we did some great things, it’s not true that we’re leading the world.

“There’s a lot of countries around the world now putting a price on carbon – we’re the only country that’s taken a price off carbon.

“So we are leading, but we’re leading in the wrong direction now.”

Professor Flannery said that under the carbon tax, the amount of coal Australia burnt slumped to 69 per cent, but that coal usage had “rebounded instantly” to 76 per cent after the abolition of the scheme.

Professor Flannery said Australia “needs to alter our trajectory pretty fundamentally” to avoid dangerous temperature increases of two degrees, but his overall message was one of hope.

“Collectively when we all start heading the same direction it all starts to add up,” he said.

“Governments are a reflection of the popular will, at least I hope they are in a democracy, and industry has to take care of its customers. So it starts with us,” Professor Flannery said.

Organisers of global divestment day say people-powered moves to address climate change are already well and truly underway, especially in Australia, which has played a leading role in the divestment movement.

“It says a lot about why people here [in Australia]are maybe more active, more frustrated, because they’re not being listened to and practical steps aren’t being taken,” 350 Australia’s CEO Blair Palese told New Matilda.

“I think you’re seeing people so concerned and frustrated about it that they’ll take great steps and put in money and time to do something positive.”

Another national day of action event will be held at 11am in Melbourne’s Alexandra Gardens today.