There are two ways to balance a government budget. One is to rein in spending; the other is to raise revenue.

To listen to the Treasurer (if anyone still bothers listening to him), one would believe cutting spending is the only way.

In fact, one of the Coalition’s first actions on coming to office was to abolish a number of revenue-raising measures, most notably the previous government’s modest carbon tax. Cutting taxes is a strange policy for a government facing a ‘budget emergency’.

There was no budget emergency, but once a government has gone into deficit in response to an economic downturn – normal counter-cyclical economic management – it needs a plan to close the budgetary gap, or at least to be able to service whatever level of debt has been accumulated.

As many New Matilda contributors have pointed out, there is no case for cutting government expenditure. We cannot keep on providing health care, education, transport and other government services, and a social security system which allows the least well-off to live with some measure of dignity, while trying to maintain a level of public spending that is almost the lowest among all prosperous countries.

Some of these services can be provided through private means – toll roads, private health insurance, higher student fees – but such mechanisms are almost always more expensive, more wasteful and less equitable than public funding and provision.

And, politically, the public is fed up with ‘small government’ and privatisation. Economists – at least those who aren’t drawing their paychecks from big corporations and industry lobby groups – have been pointing out the pitfalls of privatisation for a long time. And popular opinion aligns with expert opinion: 70 per cent of Australians believe ‘privatisation mainly benefits the corporate sector’ and that ‘prices always increase when services are privatised’, while only around a third believe there are any economic benefits in privatisation.

So spending cuts should be off the table as the now-chastened Abbott Government prepares its next budget. Rather, it should be looking for ways to raise taxes to fund public services and to close the fiscal deficit.

As the graph below shows, Commonwealth taxes have fallen from around 24 per cent of GDP during the Howard-Costello years to around 22 per cent of GDP since the GFC. (State taxation revenue is even worse). 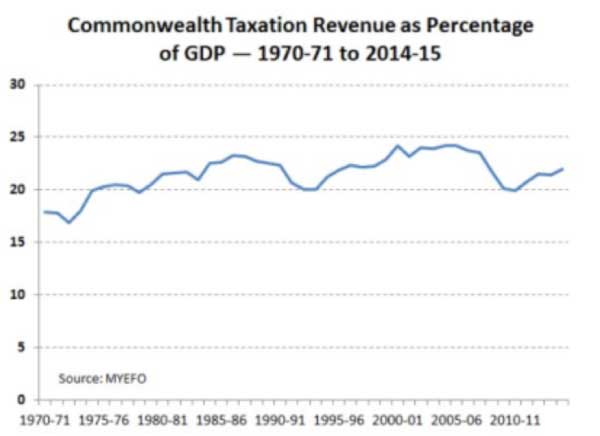 The Government’s Mid Year Economic and Fiscal Outlook estimated that tax revenue would rise back to 23 per cent of GDP by 2017-18, but that projection pre-dated the sharp fall in commodity prices.

More recently The Reserve Bank has downgraded its growth forecasts, and the higher than expected unemployment rate revealed yesterday confirms these pessimistic forecasts.

Normally one would suggest that when an economy is on the brink of a recession, any consideration of tax increases should be off the table, but there are ways to collect more revenue while not dampening economic activity.

First, and most obviously, is the possibility of collecting more tax from foreign corporations and individuals. The Abbott Government has been generous to foreign corporations by abolishing the minerals resource rent tax and by not proceeding with the previous government’s plans to close tax loopholes allowing corporations to shift profits to low-tax jurisdictions. We need the money more than Luxembourg or the Cayman Islands.

Second, there is a case for closing some superannuation tax breaks, estimated to cost $36 billion this year, rising to $49 billion in 2017-18. There are good equity grounds for reducing these concessions, and this would be a good time to make such changes.

Superannuation, by definition, goes into saving, but the world right now is awash with cash seeking investment opportunities. Corporate boards, pessimistic about the market outlook, are reluctant to invest, and are more inclined to return profits as dividends than to retain them to invest in new ventures. That spare cash is doing nothing useful.

Third, and related to the above point, this is a good time to collect more income tax from those with high incomes. There are about 1.4 million Australians with declared taxable incomes above $100,000, including about 0.3 million with incomes above $200,000. While some of these taxpayers may be at a stage of their lives with high needs, most are reasonably comfortable.

Some are putting their spare cash into investor housing, encouraged by generous tax concessions (making houses less affordable for the young), some are putting it into equities, adding to the flow of superannuation funds pushing up share prices, and some are buying expensive foreign travel and imported luxury cars, no doubt stimulating the German economy, but not ours.

Fourth, an economic strategy with a credible plan to increase tax revenue as the economy improves would give governments leeway to raise more debt without losing access to low-cost finance.

The Commonwealth has a AAA credit rating, and should use it. It will retain that rating if those who lend us money believe we will spend it wisely on productive infrastructure (rather than railroads for coal mines that will never be built) and that we will generate the taxes to service our debt (rather than making vague promises about cutting income taxes).

That’s a national version of the process bank lenders use when people seek housing loans – are you investing it in a sound asset, and do you have the means to repay the debt?

We could have a strong program of upgrading our neglected public infrastructure without having to rely on ‘recycling’, ‘leasing’ or other gimmicks.

To stress the point again, as so many New Matilda contributors have done, Australia has low public debt: the weakness on our public balance sheet is on the asset side, not the liability side.

In one of its few economically responsible fiscal moves, the Government has tried to increase excise on liquid fuels, using indexation to raise revenue slowly and predictably – just the sort of tax to apply during tough times. But, demonstrating that the Coalition doesn’t hold a monopoly on economic irresponsibility, Labor and the Greens blocked it in the Senate.

It really is time for a mature public discussion on taxation.