It came as no surprise when the Coalition went on the attack today, with Scott Morrison – not exactly known for his inclination to speak publicly while the portfolio holder – laying into Australian Human Rights Commission President Gillian Triggs after the long-delayed tabling of the Forgotten Children report.

The new minister, Peter Dutton joined in the assault as well.

The release of the report was always going to be accompanied by recrimination. For months the Coalition laid the groundwork, belting the Australian Human Rights Commission publicly and feeding material to The Australian newspaper, which gleefully conspired to trash an independent, public institution.

It was a pre-emptive strike inspired in part by pure malice, and in part by anticipation: they knew the report, which documents the impact of the bipartisan-backed policy of mandatory detention of children – would be devastating.

In a statement tabled in parliament, Attorney-General George Brandis said the government was “disappointed and surprised”. PM Tony Abbott accused the Commission of being partisan and said it “ought to be ashamed of itself.”

But it takes only the most basic interrogation of the Coalition’s attacks to see them stripped back to nothing, leaving just the ugly face of a government that genuinely detests independent critique.

The first accusation – that the report was irrelevant and out of date – was particularly mean-spirited.

The report was handed to the government on November 11, 2014. The Coalition could have tabled it immediately, while the stats were fresh and the observations more recent. But it waited.

It waited until what was almost literally the last minute.

Under the legislation that governs the Commission, the government is given 15 sitting days to table reports once submitted. Yesterday was the 15th sitting day since it received the report, making it, by law, the last day the document could be tabled and opened up to public inspection.

By the time it was finally tabled, at just before 7pm, it was too late for TV news, and the Commission had to hold over their press conference to the next day.

So the Abbott government sat on the report until it was out of date, toyed with the Commission in the final few hours, then lambasted the organisation for a situation it had contrived. 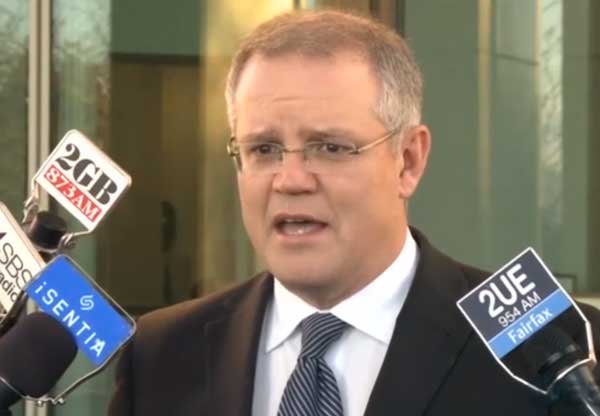 The second attack, the accusations of partisanship, are a little harder to unpack. Triggs doesn’t appear to have any immediate political alliance, and in person presents what strikes as a rigid independence.

The Australian Human Rights Commission does include some hand-picked partisans: Labor installed Tim Soutphommasane, and in 2013 Brandis parachuted the IPA’s Tim Wilson in. No-one could be too surprised if both of these two end up in parliament within the next decade, or if either held a party line on a particular issue.

Clearly, the Coalition don’t have any problem with stacking the Commission, per se.

And going off the report Triggs has compiled, there is no reason to think she has particularly targeted the boys in blue ties.

In fact, despite hitting out at the government today, it is the Labor party that faces the toughest questions as a result of the report. The mass detention of children occurred under Labor’s watch, as did the removal of children to offshore processing.

When the Coalition came to power most of the hard work had been done. They ratcheted up the cruelty, for sure, and have made post-detention life as unbearable as possible for those asylum seekers who do manage to be released. As Minister, Morrison was fluent in the language of sadism, loved to victim blame, militarised the image and language of asylum seeker policy, and had a truly horrific ability to locate opportunity for even the smallest act for cruelty.

Labor tried to release children towards the end of their term, but it was the fundamental policies of mandatory detention and offshore processing that the Coalition eventually continued, and that resulted in this report. Labor gave Morrison all the tools he needed to, basically, live out his political instincts.

The Coalition has been open about embracing cruelty as a form of refugee deterrent, so this report will hardly bother them, as opposed to whoever remains in the ALP but still believes in the humane treatment of asylums seekers.

They will now have to come up with a credible alternative to mandatory detention before they return to power, convince their party it can work, and convince the nation it’s worth a run. Otherwise, they’ll have to silently go along with a policy that has been documented in the clearest terms to pummel asylum seekers into complete psychological distress, and worse.

Reading the report, I kept hearing Kevin Rudd’s promise not to ‘lurch to the right’, a guarantee he smashed on returning to power in 2013. One of the big takeaways is that any tiny, fleeting nostalgia about Rudd as a man of compassion needs to be incinerated immediately.

As journalism lecturer Scott Bridges made light of today, the report doesn’t just implicitly attack Labor’s record, it goes to lengths to name the party throughout.

How dare the Commission ignore the ALP’s role and only attack the Coalition. pic.twitter.com/7uDNCkkMh4

Why is it only the Abbott government that cops criticism? pic.twitter.com/qpJlge0e0N

If Triggs does favour the ALP she did a poor job of promoting their policies in the report. Since the attacks have intensified, the Commission has pointed out it continued to fight for a range of refugee issues during the Labor government, and that it always intended to run a children in detention inquiry on the tenth anniversary of its initial 2004 report.

There’s one final point to make about the report.

While the Coalition have been releasing children from detention, and some improvements have been made to detention centres since the Inquiry began, they are very likely a direct consequence of the Inquiry itself.

There are clear incidents where the Commission picked up wrongdoing in detention, and forced the Department of Immigration and the Coalition to cover themselves, and fix the issue.

Multiple case studies are listed in the report which, including this gem:

“The Inquiry team noticed that new toys were bought on the day of the Inquiry visit to the Darwin detention centres. New X-Boxes were also set up in Melbourne Detention Centre for the Inquiry visit. Children and their parents reported that these had never been used.”

Clearly the inquiry won small victories like these along the way, but the real triumph was the sustained pressure they put on the government to begin releasing people from immigration incarceration.

With Labor have forfeited any pretense of moral high ground, the party stayed silent. This left a gap that only a strong and independent organisation like the Australian Human Rights Commission could fill.

Perhaps the kindness of Scott Morrison and Peter Dutton would have seen them begin to release children without the public pressure. Then again, perhaps not.

The importance of the Forgotten Children report can only be understood fully once the phoney war over which major party is to blame is put – their positions on the issue are different by degree, but share certain core assumptions.

What we need to take from this Inquiry is that it is never acceptable to detain children arbitrarily or indefinitely. It seems ridiculous to type, but it’s that simple.

It’s time for both parties to commit to ensuring all children are released and that this grave sin is never repeated again.