An historic inquiry has warned that the bi-partisan backed policy of detaining all asylum seekers who arrive by boat is to blame for appalling rates of self-harm, family breakdowns, and mental health deterioration among asylum seeker children held in immigration detention centres.

The Australian Human Rights Commission’s ‘Forgotten Children Report’ was tabled just before 7pm on Wednesday night after the government spent the day continually pushing the deadline back, forcing the Commission to reschedule its media launch and leading Greens Senator Sarah Hanson-Young to accuse the government of trying to bury the report.

Given the report’s content, and extensive list of recommendations, it would hardly be surprising if the Coalition were hoping for that result.

The document paints a dire picture of the impact short and long-term detention have on children and families, and warns the harm done during incarceration endures for years after refugees are returned to the community.

In a mammoth undertaking that included interviews with 1,129 children and parents in detention, and canvassed 239 submissions, the Commission found that current detention practices:

• Impede the capacity of mothers to form bonds with their babies
• Disrupt the normal social and emotional development and maturation of children
• Put teenagers at “high risk” of mental illness, emotional distress and self-harming behaviour, while being “causally linked” to self-harm among children detained without parents
• Have caused children as young as 12 to self-harm
• Cause severe strain for asylum seekers with a disability
• Often prevent families gaining access to lawyers and legal advice
• Cause children detained on Nauru to suffer “extreme levels of physical, emotional, psychological and developmental distress”
• Cause moderate to severe mental illness in 30 per cent of adults
• Have ongoing impacts on children after release from detention
• Create a dangerous environment for children, with 33 sexual assaults involving children taking place between January and March 2014

The report makes clear these are not problems that can be fixed by tinkering.

“Despite the best efforts of the Department and its contactors to provide services and support to children in detention,” it says, “it is the fact of detention, particularly the deprivation of liberty and the high numbers of mentally unwell adults, that is causing emotional and developmental disorders amongst children.”

Previous to the report’s release the Commission hosted several rounds of public hearings which heard that Immigration officials had requested a service provider change a report to hide high rates of self-harm, routinely overruled the advice of doctors, and ignored warnings that it was not possible to provide adequate care on Nauru or Christmas Island.

Included in an extensive list of recommendations, the report implores the government to establish a Royal Commission into the impact of detention on children, as well as:

• Release all children and their families into community detention or the community on bridging visas with a right to work
• Enact Legislation to ensure that children may be detained under the Migration Act for only so long as is necessary for health, identity and security checks
• Not send any child offshore for processing unless it is clear that their human rights will be respected
• Appoint an independent guardian for unaccompanied children seeking asylum in Australia
• Provide alternative community detention for children of families assessed as security risks
• Provide access to government funded mental health support for children currently or previously detained at any time since 1992
• Assess children in detention who were denied education on Christmas Island for a year to determine what educational support they require

In public hearings during the course of the inquiry, Commission President Gillian Triggs pushed immigration officials – and then Minister Scott Morrison – to explain what purpose detaining children serves.

The report follows up on the responses the Commission received, and observes that:

“Both the former and current Ministers for Immigration agreed that holding children for prolonged periods in remote detention centres, does not deter people smugglers or asylum seekers. There appears to be no rational explanation for the prolonged detention of children.”

Responses collected from children in detention reveal they overwhelming believe their treatment is intended as a form of punishment, despite the fact they have sought asylum and not been convicted of breaking any law.

A 13-year-old being held in the Blaydin Detention Centre told the commission: “I’m just a kid, I haven’t done anything wrong. They are putting me in a jail. We can’t talk with Australian people.”

The report is particularly critical of the treatment of children sent to Nauru who, as New Matilda has reported previously, face serious challenges and even violence after their release.

The report raises serious concerns that little or no attention is paid to mitigating circumstances, even when a child arrives unaccompanied.

“By the Department’s own explanation, the best interests of an individual child has no bearing on whether that child is to be transferred to Nauru,” the report states. 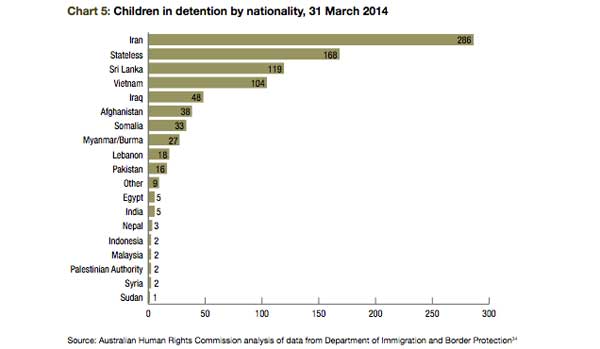 The report also found that “all 27 unaccompanied children who were assessed under the Department’s Best Interest Assessment process between 1 January 2014 and 31 March 2014 were recommended for transfer to Nauru on the basis of almost identical generalised statements of reasons.”

Despite this, the report then states: “It is unclear how Departmental officers made these findings as none of the Best Interest Assessments document any individualised assessment of the unaccompanied child’s educational, care, welfare and service-related needs. There is also no information provided about the quality of the facilities and services on Nauru to support the findings that these facilities and services are appropriate to support that child’s needs.”

Despite extreme heat, outbreaks of lice and gastroenteritis, inadequate pre-transfer health screenings, leaky accommodation, and regular reports of sexual assault, the report notes that vulnerable people have been transferred to the island.

“A doctor who worked on Christmas Island told the Inquiry that a woman understood to be pregnant with twins and a 4-year-old boy with cerebral palsy were sent to Nauru,” it says.

A submission from advocacy group ChilOut said women on Nauru who had fallen pregnant had been flying to Australia in order to have terminations.

“In all four cases, the women have expressed that if it were not for their immigration detention on Nauru, they would very much want to have these babies,” the submission said. 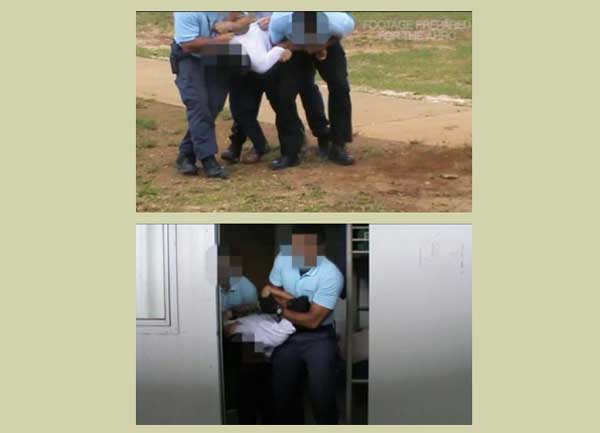 In one of the public hearings, the Commission was told children had been forcibly restrained in wristlocks and chokeholds by Serco guards.

Video examined by the Commission did not show evidence of the biting, spitting or resistance on the part of the boys involved, as recorded in the Serco incident report.

However, the Commission found there is insufficient evidence before the Inquiry to determine whether the use of force by the Serco officers was more than strictly necessary. 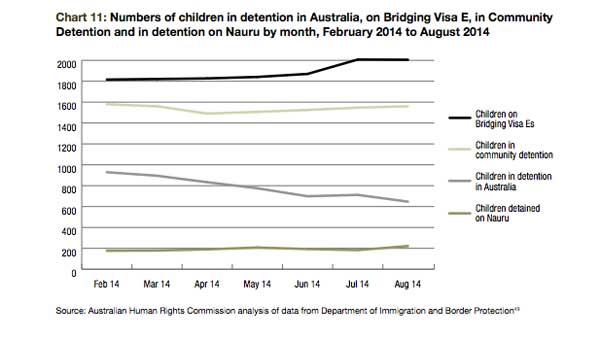 People Are Being Released, But Many Have Already Been Held Too Long

In the period covered by the report the number of children in detention fell, but the average period of incarceration increased.

In contrast to countries like Sweden and the UK where detention generally lasts under 72 hours, children held in Australian immigration detention on 1 March 2014 had been held for an average of 231 days.

But the report acknowledges that since the Coalition government came to power the number of children in detention has steadily declined.

Detention data released by the Department earlier today shows the number of children in onshore detention had fallen to 211 by January 31, down from a peak of over 1,500 mid-2013. This excludes those on Nauru.

Department Did Not Provide Nauru Documents

The report also says the Department of Immigration refused to provide the Commission with certain documents and information relating to detention on the island, claiming they exceeded the Inquiry’s terms of reference.

According to Claire Hammerton, Campaign Coordinator of ChilOut, the decision to prevent access to Nauru was a disappointing one.

“The children in detention on Nauru are living in tents in extremely hot and crowded conditions,” she said.

“They are denied any right to privacy, and many are struggling to maintain even the most basic hygiene levels with water shortages resulting in limited shower time and a lack of clean clothes.

“The physical conditions of the camp on Nauru has led to an increase in rates of respiratory illnesses from the high levels of dust, and few children are provided with adequate footwear or sun protection.

“Those in detention are also denied the right to an adequate education, with insufficient books and lesson plans, as well as crowded teaching rooms that regularly reach between 40-50 degrees. The conditions these children are forced to endure is a shameful indictment on Australia.”

The Commission was also clearly unhappy with the decision.

“Given the limited timeframe for the Inquiry, the Commission did not take any further steps in relation to the refusal by the Department to fully comply with the statutory notice,” the report says.

Another of the report’s major findings is that the Minister for Immigration has failed to act in the best interests of unaccompanied children by not releasing them into community alternatives to detention.

When unaccompanied children arrive in Australia the Minister takes on guardianship, but the report found this role gives rise to a conflict of interest.

Under current policy (established by Labor), unaccompanied children who arrive in Australia by boat continue to be sent to Nauru, where they are taken into detention. This means the Minister’s last act as legal guardian is to send them offshore.