My name is Donald Robertson and Brian was my friend. Our friendship went back nearly 40 years and actually started less than a mile south of here, in Donegal St, Norwood.

It was the late 70s. I’d come back from two-and-a-half years in the U.K. with a rabid enthusiasm for punk rock and new wave music and in the do-it-yourself spirit of the times, started a music magazine called Roadrunner.

Brian was working at Australian Associated Press in Waymouth St as a journalist, as was my Donegal St housemate Larry Buttrose. As Larry commented on Facebook the other week when I posted about Brian’s passing:

Brian was a very fine man and a terrific journalist. I remember meeting him when I was a cadet journo and thinking “Oh, so this is what a real journalist is like”. He had a great intellect, a sharp wit, and as a writer he was fearless.

Larry introduced us and we hit it off. We were both Ten Pound Scots (note, not Poms) dumped in migrant communities — him in Elizabeth and me in Whyalla — who loved music and had made our way into the media.

Brian grew up with many of the leading lights of the burgeoning Elizabeth music scene — Jimmy Barnes, John Swan, Doc Neeson and Chris Bailey of the Angels, Ronnie Peers from Pulse — and also had strong friendships with stalwarts of the Adelaide scene like Barry McCaskill and Peter Beagley. I always appreciated his ear for music.

He’d started in journalism at the (Adelaide) News, dabbled in alternative lifestyles — as many of us did in the early 70s — at Fred Robinson’s commune outside Perth, but was now back in Adelaide, married with two young boys, Heath and Robbie.

Brian wrote a series of articles about the music industry in Adelaide for Roadrunner, plus a hilarious account of the media shenanigans surrounding the Stranglers 1979 Australian tour (not Mike Willesee or Molly Meldrum’s finest hour). His writing gave the magazine some welcome authority and credibility in those early days.

Our friend Larry went off on an extended overseas holiday and Brian rented his room at Donegal St for a while. He was having difficulties at home and used to use it as a refuge or safe house. Despite the turmoil in his life, he always appeared cool, calm and collected and was never less than convivial company.

Brian decided to take a job with AAP in Darwin and found himself slap bang in the middle of the biggest Australian scandal of the century. As he later wrote, “I had the great misfortune to cover the disappearance of Azaria Chamberlain from a campground at Ayers Rock in August 1980. I also covered both of the Alice Springs coronial inquests into her death and the subsequent murder trial of her mother Lindy and father Michael.”

In a gripping Online Opinion piece published over 10 years ago (and still available online) Brian recalled his battle to counter the lurid stories about the Chamberlains appearing in the yellow press down south, and how his mounting personal unease about the outcome led him to share his misgivings with then Territory Opposition Leader, Bob Collins. 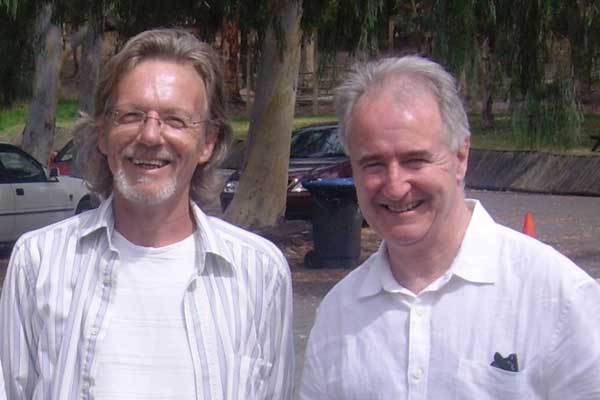 Based on material provided by Brian that raised concerns about the forensic evidence, Collins decided to champion the cause of the Chamberlains. Lindy Chamberlain later said in her autobiography that if it were not for Collins’ intervention, she would still be languishing in Darwin’s Berrimah jail.

It was the beginning of one of Brian’s most important working relationships.

It was also in this period that Brian met the love of his life, Geri. At the time Brian lived on the first floor of a house in Darwin, with the AAP office on the ground floor. Geri remembers at the height of the madness there being so much paper spewing out of the telex machines it was spilling out of the downstairs office door.

I caught up with Brian in Darwin in late 1985 when I was covering the INXS Listen Like Thieves tour. He’d just taken up the position of press secretary to Bob Collins, but was still buzzing about the survival tale of Val Plumwood, a Sydney University lecturer mauled by a saltwater crocodile in the Kakadu National Park.

Plumwood had been alone in a canoe, in torrential rain, going down a creek in Kakadu when a croc attacked, capsizing her boat. She managed to grab hold of an overhanging branch, but the croc persisted in its attack, taking her under the water in a death roll three times before she managed to break free.

In my account of the tour I wrote, “Brian’s eyes shone with the zeal of a true journalist telling another amazing story. ‘Three times,’ he kept saying in wonderment. ‘How would you be?’”

Geri told me just the other day that Brian had got the first interview with Plumwood by writing her a very nice letter when she was still recovering in hospital.

And just last year, at a café just down the road in Dulwich, Brian reeled off another tall Territory tale, the saga of the Kimberley Killer, Josef Schwab. Schwab, a deranged German tourist, went on a killing spree across the Top End, killing five innocent people before being tracked to Fitzroy Crossing across the Western Australia border.

Brian and a posse of other Darwin journos jumped in a car and headed off on the 1500-kilometre, 17-hour trip to Fitzroy Crossing. Arriving in town, the other journos crashed out, but Brian spied a light on in a mechanic’s workshop, wandered over, introduced himself and casually asked if the mechanic knew where the police had cornered the killer.

“Sure mate, do you want me to take you out there?”

So the mechanic drove Brian to the scene where the police had killed Schwab in a shootout. Brian had just finished phoning his scoop through to the news desk in Melbourne on the town’s only public phone box when the rest of the journos woke up.

A few years later I sat in Brian’s office in Parliament House Canberra, when he was press secretary to Senator Bob Collins, and listened as he tore strips off a hapless ABC Lateline producer over the phone. The conversation went something like this.

“Why would Bob go on your program?” Muffled squawk on the other end. “You have no credibility.” Squawking rising in pitch. “You are a joke.” Squawk. “Goodbye.” Then turning to me, “Now where were we?”

As the newly minted media advisor to Brian Johns, inaugural Chairman of the Australian Broadcasting Authority, I had a similar reaction to Larry years before. “Oh, so this is what a real press secretary is like!”

For it was a key part of Brian’s make-up that even when he was churning out some ripper yarns for AAP in the Northern Territory, he held the media accountable. As someone who set and abided by high journalistic standards, he did not hesitate to point out when others failed the test.

In his time with Bob Collins and later, in his work with the Aboriginal and Torres Strait Islander Commission and the NSW Aboriginal Land Council, this was a never-ending and often thankless task that nonetheless he pursued with dogged determination.

That was all part and parcel of his role of managing communications — a role he invariably prosecuted with energy and distinction. But his contribution was much, much more than that.

He consistently provided sage strategic advice. As Warwick Stanley posted on Facebook the other day, his old political adversary Shane Stone — the former Northern Territory Chief Minister — reckoned Brian had the sharpest political mind in the land. He was a tireless campaigner on Indigenous issues for more than 30 years.

My wife Di and I, with our son Calum, visited many times with him and Geri in Canberra and Queanbeyan and then Gumeracha and Adelaide when they moved back here to South Australia.

He was a wonderful person, funny, dry, smart, strong-willed, great company and a fount of fascinating stories. I’m going to miss him a lot.

* Donald Robertson is a prominent Australian music journalist. You can find out more about Roadrunner here.