Earlier this morning, the nation’s breakfast hosts assembled on the lawns of Parliament House, expecting an uninterrupted broadcast of the day’s top story.

The fate of Tony Abbott, not only the Prime Minister, but also the self-appointed ‘Prime Minister for Indigenous Affairs’ attracted the likes of Karl Stefanovic, Lisa Wilkinson, David Koch, Samantha Armytage and ‘that guy from Channel Ten’ (Hugh Riminton), all broadcasting alongside each other in makeshift studios open to the elements.

What the mainstream media weren’t aware of was that for months, there had been a Freedom Summit sit-in organised by Aboriginal leaders pushing for sovereignty and treaty, to be held to mark the first day of Parliament for the year.

What they also weren’t aware of was a strong delegation of grandmothers who had descended on the Aboriginal Tent Embassy in Canberra to protest the skyrocketing rates of child removal that have risen every year since Kevin Rudd said “Sorry”.

The anniversary of the apology is this Friday.

While breakfast television reported on the nation’s top story, there was a much more urgent story unfolding right behind them.

And it was one they by and large ignored.

This morning, about 100 protestors walked the short path from the Aboriginal Tent Embassy to Parliament House, where they took advantage of the media furore and hijacked the photogenic backdrop. 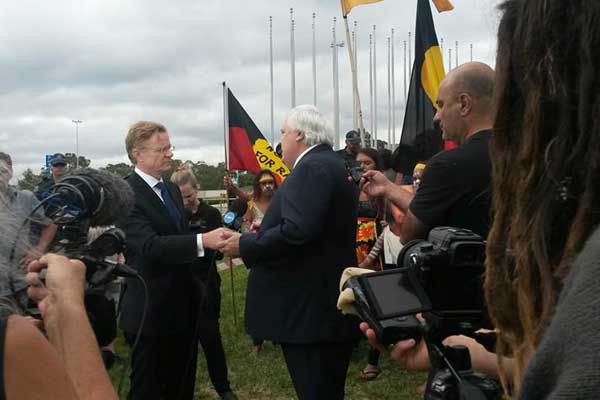 An almost blank Armytage largely ignored the rally, while ‘Kochie’ took a short coffee break to admonish those in attendance, telling them to look up his charities before addressing him personally.

“Our people are suffering!” one woman cried back at him.

Protestors later drowned out Clive Palmer as he was being interviewed by Wilkinson and Stefanovic. Not only were they calling for the return of the thousands of Aboriginal and Torres Strait Islander children, but also justice for black deaths in custody.

A small girl held a picture of the 22-year-old Yamitji woman Julieka Dhu, who suffered excruciating pain for three days whilst in custody and died after being refused hospital care last year. She had been arrested and jailed for unpaid fines.

Her uncle, Shaun Harris, travelled from Geraldton in Western Australia and has camped at the tent embassy for two weeks to raise awareness of her death.

Julieka’s face was beamed across the nation behind the shoulders of Clive Palmer, a miner who made his wealth from ripping resources off the stolen land of Aboriginal people.

“Loan us $20 Clive,” one protestor asked him. Palmer reportedly replied he had no money on him.

As the protestors drowned out Channel Nine’s coverage, the crew took a break to discuss how they would handle it. A short while later, Stefanovic stepped off the stage and approached them.

“I’m not going to bullshit you,” he said.

After 11, Stefanovic was nowhere to be seen.

News broke that Abbott had survived, but it was largely brushed off by the protestors.

The 24-hour media cycle might clock the fate of politicians, but it does nothing to measure the trauma of slow justice which has been ticking over for 200 years.

The roundabout of leadership, whether Labor or Liberal, barely makes a difference to the thousands of Aboriginal families struggling to cope with the trauma of removed children, or those who have had loved ones die in police custody.

These rates have risen regardless of who is in government. Around 1 pm, as the talking heads left, a concerned Mel Doyle from Channel Seven approached the rally to make a deal with protestors, as she readied herself to take over the afternoon coverage.  According to Doyle, not only was she going to discuss the leadership spill, but also the victims of the Sydney siege, as if that shouldn’t be interrupted by Aboriginal protestors who only want to discuss sovereignty and stolen children.

She offered a compromise – if protestors were quiet, Channel Seven would run a story on the issues raised by the rally.

The rally agreed. Doyle left, and then a short while later, workers began taking down the stage.

New Matilda did not hear of whether Channel Seven planned to run the story.

But if the media had stuck around, and bothered to cover the real story, which was only two metres behind them, they would have heard from the strong Aboriginal women who are trying to wrangle back control of their future, and the future of their children.

Women like Vanessa Colbung, Karen Fusi, Jennifer Swan and Debbie Swan, who have travelled from all around the country to demand the return of their children as part of the various Grandmothers Against Removals groups which now have branches across Australia.

The latest statistics are urgent.

Debra Swan, who worked in child protection in NSW for 13 years before she quit after her sister’s grandchildren were removed, told New Matilda it wasn’t a new Stolen Generations.

“The Stolen Generations never stopped. It’s a continuation. They just changed the language of it.”

Her sister, Jennifer, who is fighting for the care of her grandchildren, remembers vividly where she was when Kevin Rudd said sorry.

“We had tears in our eyes. I thought ‘I would never want to go through that, then it happens to me [a few]years later.” 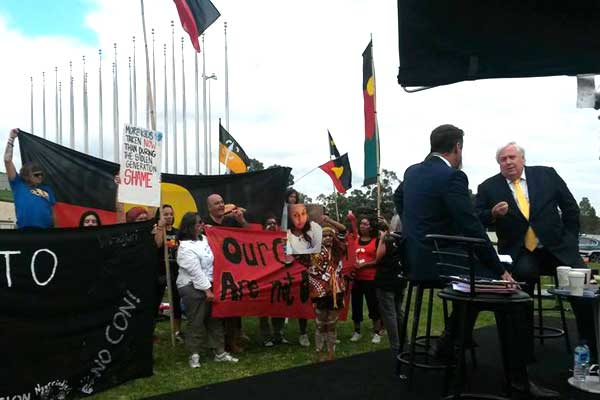 To the millions who saw the red, black and yellow flags blocking out Parliament House on morning broadcasts, these protestors were just a backdrop. They were pictures. But there are stories of heartbreak and hurt in every person who let their frustration spill out on screen.

Unfortunately whilst mainstream media concentrated on the political future of a man who has done nothing for this nation’s most vulnerable, the other, more urgent story came to them. And they were too blind to see it.

In the midst of this, eight delegates from the Freedom Summit won a meeting with Indigenous affairs minister Nigel Scullion, who later met the protestors at the rally. Aunty Jenny Munro told the rally it was the beginning of “a dialogue, a process”.

According to Les Coe, who attended the meeting, the issue at the centre of the protest was “power and control”.

“We don’t care who is the leader. They are all the same. We want to talk about power and control over our lives.

“We want to talk about power and control over our kids future.”

It’s a shame so few people – in particular media – are prepared to listen.