The Israeli government is undoubtedly rubbing its hands together with glee. Their local propagandists throughout Australia are eagerly awaiting their talking points. Any hopes of holding Israel accountable for its latest massacre in Gaza have basically vanished, and the path is effectively being cleared for a new round of horrors.

Over the course of several weeks last year, Israel unleashed hell on Gaza. It killed more than 2,200 Palestinians, including hundreds of children. It destroyed and badly damaged about 18,000 homes, rendering about 100,000 homeless. It resumed its attack on Gaza’s electricity supplies, further reducing the access of Gazans to clean water.

The destruction is really indescribable – there are pictures published by the United Nations and others, showing entire suburbs reduced to rubble.

As usually happens after such events, the United Nations decided to inquire into what happened. In August last year, it appointed a respected Canadian legal academic with Jewish ancestry to lead the inquiry, William Schabas.

As a scholar on human rights issues and international criminal law, Schabas had unsurprisingly voiced opinions critical of the Israeli government, such as suggesting that Prime Minister Netanyahu should be put in the dock at the International Criminal Court. However, he said that this position should not be overstated: “I didn’t say he was guilty of anything.” Schabas denied being “anti-Israel” (whatever that means), and is a member of the editorial board of the Israel Law Review. This may be compared to his work on a “truth commission” which investigated allegations of human rights abuses in Iran. On that occasion, the commission found “the Islamic Republic of Iran” the “only authority responsible for these acts”.

So does this make Schabas biased against Israel? It all depends on what you consider constitutes bias. If expressing an opinion on Israeli actions in the past constitutes bias, then Schabas was biased. But if this is bias, we can also dismiss every Amnesty International or Human Rights Watch report. Why should North Korea listen to Amnesty, when it’s been criticised by them before? The fallacy is obvious: those who work in a human rights field don’t do anything illegitimate by coming to certain conclusions, unless the path to that conclusion itself was illegitimate.

Reaching unfavourable conclusions only show bias, if those conclusions were illegitimately unfavourable. To demonstrate that Schabas could not investigate the facts fairly and impartially would be a demonstration of bias. If there was a certain predisposition one way or another – such as, if Schabas were married to a leader of Hamas or the Israeli government – one might expect that kind of attachment to influence his findings. Showing that Schabas has said something critical of Israel in the past would only demonstrate bias, only on the assumption that no fair and impartial investigation of the actions of Israel could reach that conclusion.

Some Israelis found this argument compelling, but it did not impress many others. As is traditional, once Schabas was appointed, Israel and its loyal propagandists around the world began their battle to discredit the report before it was written. With customary restraint, the Israeli Prime Minister announced that the United Nations Human Rights Council was, in fact, a “terrorist rights council”.

Denouncing investigations by the UN and human rights organisations is kind of a national pastime in Israel. And elsewhere, for that matter. Back in 2009, after that year’s Gaza massacre ended, the UN appointed a famous inquiry led by Richard Goldstone. The Australian Jewish News warned in an editorial one week that it should be taken “very seriously” – before flip flopping the next. Still, the first editorial warned against “The boilerplate argument that the report should not be taken seriously because the UN has a historic bias against Israel”.

Under heavy pressure, Goldstone later distanced himself from the report he led the way in writing. That distancing helped clear the way for Israel’s later massacres, such as the one last year. This time, Israeli propagandists have had another great success, and much earlier too.

Israel sent a letter to the UN Human Rights Council, noting that Schabas once wrote a legal opinion for the PLO, for which he was paid $1,300. Schabas doesn’t think that this has discredited him, but claimed that the situation had become “unbearable” for him, and that by resigning, he will prevent personal attacks overshadowing the substance of the report.

Schabas has commented that the opinion he was paid to give was “of a technical legal nature”, so Israel’s alleged concern about the letter is not about its substance, but that because of the exchange of money, Schabas had a “blatant conflict of interest”. It might be a little bit hard for some to understand why doing paid work for an organisation once would forever make it impossible to have an unbiased opinion about that organisation, but really, all that’s ever needed is a little bit of mud and the hope that some of it will stick.

No matter who was appointed by the UN, Israel was always going to do what it could to discredit the appointment, and proclaim that the new appointee was notoriously biased against Israel. The problem, of course, is that any serious investigation of how Israel treats the Palestinians is going to come to unpleasant conclusions, because what Israel has done to them is unconscionable. Gideon Levy commented that that anyone who wasn’t shocked by Israel’s attack on Gaza last year:

deserves to be condemned, have their character assassinated and their past scrutinized. They either live in blindness, denial and repression, or their moral standards are fundamentally distorted and flawed.

It was impossible not to be appalled by what the Israel Defense Forces did in Gaza last summer – unless you’re a propagandist, a liar or a racist. 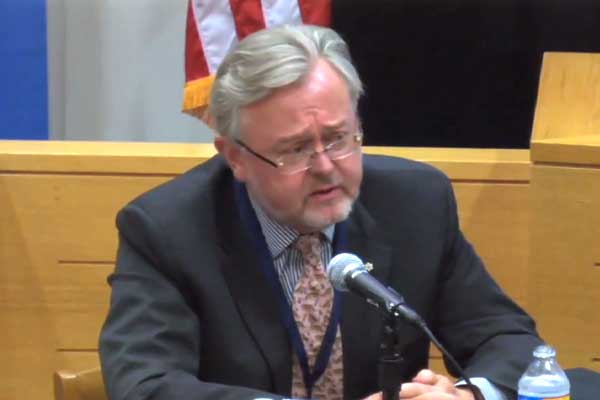 Israel is already crowing over its victory. Netanyahu predictably declared that “After the resignation of the committee chairman, who was biased against Israel, the report must not be published”. When the report comes out, Israel will already have its stick to beat it with. Israel refused to cooperate with the inquiry when Schabas led it. As noted in a Ha’aretz editorial, Israel still refuses to cooperate with it.

The report noted that these attacks were because of a “policy of attacking homes”, supported by a “broad definition” of a valid “military objective” for targeting, and a “flexible interpretation of the concept of ‘collateral damage’”.

The Israeli NGO Physicians for Human Rights also released a report. It found there were serious violations of human rights law. For example, there was “heavy and unpredictable bombardments of civilian neighbourhoods in a manner that failed to discriminate between legitimate targets and protected populations and caused widespread destruction of homes and property”. These attacks “must have entailed approval from top-level decision-makers in the Israeli military and/or government”. There is also Israel’s continued use of the “double tap” strike – whereby, after Israel bombs an area, it waits a little while before bombing again, the second strike killing medical workers, loved ones and others who attended to the scene of the first strike.

Harvard specialist on Gaza, Sara Roy observed that in three decades of studying Gaza, she has “never seen the kind of physical and psychological destruction that I see there today”.

A whole indigenous economy has been all but destroyed, with extensive damage to civilian infrastructure; Gazan society has been reduced to almost complete aid dependence. It has also been radically economically levelled, with the virtual destruction of its middle class and the emergence of a broad new class of “poor”.

Gaza’s social fabric has greatly weakened, and is now characterised by a new kind of fragility and disempowerment; entire neighbourhoods have been eliminated, and their community life destroyed.

Roy observed that the supposed plans for reconstructing Gaza after the devastation imposed on it by Israel “read more like security plans” for Israel, explaining how the UN will address Israel’s concerns. Meanwhile, the blockade of Gaza was to be “strengthened”, whilst the UN was to take on responsibility for maintaining the siege. Israel took on zero financial responsibility for reconstruction – this was left to the international community. In short, another triumph for Israel.

The devastation of the attack and ongoing siege was worsened with floods in November, with the UN declaring a “state of emergency” in Gaza. Meanwhile, three Palestinians, including two infants, were reported as having frozen to death in Gaza, due to a lack of public shelter. I’m sure their families will take heart from the fact that the reconstruction process has been properly taking into account Israel’s “security concerns”, which is presumably why they didn’t have homes in the first place.

As for the UN inquiry, it is going ahead with a new head, former New York judge Mary McGowan-Davis. Israel has decided she’s more “balanced”, because the inquiry she led into the follow up to the Goldstone Report supposedly convinced Goldstone that the conclusions of his report had been wrong.

In fact, the report plainly did no such thing. I reviewed it in May 2011. The conclusions were not particularly damning. In part, this was because Israel was purporting to investigate allegations of human rights violations at the time, and McGowan-Davis’s report didn’t dismiss all such investigations in advance (unlike another government we might be able to think of).

At the time, Israel refused to cooperate with her investigation. Her report complained that Israel wasn’t investigating “those who designed, planned, ordered and oversaw Operation Cast Lead”, and held that the “appropriate mechanism” for investigations was a “public commission”, not the Military Attorney General.

As for the credibility of the process, McGowan-Davis’s report observed that whilst one soldier was sentenced to seven months imprisonment for stealing a credit card, two soldiers who used a child as a human shield received suspended sentences of three months, and were demoted. That was their punishment – and that exhausts the list of Israelis who were held accountable for atrocities committed during the massacre in Gaza from 2008-9.

The report observed that “as long as victims – in Israel and in Gaza – continue to lack confidence in the investigative processes, and continue to live in difficult and unsafe conditions, without remedy, there will be no genuine accountability and no justice”.

Whilst McGowan-Davis had grounds for drawing stronger conclusions, her report still had valuable information. However, it was, like so many other reports on Israel, mostly ignored, and almost entirely unread.

Which is the path we can expect for her next report on Gaza. Israel will argue the whole process is tainted, and will claim vindication in the resignation of Schabas. He resigned because Israel produced what it regarded as irrefutable evidence of his bias, and every news story on the report will note that the process involved a different leader, who resigned in the wake of accusations of bias.

Few will read that report, just as few read McGowan-Davis’s report in 2011. All most took from the Goldstone Report was that it condemned both sides and was written by a respected Jewish Zionist. And then, when he distanced himself from it, that was the end of the Goldstone Report in the mainstream media.

This time around, Israel’s talking points have been neatly lined up for it, and soon there will be an avalanche of bullshit, as its propagandists around the world do their best to prevent Israel being held accountable for another slaughter in Gaza, and a continuation of the siege.

And they can pat themselves on the back, for their tremendous victory, as Gazans freeze to death because Israel won’t let them rebuild their homes. What a wonderful triumph.