Hold the phone First Dog – satire may be dead under Tony Abbott, but if Mal Brough, the Member for Fisher, has his way it will come rocketing back into the charts.

Following the stunning defeat of Campbell Newman at the state election in Queensland, former Howard Government minister Brough has popped his head above the trenches in order to refuse to deny rumours that he’s been asked to launch a leadership tilt against the Prime Minister.

Brough’s ‘threat’ is not really a tilt at the leadership – the party may have been silly enough to elect Abbott as leader in Opposition, but it’s impossible to believe they’d be mad enough to elect Brough while in office.

Thus, Brough’s strategy is in fact to open the way for a challenge against Abbott, enable other credible candidates to have a lash, and then demand a return of the favour with a seat back in the new cabinet.

This, folks, is champagne Mal Brough – all sizzle, no sausage. He had many nicknames during his time as Minister for Indigenous Affairs, but perhaps the most appropriate in light of the current news story is ‘Sideshow Mal’ (because a circus followed him everywhere).

It’s also quite surprising – Abbott was one of the key endorsers of Brough for the seat of Fisher, while Malcolm Turnbull and Julie Bishop endorsed a Brough rival. Oh what a tangled and disloyal Liberal web we weave.

Most pundits had predicted that Brough’s slimy backroom involvement in the Ashby-Slipper scandal would forever render him ‘minister non grata’. But what Brough lacks in credibility, he more than makes up for in pure, naked ambition. 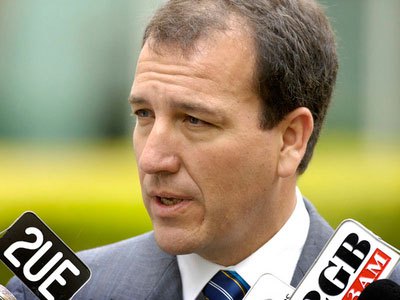 The Community Development Employment Program – aka the black work for the dole – was designed and run by Aboriginal people, and had been chugging away relatively successfully for more than three decades.

Enter Mal Brough, who decided in 2006 that CDEP had become a “destination” rather than a “path to real employment”.

He began abolishing CDEP in remote regions, despite the fact CDEP was the ONLY source of employment in impoverished towns, not to mention the major funder of basic services.

Aboriginal unemployment when Brough left office was at near record levels. This recent piece from Professor Jon Altman outlines the scale of the destruction left in Brough’s wake (and ably added to by his successor, Jenny Macklin). 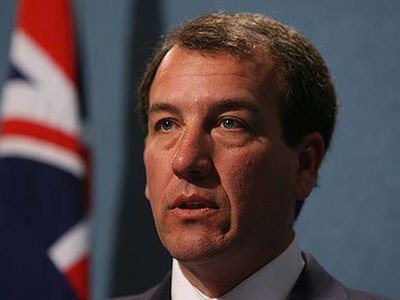 In 2007, Brough decided Aboriginal people were at risk of becoming communists, because they couldn’t purchase their own homes on collectively owned Aboriginal land in remote areas.

So, after amending the NT Aboriginal Land Rights Act in the NT, Brough unveiled the Home Ownership on Indigenous Lands program (HOIL), a government-funded scheme aimed at helping blackfellas buy a plot of land they already owned.

He quarantined $100 million in government funding for HOIL while at the same time underfunded the highly successful Home Ownership Program (which enabled Aboriginal people anywhere in the country to access home loans).

Finally, after five years of operation, Brough’s HOIL was quietly shelved and the money diverted into HOP. The HOP waiting list dropped instantly from 1,500 to just over 400 – that’s more than 1,000 Aboriginal families into home ownership almost overnight.

And the cost of Brough’s HOIL adventure? $10 million to administer a program that provided just 15 loans worth $2.7 million. 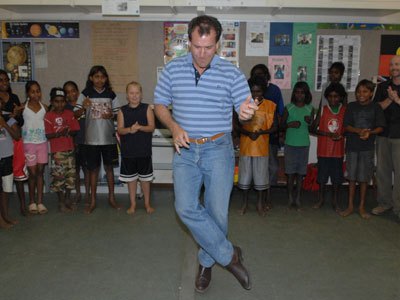 Brough spent much of his time as Minister for Indigenous Affairs pounding the state and territory Labor governments for their poor performance in Indigenous affairs. A good thing too – they were all atrocious.

But at the same time, in 2006-07 his department underspent the Indigenous affairs budget by a staggering $600 million, one-fifth of the total budget. This in the same year that Brough declared “a national emergency” in NT Aboriginal communities. 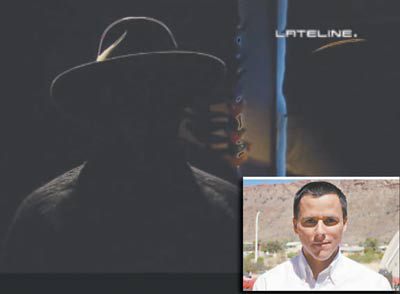 Who could forget Brough’s role in the Lateline reporting fiasco which helped spark the Northern Territory intervention.

In May 2006, Lateline broadcast a story entitled ‘Sexual slavery reported in Indigenous community’.

It featured a witness who appeared with his face blacked out and his voice digitized, and who backed earlier claims by Brough (and rubbished widely) that paedophile rings were rife in Aboriginal communities.

Lateline falsely described the man as an “anonymous youth worker” but it later emerged he was, in fact, Gregory Andrews, an Assistant Secretary in Brough’s department. Andrews’ job was to advise the minister on issues of child abuse in Aboriginal communities. He has since been rewarded by the Abbott Government with the plum job of Threatened Species Commissioner.

Brough always denied any knowledge of Andrews’ appearance on Lateline, but in later court proceedings it emerged his office was provided a written brief of what the bureaucrat planned to tell Lateline.

Brough used the story – and Lateline – to drive support for the NT intervention, a policy that endures today, and is still wreaking havoc on Aboriginal communities. 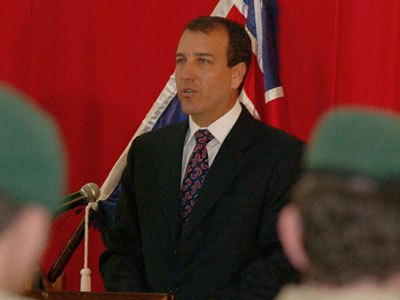 And speaking of the NT intervention, eight years on from the policy that defined Brough’s time as minister, school attendance has dropped, attempt suicide and self harm rates have increased five-fold, and there’s been a more than doubling in reports of violent incidents.

All the while the incarceration rate has soared to almost 90 percent of the prison population.

Brough has the luxury of not being able to be held accountable for the failings of the NT intervention – he was, after all, cast from office five months after it was launched.

But Brough IS responsible for the implementation of the intervention, and on that front things aren’t pretty.

A parliamentary inquiry found its implementation was very poor – apart from alienating Aboriginal people and providing no emergency accommodation for anyone but police and soldiers, it caused widespread starvation among Aboriginal communities. 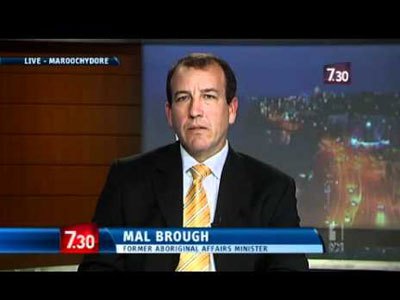 Perhaps his most startling ‘deny deny deny’ moment came when he walked out of a roundtable summit on Aboriginal violence in 2006, and told media a senior person in the meeting had revealed things were so bad in NT Aboriginal communities that $1 million in cash had been found in one remote town, the proceeds from the sale of drugs.

One million in cash? In a remote community? Really?

Amid Brough denials, the story, of course, collapsed. Anyone with 10 seconds experience of an Aboriginal community could tell you you’d have a better chance of finding life on the Moon than $1 million in cash in a poor black town.

It later transpired there was a drug bust in the NT, but it occurred in Darwin, the amount of cash involved was small, and the guy arrested was white, with no links to Aboriginal communities whatsoever.

When Brough became Minister for Indigenous Affairs, one of his first acts was to pinch $100,000 from the Aboriginals Benefit Account (which holds NT mining royalties on behalf of Traditional Owners) and provide it to the organisers of the Woodford Folk Festival, in Queensland.

By law, ABA funds must be spent for the benefit of Territory Aborigines.

Brough wasn’t the first politician to pork-barrel with ABA funds, but he was definitely the first one to do it outside NT. In case you were wondering, Woodford was in Brough’s then-electorate of Longman.

The ABA proved irresistible to Brough while in office. His most spectacular raid was undoubtedly the $4 million he pinched to upgrade the Alice Springs Aquatic Centre, a pool owned by the Alice Springs town council.

At the same time, Brough attacked Traditional Owners repeatedly for what he claimed was the irresponsible expenditure of mining royalty monies. 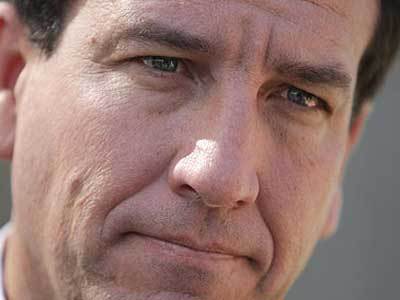 Even after leaving the job, Brough couldn’t let go. Having amended the NT Aboriginal Land Rights Act in 2006 to allow whitefellas to buy Aboriginal land, Brough found himself out of parliament.

So he boarded a flight to the Tiwi Islands, and tried to convince locals to enter into a joint venture with him, which involved signing over their land.

The deal was blocked by the Rudd government.

In true Brough style, he simply made up the media script to suit the political winds, telling The Australian newspaper on February 8, 2008 (while the deal was still on) that he was “seeking to make a profit from – and lend a hand to – the islanders”, then later when the deal was shot telling the Sydney Morning Herald he never stood to “make one cent out of it” and that the Rudd government was playing politics with the lives of Aboriginal people. 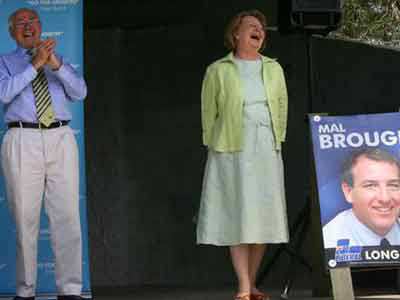 Brough’s failings in Aboriginal affairs went beyond bad policy and media silliness. There was also plenty of inaction.

The most stark occurred in 2006, after Brough promised more than 80 demountable buildings from the recently closed Woomera detention centre would be urgently installed in remote Aboriginal communities as emergency housing.

By the time he left office 18 months later, not one demountable had been installed.

Instead, they sat rusting in an Alice Springs industrial yard until the Rudd government finally sent them north in 2008… as emergency accommodation for asylum seekers on Christmas Island.

Today, the average number of Aboriginal people per dwelling in the NT remains at around 9.4 persons per dwelling, the same level it was when Brough entered office.

This is despite the expenditure of at least one billion dollars on Aboriginal housing across the Territory over six years, and despite the fact that the NT intervention housing program he established – the Strategic Indigenous Housing Initiatives Program – managed to spend more than $120 million in two years, without constructing a single home.